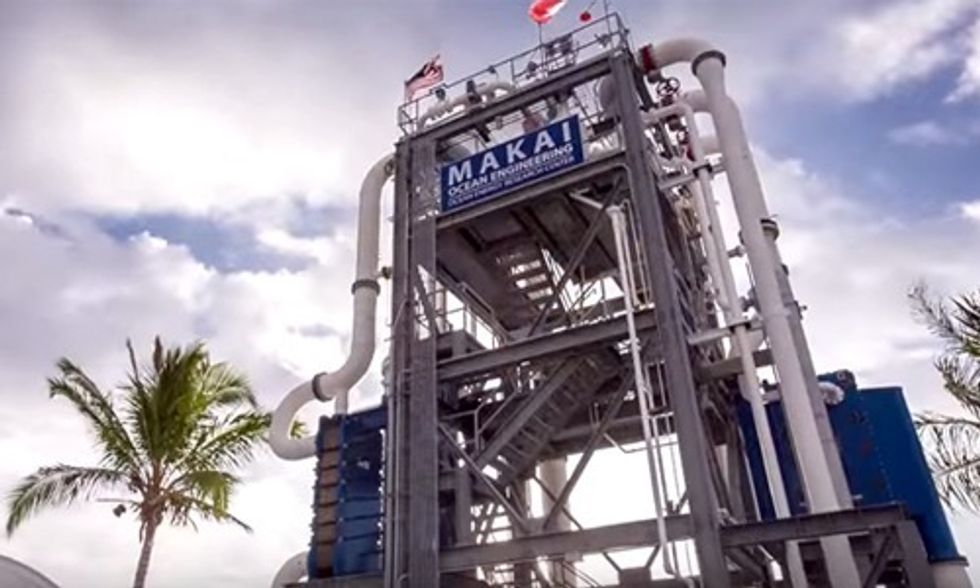 Hawaii is definitely ahead of the curve when it comes to renewable energy. In June, the Aloha state became the first state to mandate that all of its electricity come from renewable sources no later than 2045. Along with other islands, its charging ahead with wind, solar and smart grid systems. But now, the state is home to the first fully closed-cycle Ocean Thermal Energy Conversion (OTEC) plant in the U.S.

The ocean thermal energy plant in Hawaii is the first in the U.S. and the largest such plant in the world.

OTEC is "a process that can produce electricity by using the temperature difference between deep cold ocean water and warm tropical surface waters," Makai Ocean Engineering, the company that built the plant, explains on its website. "OTEC plants pump large quantities of deep cold seawater and surface seawater to run a power cycle and produce electricity." Makai touts OTEC as a constant, clean energy source that is "capable of providing massive levels of energy."

Watch this short video for an explanation of how it works:

Makai staff explain in the video that the potential for OTEC is immense because the source of the energy is just sunlight.

"About 70 percent of the sunlight coming to Earth lands on the ocean. Most of that is captured in the surface layers of the ocean water in the form of heat," says Duke Hartman, vice president of business development at Makai. "That's beautiful because we can extract that energy 24/7 and use that power any time we want it, totally eliminating the need for an energy storage system."

The 105-kilowatt demonstration plant on the Big Island, which cost about $5 million to build, only generates enough electricity to power 120 homes. But to date, it's the largest such plant in the world. And it's promising enough for the U.S. Navy to be investing in it. The Navy has a target for 50 percent of its shore-based energy to come from alternative sources in five years.

While the industry is still very much in its infancy, Makai believes it won't be long until it takes off.

“The plant is dispatchable, meaning the power can be ramped up and down quickly to accommodate fluctuating demand and intermittent power surges from solar and wind farms,” Hartman told Bloomberg.

The company estimates that all of Hawaii's electricity needs could be met by about 12 commercial-scale OTEC plants. They already have plans to construct a 1-megawatt facility in Japan, and Hartman says Brazil, Sri Lanka, the Maldives and West African nations all have potential.

“Anywhere tropical with deep water is ideal, especially if they import their fuel,” says Hartman.

The biggest challenge remains financing, explains Hartman. “We need a visionary investor to get us past the expensive pilot project into the large-scale commercial projects,” he said.

According to the company's website, an offshore commercial-scale OTEC plant could prevent burning roughly 1.3 million barrels of oil each year, produce electricity at roughly $0.20 per kilowatt-hour and prevent more than half a million tons of carbon emissions per year.