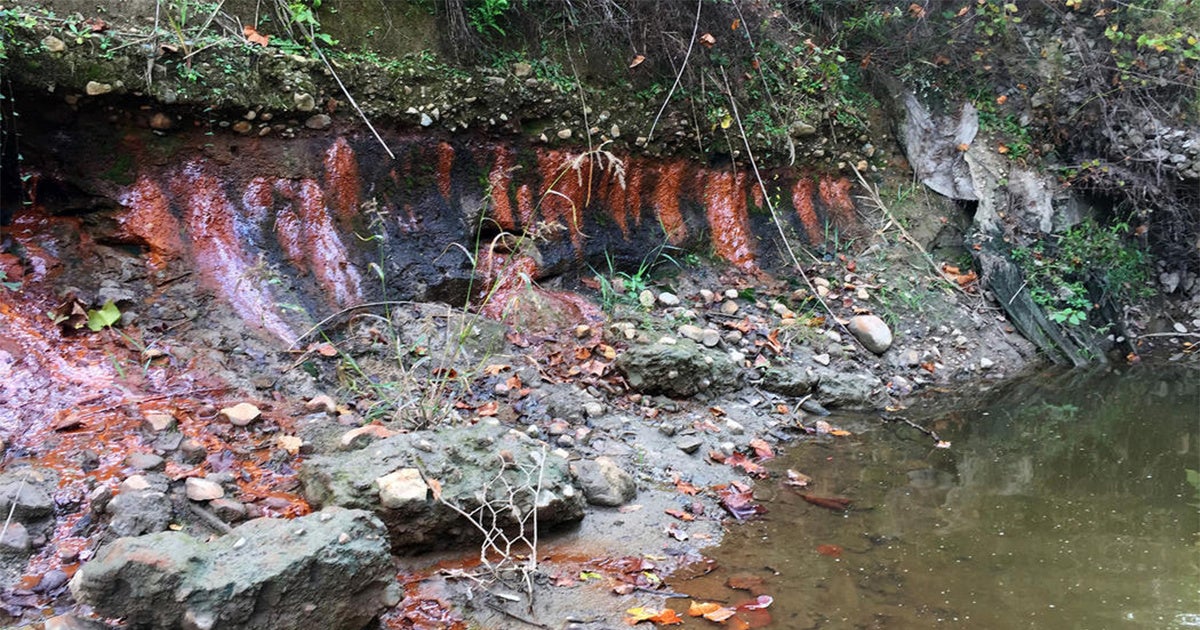 Toxic coal ash waste, the red material in the river bank, from Dynegy's Vermilion Power Plant in Oakwood, Illinois, can be seen leaking into the Middle Fork of the Vermilion River. Prairie Rivers Network

The report is based on industry data made publicly available for the first time this year because of a requirement in federal coal ash regulations. It concludes that 22 of Illinois 24 coal ash dumpsites with available data have released toxic pollutants including arsenic, cobalt and lithium, into groundwater.

Millions of tons of coal ash, generated by the State’s coal-fired power plants, has been stored in primarily unlined ponds and landfills near the plants for decades. This toxic byproduct of burning coal continues to flow into groundwater, rivers, and lakes all over the State, including the Middle Fork of the Vermilion River, Illinois’ only National Scenic River. Illinois started the process of regulating coal ash in 2013, but those plans were abandoned, and multiple administrations have allowed the coal ash ponds to operate for years with little or no state or federal oversight.

Local groups from all over the state are calling for action from State officials to put protections in place to stop the pollution from coal ash permanently, prevent further dumping or storage of coal ash in the state, and hold polluters accountable for the toxic messes they have created.

Andrew Rehn, a water resources engineer from Prairie Rivers Network, an advocacy group fighting for healthy rivers and clean water in Illinois said, “Illinois needs to act now to strengthen rules that protect the public from coal ash. We’re reaching a turning point as Energy companies are proposing to leave coal ash in floodplains of rivers and exposed to groundwater. We need stronger rules that provide permanent protection with a financial guarantee, and give the public a voice in these decisions”

“Because utilities were forced to report groundwater monitoring data in the 2015 coal ash rule, we now know the scope and severity of groundwater contamination from coal ash in Illinois,” said Earthjustice attorney Jennifer Cassel. “Now that communities can see the evidence of toxic pollution leaking into their precious groundwater resources from these ponds for themselves, they can hold utilities and the State accountable.”

“The contamination from coal ash is going to get worse, and will be a part of the Illinois environment for generations unless the state takes a few simple steps,” said Abel Russ, senior attorney with the Environmental Integrity Project. “We now have a baseline – almost all of the coal plants are polluted. Let’s hope that we can come back in ten years and see that most of these sites are clean.”

“Illinois cannot afford to stand by while companies dump toxic waste that will threaten our state’s valuable water resources indefinitely. There is a moral obligation to ensure that companies clean up the mess they create and lift that burden from impacted communities. Coal ash creates one more barrier to economic development while cleaning it up can create jobs and open the door to future development.” Joe Laszlo, Sierra Club Member and Central Illinois Healthy Community Alliance Chairperson

The report, Cap and Run: Toxic Coal Ash Left Behind by Big Polluters Threatens Illinois Water, features data released by power companies on their websites earlier this year in response to requirements in a 2015 EPA regulation known as the “coal ash rule.” Some of the local examples highlighted in the report include: