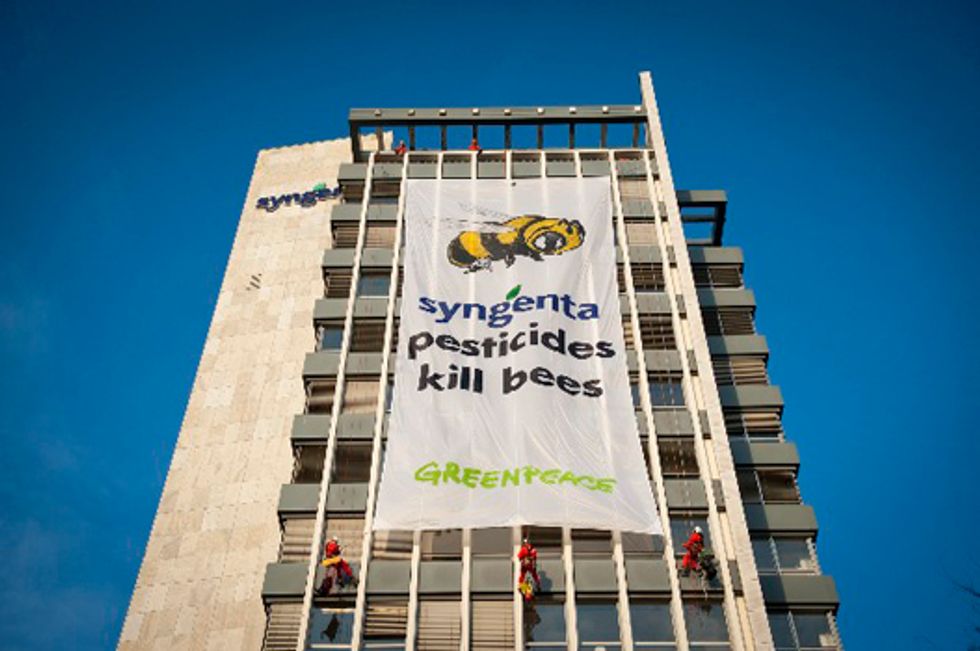 With the help of local activists, on April 17, Greenpeace Switzerland scaled the building at Syngenta's headquarters in Basel, Switzerland, and dropped a large banner proclaiming "Syngenta Pesticides Kill Bees." The global agrochemical company consistently denies that its pesticide products kill bees. For the last 15 years, in Europe and North America bees are dying at an alarming extent. Depending on the year and region, the mortality of bee colonies is up 53 percent.

Syngenta's products Actara and Cruiser contain the active ingredient thiamethoxam—a neonicotinoid—one of the pesticides most harmful to bees. With an annual turnover of $14.2 billion, Syngenta is the world's biggest seller of pesticides—neonicotinoids representing around 10 percent of total sales. Neonicotinoids are a class of neuro-active insecticides chemically related to nicotine. They are used for seed dressing or sprayed directly on the plant. Extensive studies of the European Authority for Food Safety Authority and a recently published Greenpeace study shows that a small dose means acute poisoning to bees, leading to flight and navigation problems, fertility issues and inefficient and reduced foraging—making colonies more prone to illness or parasites.

Bees are crucial for our survival. At least one-third of global food production depends on pollination by bees and other insects. In addition to parasites, diseases, climate change and a decline in natural habitats from industrial agricultural practices—the use of pesticides is responsible for the devastating decline of bee populations worldwide.

Countries across Europe have already begun implementing the prohibition against bee-killing pesticides. In France, Germany, Slovenia and Italy, these toxins have been partially banned for years and have seen evidence of recovering bee populations without yield loss. While the European Commission is apparently willing to adopt far-reaching restrictions despite massive resistance from the industry, the Swiss government remains passive as Agriculture Minister Johann Schneider-Ammann appears to be intimidated by threats from Syngenta.

"Syngenta must stop spreading untruths. Syngenta responds to profit instead of to the protection of bees," said Marianne Künzle, agricultural expert at Greenpeace Switzerland. "The dramatic death of wild bees and honey bees is a symptom of misguided industrial agriculture, which serves mainly the interests of powerful corporations like Syngenta. It must stop now. As the agriculture minister, Schneider-Ammann is required to address this issue. Protect our bees and agriculture—Prohibit bee killing pesticides!"

In February, Greenpeace Switzerland was joined by beekeepers from all over in Bern, Switzerland, and presented a petition of 80,000 signatures to protect the bees.