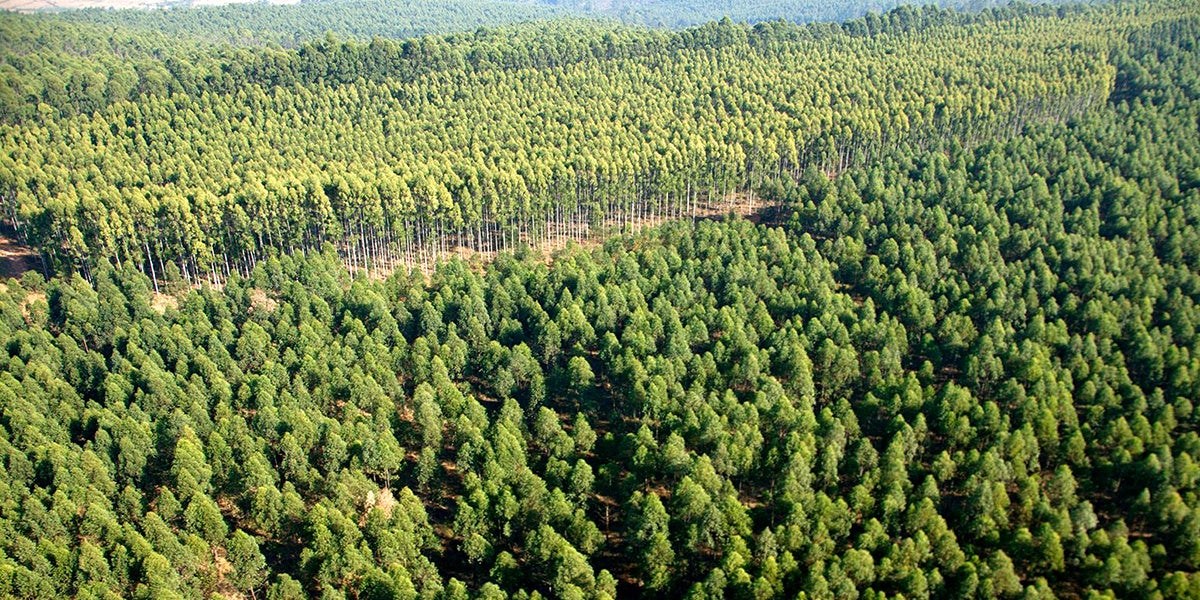 Reducing the impacts of human-caused climate change through the use of bioenergy with carbon capture and storage—better known as BECCS—could have major consequences for wildlife, forests and water resources, a new study shows.

The large-scale conversion of existing land to BECCS plantations could cause global forest cover to fall by as much as 10 percent and biodiversity “intactness” to decline by up to 7 percent, the lead author told Carbon Brief.

And the introduction of solar geoengineering could also threaten wildlife, a second study shows. The new research finds that implementing—and then not sustaining—such a technology could cause global temperatures to rebound rapidly, leaving many species unable to cope with the sharp change in conditions.

The two studies reiterate the need to fully consider the possible consequences of implementing geoengineering technologies if they are used to lessen the effects of global warming, the authors of both studies tell Carbon Brief.

The findings also highlight “the solution to global warming is mitigation,” one author concludes. “In order to achieve climate goals, it is now essential to immediately reduce CO2 emissions, instead of using harmful technologies to compensate for a more leisurely pace,” another author said.

BECCS has been labelled by many as a promising “negative emissions technology,” meaning it could be used to reduce the amount of CO2 in the atmosphere. Put simply, BECCS involves burning biomass—such as trees and crops—to generate energy and then capturing the resulting CO2 emissions before they are released into the air.

Though yet to be demonstrated on a commercial basis, large-scale BECCS is already included by scientists in many of the modeled “pathways” showing how global warming can be limited to 2C above pre-industrial levels.

Some scientists hope that BECCS could be used to soak up some of the CO2 that is released by human activity, which could, in turn, help the world to achieve “net zero” emissions.

The new study explores whether this could be achieved without causing too much damage to many aspects of the natural world.

BECCS could cause problems for the natural world by taking up a large amount of land, water and other resources, explained lead author Dr. Vera Heck, from the Potsdam Institute for Climate Impacts Research (PIK).

Her research finds that using BECCS on a wide scale could come with “large risks” for the natural world. She told Carbon Brief:

“Using large-scale biomass plantations to extract CO2 from the atmosphere might contribute to climate protection, but can lead to transgressing many other environmental limits, implying large risks for biodiversity, nutrient and water cycles and land use. Therefore, biomass as a means of CO2 removal can only be a limited contribution to sustainable climate mitigation pathways.”

Pushed to the Limit

For the study, the researchers estimated how BECCS could impact the nine “planetary boundaries.”

The idea of planetary boundaries is to identify how much humans can develop and use the Earth’s resources while staying safely within limits of what the planet can take. Four out of the nine planetary boundaries, including climate change, have already been breached as a result of human activity.

You can see the nine boundaries in the graphic below, which also shows the status of each one, according to a 2015 Science study. 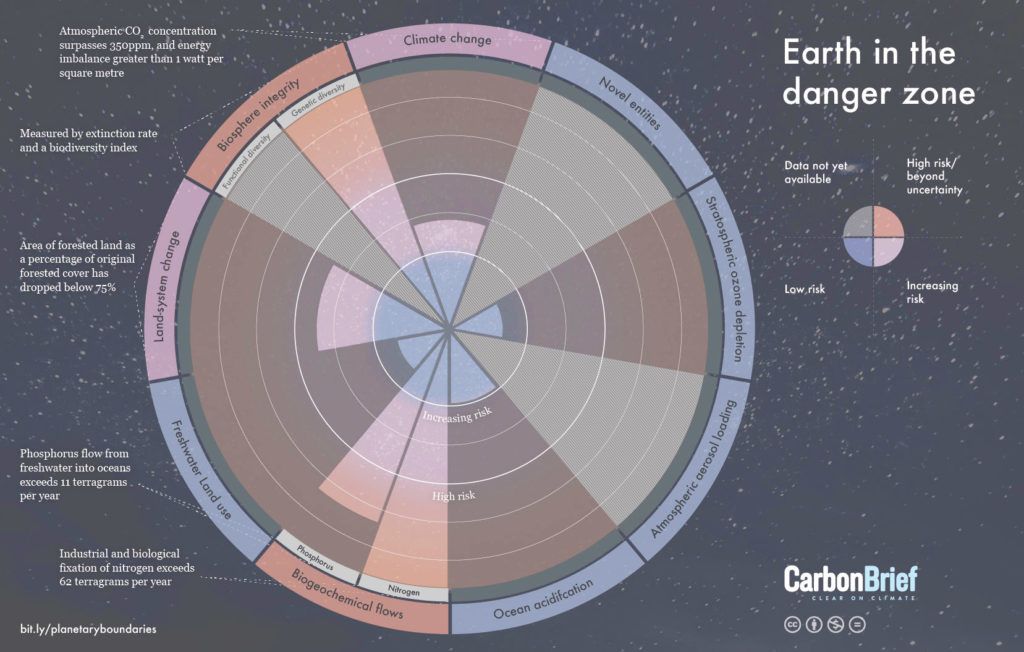 To understand how BECCS may affect the planetary boundaries, the researchers ran a series of models that considered both future climate change and how agricultural land use patterns may differ in the future.

They find that implementing BECCS within safe boundaries could allow for negative emissions of up to 60m tonnes of carbon a year. This corresponds to less than 1 percent of current global CO2 emissions, Heck said.

The researchers also estimated how much carbon could be captured if BECCS was implemented within “risky” boundaries. This definition allowed further damage to the planetary boundaries, while still preventing a move into the “high risk” zone (see earlier graphic).

This would allow for negative emissions of around 1.2bn to 6.3bn tonnes of carbon, depending on the type of bioenergy that is used, the researchers found.

However, implementing BECCS within risky boundaries could have major consequences for the environment, she added:

“The risky scenarios imply substantial risk of triggering negative Earth system feedback and might undermine the stability and resilience of the Earth system.”

Among impacts, the introduction of BECCS within risky limits could cause global forest cover to fall by 10 percent and biodiversity “intactness” to fall by 7 percent. This is because a large amount of land would need to be converted to biofuel plantations, Heck said.

On top of this, the additional water demand derived from all of the newly created BECCS plantations could be more than double that required by global agriculture, Heck added.

The new research confirms earlier findings that BECCS may have a “significant adverse impact on land and freshwater,” said Prof. Pete Smith, chair in plant and soil science at the University of Aberdeen, who was not involved in the research. He told Carbon Brief:

“The authors find that relying on widespread BECCS is risky, but there are regions where the risk is low. This study is robust and helps to move the currently debate away from the currently polarized positions of ‘BECCS is always bad’ or ‘BECCS is always good’. More integrated assessments such as these are required to bolster the evidence base upon which decisions on negative emissions will be taken.”

The second study, published in Nature Ecology & Evolution, explores how the introduction of solar geoengineering could affect biodiversity.

Solar geoengineering or “solar radiation management” (SRM), describes an array of methods—all of which remain hypothetical—for artificially reducing sunlight at the Earth’s surface in order to dampen global warming.

The new study focuses on the impacts of one type of SRM, which involves injecting aerosols into the stratosphere. Once in the atmosphere, it has been suggested that the aerosols could form a protective veil around the Earth that is able to reflect sunlight and, therefore, cool the planet.

Aerosols have a limited lifetime in the stratosphere and would need to be released at regular time intervals in order to be effective. If the release of aerosols were suddenly stopped, global temperatures could rapidly rise again.

The new study finds that this sudden termination of SRM would leave many species unable to cope with the rapid change in environmental conditions, said study author Prof. Alan Robock of Rutgers University. He told Carbon Brief:

“The main findings are that any implementation of stratospheric geoengineering could end catastrophically for many species. Although if geoengineering were ever done, it would not make sense to abruptly end it, there are credible scenarios where this might happen. Should society ever take that risk?”

To understand how the rapid termination of solar generation could affect wildlife, the researchers used models to compare changes in temperature and rainfall under a scenario in which SRM runs from 2020 until 2070 to a scenario with no geoengineering and an intermediate level of greenhouse gas emissions (RCP4.5).

The researchers then calculated the “climate velocities” of each scenario, which quantifies the speed and direction of shifting climates.

The results are shown on the charts below, which show the change in temperature velocity for (a) a modelled scenario showing the introduction of SRM, (b) the termination of SRM, (c) the current climate between 1960 and 2014 and (d) an unengineered world with moderate emissions.

In the chart, deep red signifies a rapid increase in the rate of temperature rise, while blue shows rapidly decreasing temperature.

The results show that while the implementation of solar geoengineering could cause temperatures to fall fairly quickly, sudden termination could cause rapid increases as temperatures rebound.

The rate of change in temperature under the termination of SRM could be two to four times larger than those caused by climate change itself, the researchers conclude. The study also finds similar—though not as drastic—changes on rainfall.

This large change in environmental conditions could leave many species unable to adapt and at a high risk of extinction, the researchers say.

Animals that do not find it easy to adapt to new environments, such as species found in tropical rainforests and small island habitats, will be the least able to adapt to these changes, they add. The risk could be highest for slow-moving amphibians, the researchers note in their paper:

“While differences in climate velocity between terrestrial hotspots for some taxa [animal groups] are small, that amphibian biodiversity hotspots have the highest temperature velocities from sudden termination suggests that increased extinction risks would be especially severe for this group.”

In other words, a large number of amphibians are found in areas that are expected to be most affected by a sudden SRM termination.

The new research makes an important contribution to the “broader conversation” surrounding the risks of solar geoengineering, said Dr. Ben Kravitz, a climate scientist from the Pacific Northwest National Laboratory, who was not involved in the new research. He told Carbon Brief:

“Although there are many issues that arise when one talks about ecosystems, to the best of my knowledge, this study the first quantitative look at what might happen to biodiversity under different scenarios of geoengineering. And, importantly, the study was done using multiple climate models, meaning we have estimates of how robust the model responses are.”

“This paper is precisely the kind of research we need to help us better understand the risks and potential benefits of stratospheric aerosol injection [SAI]. For this reason, part of the initial governance frameworks addressing SAI has to cover research, including encouraging more research that results in clarifying the risks and potential benefits of SAI.”

The findings show that dampening global warming through the use of solar engineering could come with “many possible risks,” said Robock. This suggests that cutting global emissions would be the best way of limiting future climate change, he said:

“The solution to global warming is mitigation. It is not too late to rapidly switch to wind and solar power and rapidly reduce our emissions of CO2 to the atmosphere.”

Mitigating climate change through the use of BECCS also comes with “substantial” risks, said Heck:

“It would be risky to rely on BECCS as a strategy to achieve the Paris Agreement. Notable negative emissions from biomass plantations come at the expense of enormous pressures on the global environment as a whole.

“In order to achieve climate goals, it is now essential to immediately reduce CO2 emissions, instead of using harmful technologies to compensate for a more leisurely pace.”