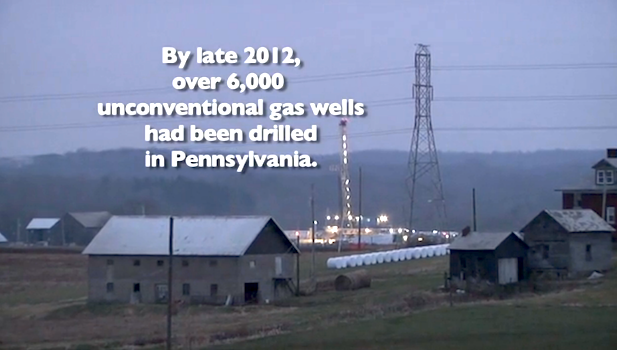 The shale gas drilling boom has changed the lives of many Pennsylvanians. Two-thirds of Pennsylvania sits on top of Marcellus Shale, one of the world’s largest shale gas deposits. While some other states and countries are taking their time to figure out how to proceed with shale gas drilling, Pennsylvania has welcomed the gas industry and allowed it to move ahead at a rapid speed.

By featuring stories from Pennsylvania residents, including a cattle farmer who lost stock due to gas drilling, grain farmer who leased her land for drilling six years ago, company that is recycling frack wastewater and cancer-survivor-fractivist who helps people who have been negatively impacted by drilling, this documentary goes beyond the polarized fracking debate and humanizes the issue.

An independent filmmaker and journalist, Kirsi Jansa has been witnessing the many impacts of the shale gas drilling boom in Pennsylvania since early 2011. This 16-minute documentary, Life above Marcellus Shale 2011-2012, provides multiple perspectives of shale gas drilling. It is based on the first ten episodes of her short documentary series, Gas Rush Stories.