Gardening the Seas to Save the World’s Corals 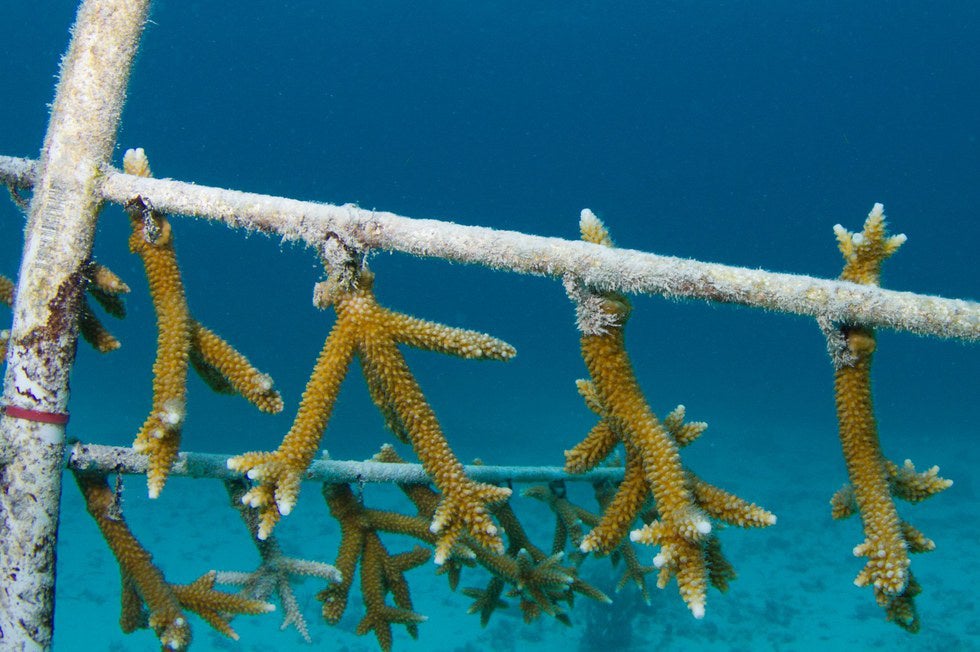 As ocean waters warm and acidify, corals across the globe are disappearing. Desperate to prevent the demise of these vital ecosystems, researchers have developed ways to “garden” corals, buying the oceans some much-needed time. University of Miami Rosenstiel School marine biologist Diego Lirman sat down with Josh Chamot of Nexus Media to describe the process and explain what’s at stake. This interview has been edited for length and clarity.

What is killing coral?

I wish we had an easy, straightforward answer for what’s killing corals. We know there are many, many different factors influencing coral abundance, diversity, distribution and health these days, but I think the specific answer varies based on where you are.

Temperatures play a major role at global scales, and then you have all of these other, more local factors like disease, physical impacts of storms, or ship groundings. 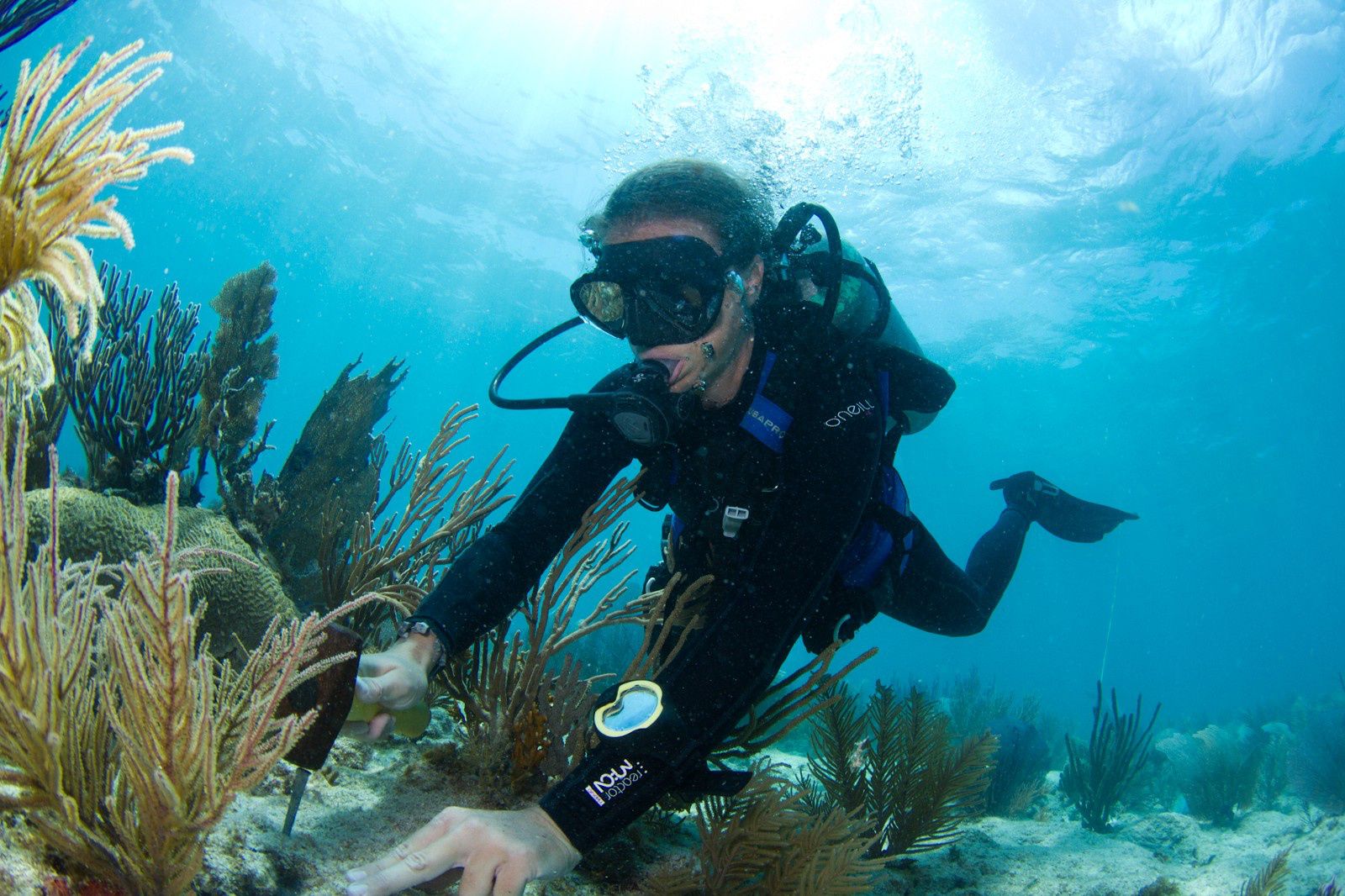 We had the dredging of the Port of Miami channel a couple of years ago and that caused a lot of localized mortality due to sediment burial and sediment stress. You also have land-based sources of pollution that can damage by location and nutrient influence that causes algal overgrowth of corals.

Local factors are superimposed on regional factors directly related to global climate change. Changes in temperature, more temperature extremes, acidification of the water, changes in storm frequency and sea level rise— all are at different scales — but they all combine to cause coral mortality.

Factors vary both spatially and temporally, but the outcomes are all the same. Regardless of where you are, we’ve lost a tremendous amount of coral. 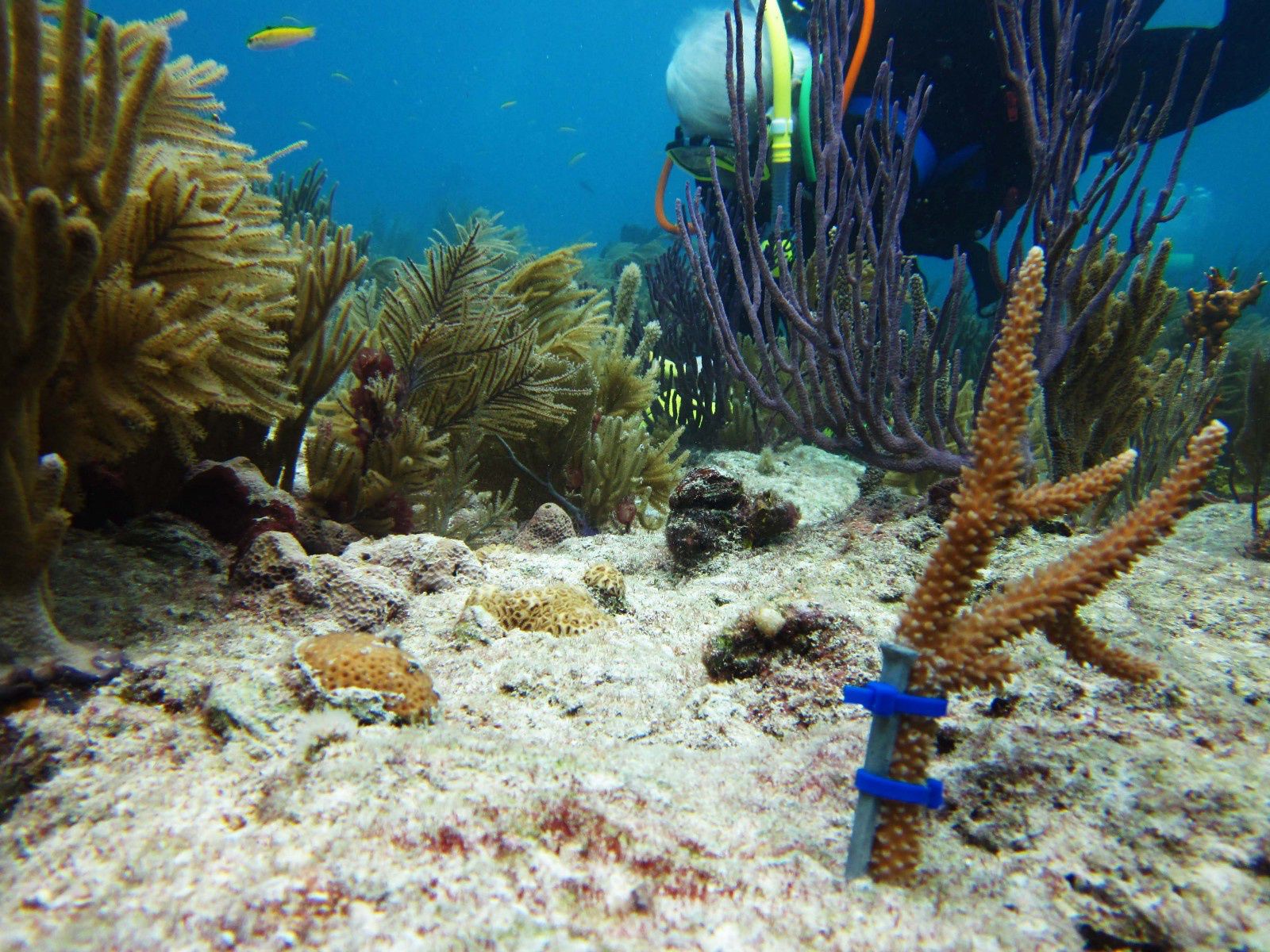 Nursery-raised Staghorn coral out-planted onto a reef by a citizen scientist.

In the face of all those threats, can restoration work?

Historically, restoration was developed and used for acute disturbances. A ship runs aground, and so then there’s a recovery, and funds are allocated to recovering the reef structure at a given location, and then corals are planted on top of that. But as global conditions decline for coral reefs, there’s now a need to scale up. So, we’re not just dealing with the localized impact—we’re looking at species declining throughout their range.

We need other tools at larger scales, and that’s where coral reef gardening has come into play, because it works at larger scales compared to just dumping cement and rebuilding reef structures, costly endeavors that recover just a very small footprint. We’re growing and planting these organisms.

Do you worry about planted coral dominating the reefs?

Initially, these techniques were developed for fast-growing corals. The genus that we’re focusing on, Acropora, is threatened, so these are very important reef-building species.

When abundant, they monopolize shallow environments. They form thickets, extensive areas of high-density colonies. That’s the way they used to grow, until about three to four decades ago when they got wiped out by disease and other factors. The branching corals that we’re working with grow between 10 and 15 cm per branch per year, so that’s very fast growth.

Through recent advances in coral aquaculture, we’re now also able to grow massive species, the ones that grow very slowly. Mote Marine Lab has developed microfragmentation techniques where they can cut coral colonies very, very small and make them grow very, very fast. Although we focused on branching corals initially, now most of the programs, especially here in Florida, are expanding onto other threatened species. 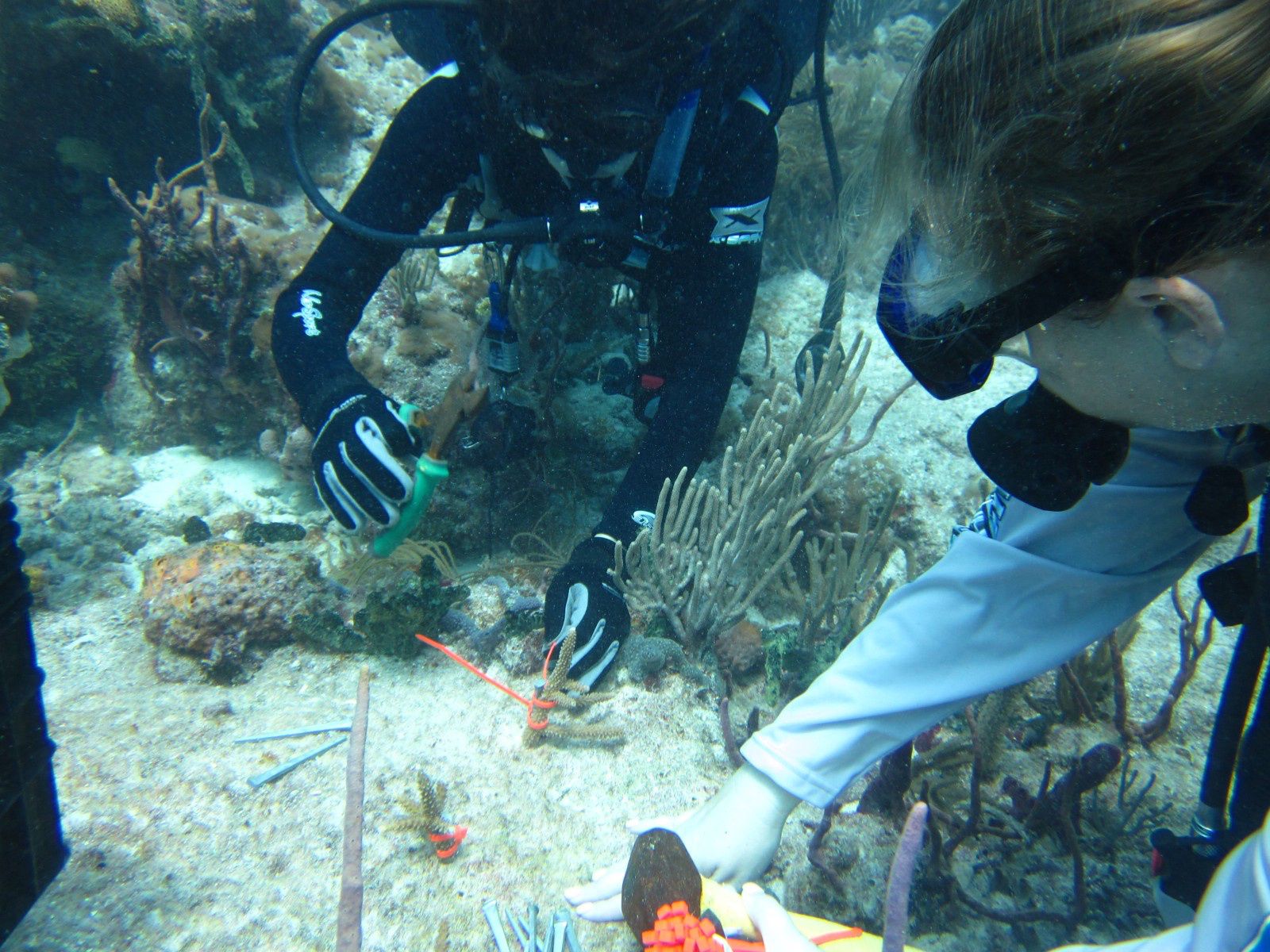 Can these efforts solve the problem, or are they a placeholder until climate stabilizes?

You hit the nail on the head. One of the early criticisms of reef restoration was the scale issue and spending a lot of resources working on a very small footprint.

The other major criticism is that, even though we’re planting a lot of corals, we’re planting them onto environments where the same stressors that caused their initial mortality are in place. Now there is ocean acidification and increased temperatures, so things have gotten, in some cases, progressively worse. 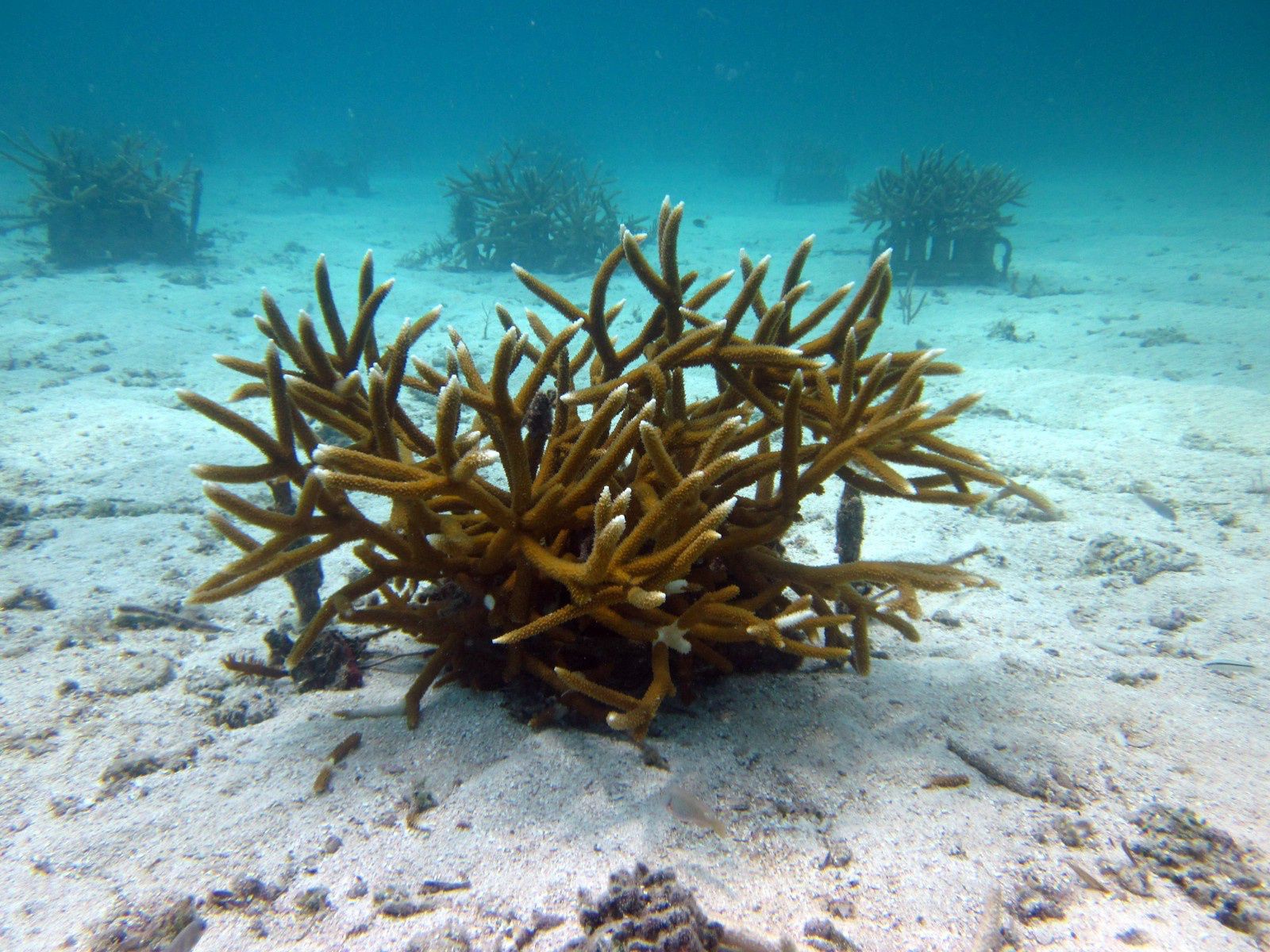 Staghorn corals create a sustainable source of corals for use in restoration. Rescue-A-Reef, UM Rosenstiel School of Marine and Atmospheric Science

That is a valid concern if we were just planting corals, but we’re not just doing that. We’re still concentrating on all of the other aspects of reef restoration, setting up marine protected areas to protect fish stocks and coral impacts, working to curb land-based sources of pollution, and setting up sedimentation and nutrient controls. And then, on a much larger scale, we’re all trying to curb carbon emissions, trying to limit the greenhouse impacts and acidification impacts. All these tools just help us buy time.

We’re also doing a lot of genomics work to see how corals can increase their resilience. A colleague of mine here at the Rosenstiel School at University of Miami, Andrew Baker, is stress-hardening corals. He works on coral symbiosis, and he found that by applying a little bit of non-lethal stress, he can make corals shuffle their Zooxanthellae, which are the endosymbiotic microalgae that provide energy to the corals. In that process, they’re able to uptake Zooxanthellae that are more thermally tolerant. So, through the forced shuffling of symbionts, you may be able to buy these corals one or two degrees of tolerance, so that they become more tolerant to bleaching in future years. That is cutting-edge science.

We’re trying to actually find out what makes corals survive, and trying to beef up their defenses and their resilience over time. And that’s because we have access to all these coral genotypes through the active propagation from coral gardening.