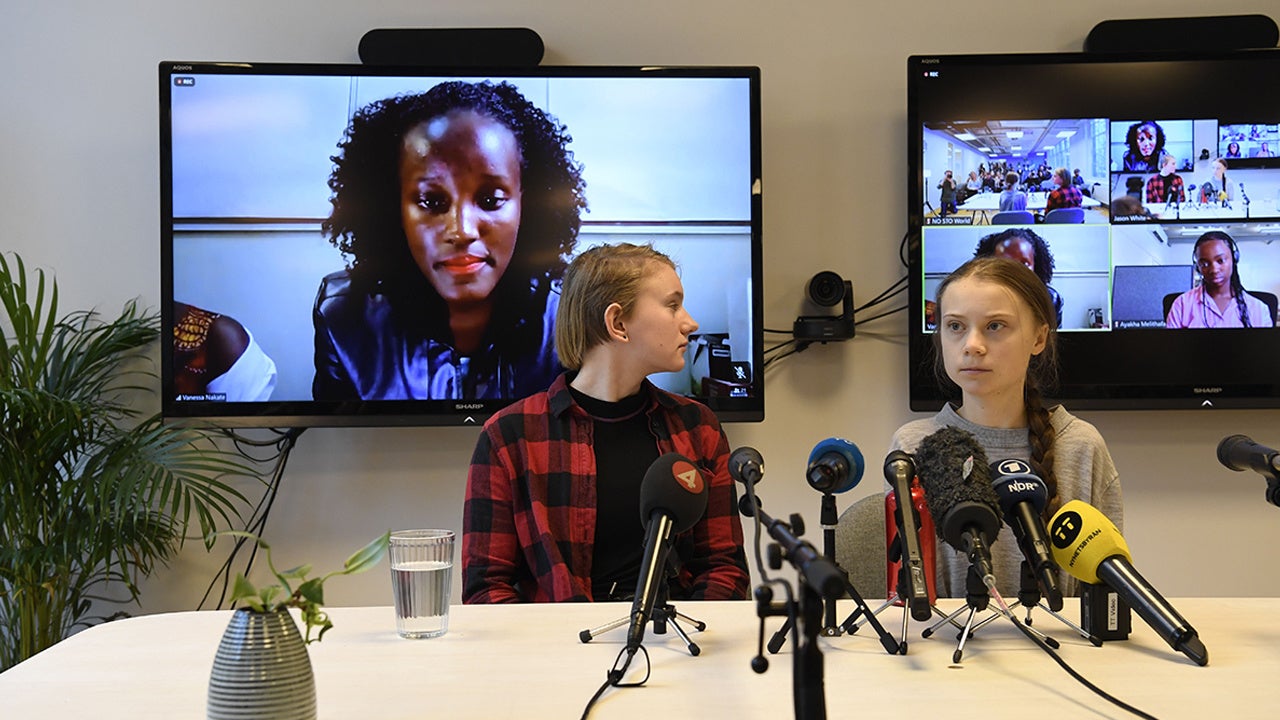 Swedish climate activists Greta Thunberg (R) and Ell Ottosson Jarl sit in front of a screen displaying Vanessa Nakate from the Fridays For Future movement in Uganda as they give a press conference during a meeting with climate activists and experts from Africa focusing on key environmental threatening of the continent, on Jan. 31 in Stockholm. PONTUS LUNDAHL / TT News Agency / AFP / Getty Images

The Fridays for Future movement held a press conference Friday focused on the need for the world to better recognize the amazing climate activism taking place in Africa — a continent that is already enduring severe impacts of global heating in spite of its limited contributions to creating the crisis.

Climate activists and experts joined the event via video, including Vanessa Nakate of Fridays for Future Uganda, who was cropped out of an Associated Press photo with four white school strikers while attending the World Economic Forum’s summit in Davos, Switzerland last week. The incident put a spotlight on the erasure of Africans in conversations and reporting about the climate emergency.

Joining Nakate for the live-streamed conference were movement founder Greta Thunberg of Sweden; Fridays for Future activists Ell Ottosson Jarl of Sweden, Makenna Muigai of Kenya, and Ayakha Melithafa of South Africa; and Ndoni Mcunu, a climate scientist at the Global Change Institute at University of the Witwatersrand in South Africa.

In a Facebook post about the press conference, Fridays for Future International said that following the photo incident, which the AP called a “terrible mistake” and apologized for, “The media must report fairly and justly on the climate crisis throughout the world.”

Not only do journalists and news outlets often lack African voices in climate coverage, they also fail to report on how global heating is impacting the continent. A new CARE International analysis that Common Dreams reported on this week found that nine of the 10 most under-reported humanitarian crises in the world last year were in Africa, and many of those crises were climate-related.

Nakate, according to BuzzFeed, now sees the photo incident at Davos as an opportunity to make climate discussions, including in the media, more inclusive:

“After the picture and everything that happened, I received quite a number of messages and support from different parts of the world,” she said.
“It’s been my encouragement, motivation, and source of energy to move on—to keep demanding for climate action, and keep doing the climate strikes and everything that we’ve been doing for climate activism.
“I believe that after this incident and all that’s happened, there’s going to be a change in how the media reports the issues of climate change,” Nakate said. “I believe that the media will start to cover stories from different parts of the world, because I believe that each country has an activist, and every activist has a story to tell, a solution to give.”

Thunberg, who was in the photo at Davos and expressed support for Nakate after she was excluded from it, said Friday that “the African perspective is always so under-reported” and with the press conference, she hoped to use her platform to direct some focus to activists on the continent.

“I’m not the reason why we’re here,” she said. The 17-year-old Swede acknowledged that her climate activism often garners global headlines, while the actions of others in the movement — particularly those from the global south — don’t receive the same level of attention. As Thunberg put it: “We are fighting for the exact same cause.”

Nakate said during the press conference that “African activists are doing so much … and it gets so frustrating when no one really cares about them.”

“Every individual is needed in the fight against the climate crisis,” added the 23-year-old. “Because climate change is not specific about the kinds of people it affects. It affects everyone, so it’s up to all of us to rise up and speak up, because when we do, we’ll be able to get the change and the action that we need.”

With a nod to the massive youth-led movement that saw millions of people take to the streets to demand ambitious climate policies over the past year, she declared: “If 2019 was the year of creating awareness, then let’s make 2020 the year of action.”

Muigai, who is from Nairobi, pointed out that “Africa at large is being affected by the negative impacts of climate change … A great example of the impacts of this is the locust infestation in East Africa, which will soon lead to food insecurity.”

As Common Dreams reported this week, the United Nations’ Food and Agriculture Organization recently warned that the locust swarms pose “an unprecedented threat to food security and livelihoods in the Horn of Africa.”

The region’s worst locust outbreak in decades is partly fueled by the climate crisis. Muigai said that due to lack of quality education, some people in less developed countries don’t fully understand climate issues.

The African continent, Muigai noted, is also dealing with issues like deforestation and bad energy policies that contribute to global heating. She said that “all of us, at the end of the day, will be affected by climate change.”

Melithafa explained that in South Africa, where severe drought has hit crops and water supplies, people are living though climate impacts each day. Highlighting how wealth inequality factors into climate issues, Melithafa said that as the rich dig private wells, poorer residents “already struggling to make ends meet, just to get a decent meal at the end of the day,” also have to buy drinking water.

Mcunu, the climate scientist, pointed to the difficulties of responding to extreme weather events, scarcity of food and clean water, and electricity demands as key issues the continent is grappling with related to the climate crisis.

“How is it that we are not being spotlighted in stories or being told in these stories?” Mcunu said. “That’s the main challenge we have as a continent.”

“It is said that Africa only contributes to approximately 5% of the [global greenhouse gas] emissions, yet we are the most impacted,” she added. She noted efforts to raise awareness worldwide about African knowledge and adaption initiatives as well as the necessity of working with scientists on the continent to gather accurate data.

Mcunu emphasized the importance of international cooperation to not only adapt to the impacts of climate change but also prevent further global heating, particularly by decarbonizing economies.