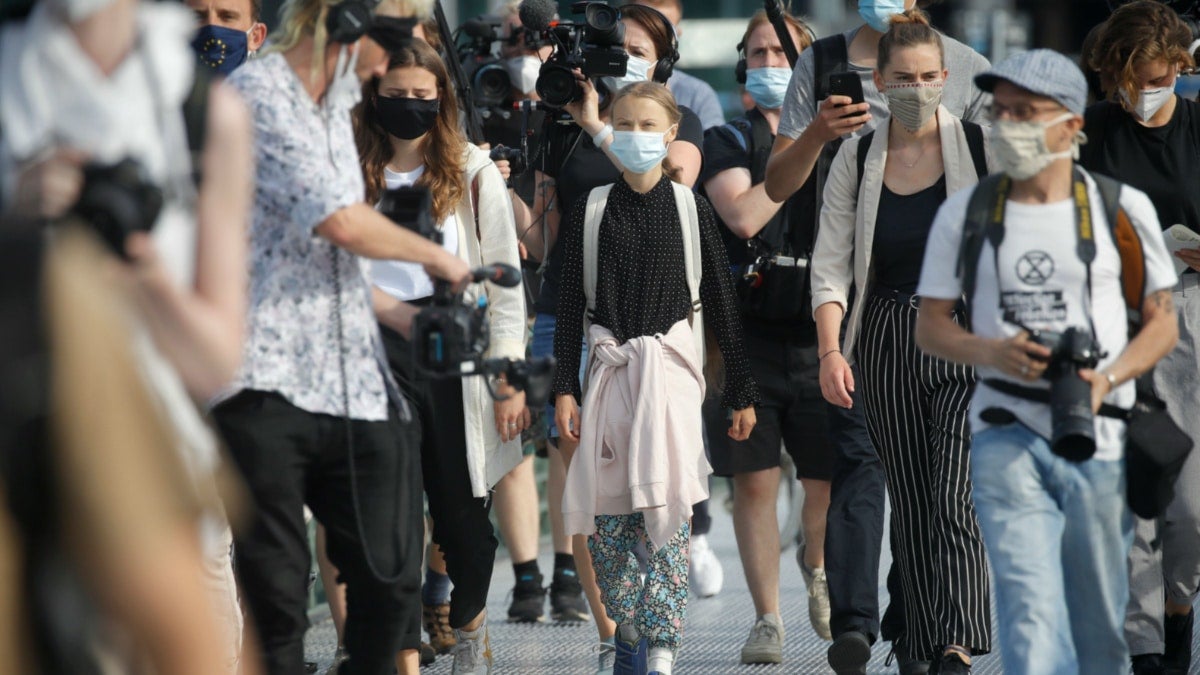 Swedish founder of Fridays for Future movement Greta Thunberg wears a face mask as she walks to the Chancellery to meet with German Chancellor Angela Merkel on August 20, 2020. Odd Andersen / AFP / Getty Images

Swedish climate leader Greta Thunberg donned a mask and joined a socially distanced Fridays for Future protest in Berlin just a day after she and three other youth activists met with German Chancellor Angela Merkel, whose government took over the European Council presidency in July, to discuss the planetary emergency.

Thunberg—along with Luisa Neubauer of Germany and Anuna de Wever van der Heyden and Adélaïde Charlier, both of Belgium—met with Merkel on Thursday exactly two years after the first school strike for the climate took place, which the four activists noted in an op-ed for the Guardian Wednesday that detailed their plans to share with her an open letter from July, now signed by over 125,000 people, calling on European Union and global leaders to #FaceTheClimateEmergency.

About 100 activists reiterated that demand with their Friday demonstration in the German capital. Tweeting about the meeting with the chancellor, Fridays for Future Berlin wrote that “conversations must be followed by deeds—that’s why we take to the streets together!”

After the 90-minute meeting with Merkel, Thunberg told reporters that “we want leaders to step up, take responsibility, and treat the climate crisis like a crisis.”

The Swedish teenager added that the Fridays for Future activists want world leaders “to dare to step out of their comfort zones, to prioritize the future ahead of us now, and to be brave enough to think long-term.”

Citing a German government statement issued after the meeting, Politico reported that “the group discussed the climate priorities of the German E.U. Council presidency, the E.U.’s objective of becoming climate-neutral by 2050, and efforts to hike the bloc’s 2030 emissions reduction targets.”

The government spokesman said Merkel and the activists agreed that global warming posed a challenge for the world and that industrialized countries had a special responsibility to tackle it.

“The basis for this is the consistent implementation of the Paris Climate Agreement,” the spokesman said.

The German government admitted earlier this week that it would have missed its climate target for 2020 if the economic havoc wrought by the coronavirus pandemic had not caused a large drop in greenhouse gas emissions.

Neubauer told journalists that Merkel “at least confirmed that she is willing to get stuff done during the [E.U.] presidency… Yet eventually, at the end of the day, it’s about common budgets, it’s about very clear targets, it’s about numbers and figures and that we need action, more than really nice and big words.”

“It became very clear that we look at the situation from different perspectives,” Neubauer said of the climate crisis after the meeting. “As a physicist, [Merkel] does understand the science. As a politician, she well understands the political complexity behind that struggle. The question is now how to fill that gap.”

The German activist added that “the interests of future generations have to be somehow balanced with interests of generations today—and that’s a huge challenge and we’re not denying that at all.”

During the Corona crisis, the #FridaysForFuture demonstrations could not take place. Now #climate activists, including @GretaThunberg, met with Angela #Merkel directly to discuss the #ClimateCrisis and the goals of the #Paris agreement. #Environment #FaceTheClimateEmergency pic.twitter.com/no9hNz3EL6

Neubauer also shared that Fridays for Future is mobilizing another worldwide strike next month, while acknowledging challenges posed by the pandemic.

“We used to strike in masses on the streets which was for many weeks not thinkable during corona and is still a very challenging task,” she noted. “We’re listening to the science and we are adjusting. We’re moving to spaces where we can strike safely—sometimes digitally, sometimes in smaller numbers on the streets.”

“We have decided to strike again globally and safely, if possible on the streets… we’re mobilizing right now for September 25,” Neubauer said. “The climate crisis hasn’t slowed, it’s escalating. We need people to demand action and this is obviously what we keep doing.”

The calls for urgent action in Berlin on Friday were echoed by other school strikers across the globe. Some participated in the weekly Fridays for Future protest digitally due to the ongoing coronavirus pandemic, while others wore masks and took additional safety precautions like the strikers in Germany.

School has started again and we are back at the #ClimateStrike in front of the Swedish Parliament again! The strike has been going for two years and we will continue until we get some #ClimateJustice !!!#FridaysForFuture pic.twitter.com/XYwS1oHR5e

“This is week 80 of my #schoolstrike4climate but are you listening?” tweeted Leah Namugerwa, a 16-year-old in Uganda. “Whether you do or not I’ll continue doing what is right for my and future generations.”