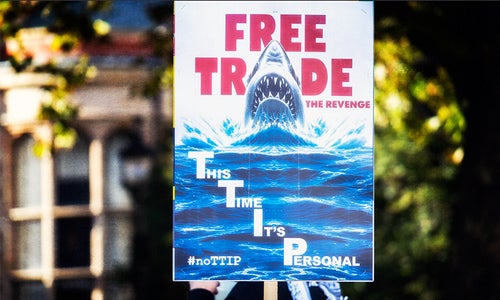 Warning against dangers to “workers, communities and our environment,” more than 450 environmental advocacy groups called on Congress to reject the controversial Trans-Pacific Partnership (TPP) and Trade and Investment Partnership (TTIP).

Specifically warning against the Investor-State Dispute Settlement (ISDS) provisions, which allow multinational corporations sue nations in private, clandestine tribunals for passing laws they don’t like, the groups sent a letter Monday that stated: “We strongly urge you to stand up for healthy communities, clean air and water, Indigenous peoples, property rights and a stable climate by committing to vote no on the TPP and asking the U.S. Trade Representative to remove from TTIP any provision that empowers corporations to challenge government policies in extrajudicial tribunals.” 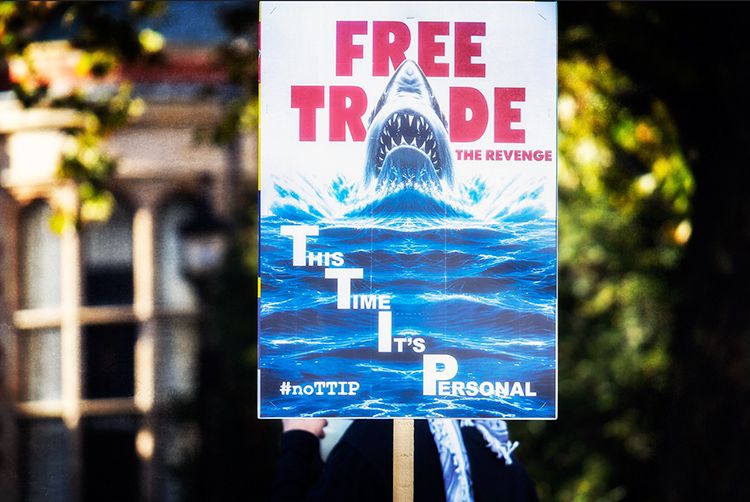 “By empowering many more firms to launch ISDS cases against the U.S.,” environmental groups wrote, “the TPP and TTIP would pose a major threat to efforts across the country to restrict fossil fuel activities.” Photo credit: Garry Knight / Flickr

The letter was signed by organizations both large and national and small and local, ranging from the Sierra Club, Food & Water Watch and 350.org to groups such as Bold Nebraska, Catskill Citizens for Safe Energy and Kauaians for a Bright Energy Future, among many others.

“The TPP would let foreign oil and gas companies undermine the will of hundreds of communities that have worked tirelessly to protect themselves from the environmental and public health hazards associated with fracking,” Food & Water Watch Executive Director Wenonah Hauter said. “These trade deals give the worst climate scofflaws new and powerful weapons to wield against the broad-based grassroots movement to stop fracking and fight for a clean energy future.”

Pointing out the precedent set by TransCanada’s $15 billion lawsuit against the U.S. for its rejection of the Keystone XL tar sands pipeline, the groups detailed the stark dangers the ISDS provision poses to the environmental movement.

“By empowering many more firms to launch ISDS cases against the U.S.,” the letter continued, “the TPP and TTIP would pose a major threat to efforts across the country to restrict fossil fuel activities,” including:

The letter was also signed by several Indigenous groups, including Idle No More San Francisco Bay, Indigenous Environmental Network and the Alaska Inter-Tribal Council and drew particular attention to the threats such trade agreements pose to Indigenous rights and traditional territories:

Much of the world’s remaining fossil fuel reserves are on or adjacent to Indigenous lands and territories. Unfortunately, the nation-states engaged in the TPP and TTIP agreements have not strongly defended Indigenous land rights and Indigenous peoples’ right to free, prior and informed consent. Ultimately, such trade deals grant more rights to transnational corporations, often at the expense of Indigenous rights, undermining special protections of Indigenous lands and cultural resources. For Indigenous peoples wanting a just economic transition away from oil and gas development, these deals pose severe risks to their sovereignty and ability to self-determine their futures as nations and tribal citizens concerned about the climate, health and environmental impacts from fossil fuels.

Rising opposition to so-called “free trade” agreements has fueled voters this election cycle and presidential hopeful Bernie Sanders has made his vocal opposition to the TPP and other deals like it a cornerstone of his campaign:

The TPP is a continuation of our disastrous trade policies that have devastated manufacturing cities and towns all over this country.

“There is so much momentum now to end the TPP and other trade agreements,” as Sierra Club trade program president Ilana Solomon told Reuters. “This is an area where there is bipartisan agreement … that these deals harm workers, communities and our environment.”

President Obama is hoping to have the TPP ratified before he leaves office on Jan. 20, 2017 and Reuters reports that Congress is expected to vote on it after the election in November.