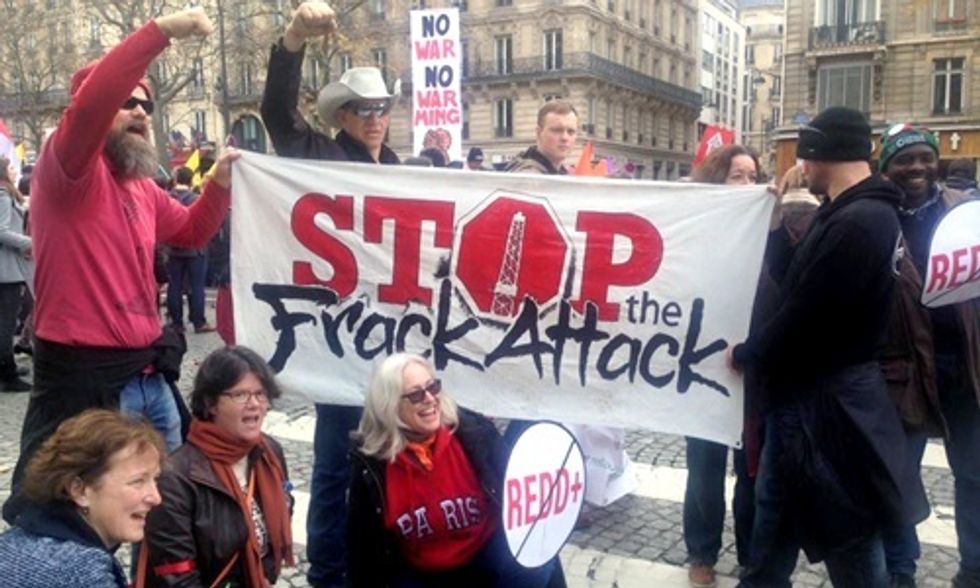 The newly-minted Paris climate agreement calls for limiting global temperature increase to 2°C, and leaves in the preamble the more aspirational goal shared by many countries of 1.5°C. It’s clear to observers around the world that meeting this goal is going to require steep cuts in greenhouse gas emissions and leaving most of the world’s remaining fossil fuels in the ground.

This target is particularly important for anti-fracking activists. Those on the frontlines of the oil and gas industry’s “shale boom” expansion know all too well that there is a lot of pollution coming off of those wells, compressor stations, pipelines, etc. They can’t avoid it. It’s in their homes. It’s giving them nosebleeds, asthma, rashes and a host of other health problems.

Although volatile organic compounds like benzene (a carcinogen) are directly harming residents’ health, they are toxic hitchhikers on methane, which which comprises the vast majority of oil and gas air pollution. Methane, another name for “natural gas”, is also a potent greenhouse gas, 86 times worse for the climate than carbon dioxide over 20 years—the timeframe in which world leaders just agreed we need to peak in global emissions.

Carbon dioxide sticks around in the atmosphere much longer than methane—over 100 years, methane is “only” 34 times worse for the climate. But in 100 years, unless we stop methane pollution by taking a global energy u-turn, we will be living on the equivalent for another planet.

Because methane is so potent in the short term, our stinky little asthma-inducing bad neighbor has emerged as the top priority for preventing climate chaos. If we reduce carbon dioxide today, from burning coal, oil and natural gas, then we begin reducing global warming impacts in 40 years. If we reduce methane now, we reduce global warming now.