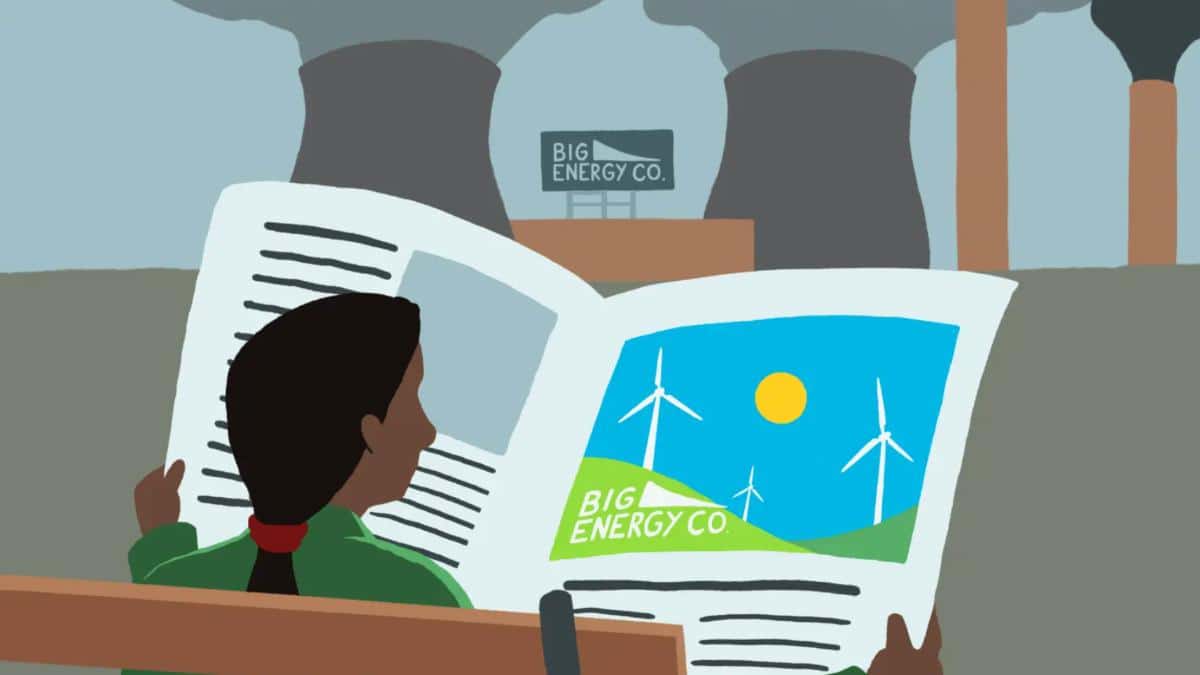 By Rich Collett-White and Rachel Sherrington

Fossil fuel companies could face legal challenges over their misleading advertising, after a DeSmog investigation uncovered the extent of their “greenwashing.”

Environmental lawyers ClientEarth have put companies on notice with the publication of the Greenwashing Files. The analyses, which use DeSmog’s research, show how adverts of major fossil fuel companies and energy producers continue to overemphasize their green credentials, giving the public a misleading impression of their businesses.

DeSmog analyzed the advertising output of Aramco, Chevron, Drax, Equinor, ExxonMobil, Ineos, RWE, Shell and Total, and compared this with the reality of the companies’ current and future business activities.

DeSmog’s investigation found messaging that touts companies’ climate pledges without being transparent about their large emissions contributions is widespread across advertising campaigns and social media promotions.

The adverts regularly highlight the companies’ preferred solutions to climate change — from carbon capture and storage, to experimental algae biofuels, and investment in renewable energy sources — without being open about the small percentage of overall investment allocated to these technologies, nor their various limitations.

The Greenwashing Files lay bare the contrast between the public image these adverts create, and the reality of the fossil fuel companies’ activities.

All companies featured in this article were contacted for comment.

“We’re working on ways to provide energy while addressing the risks of climate change, producing clean-burning natural gas to reduce emissions from power plants, capturing CO2 before it reaches the atmosphere, and exploring unexpected energy sources like biofuels made from algae,” a reassuring voice tells us in Exxon’s “Powering Progress” advert – one of several released in recent years that present the US oil giant as a leader in green technologies.

But while the ad shows Exxon scientists hard at work developing “algae farms” and technology designed to suck carbon dioxide from the air, its business activities tell a different story.

Exxon is increasingly an outlier among fossil fuel companies and other major emitters, having refused to set an absolute emissions reduction target, opting instead for gradual “carbon intensity” reductions which still allow for overall emissions to increase. It has no plans to cut oil and gas production, which energy analysts say is urgently needed to meet the goals of the Paris Agreement.

While Exxon remains responsible for a significant portion of global emissions – with documents in 2019 revealing a total annual output roughly equivalent to that of Canada – its spending on clean energies has been a tiny fraction of its investments, with just 0.2 percent of its investment in new projects going to low carbon sources between 2010 and 2018.

And while “Powering Progress” and other ads put Exxon’s investments in algae biofuels at the fore, it has spent just $300 million on the technology in a decade, compared with yearly capital investment of around $20 billion. Experts doubt whether the technology will ever be commercially viable or usable at scale.

A video by German energy giant RWE takes the viewer through landmark inventions that have spurred on human civilisation since the industrial revolution – the light bulb, the radio, mass transport – before arriving at the present day. “Every time has its energy,” the ad tells us, adding that “times are changing. Society is changing. Companies are changing, and we are changing too.”

The images cut to wind turbines, and the forces of nature that are powering what we are told is today’s “renewable age.” The company positions itself at the heart of this transition, telling the viewer it is “focusing on renewable energies and storage, for a sustainable world,” and that it is providing “clean, reliable and affordable” energy as part of its transition to “the new RWE.”

The campaign accompanies pledges to become “carbon neutral” by 2040 and oversee a significant expansion into wind and solar energy.

But the growth of RWE’s low-carbon activities has not been matched by an exit from fossil fuels. RWE remains the largest emitter in Europe, according to a recent study by Greenpeace, and its three major lignite coal-fired power stations all feature in the EU’s top five highest-emitting plants. Under current plans, it will continue to generate coal-fired electricity until the end of 2038, almost a decade after the deadline recommended for OECD countries by climate experts, at the same time as expanding its already significant fossil gas business.

Despite its claims to focus on clean energy, 80 percent of the company’s energy still comes from non-renewable sources, mostly highly-polluting brown coal, hard coal and gas. The company also counts controversial and carbon-intensive biomass amongst its “renewable” energy sources despite warnings from scientists over its use.

Drax, another energy company that now relies heavily on biomass and operates the UK’s largest power station in North Yorkshire, has worked hard to bolster its green credentials in recent years, positioning itself as an ally in the fight against climate change.

Last year, it released an advert celebrating the company’s shift away from coal-fired energy production, which it completed in March. Set to an uplifting soundtrack, the video calls the move a “major step towards Drax’s ambition to become carbon negative by 2030,” while touting a new “Zero Carbon Skills Taskforce” to ensure the surrounding area “isn’t defined by its past, but by its future.”

But the company’s claims about the climate-friendliness of biomass, which has now taken over from coal as the principal source of energy at its power station thanks to generous government subsidies, have been widely disputed. Burning wood pellets has been found to be more carbon-intensive than fossil fuels in most circumstances, while experts doubt that trees planted in their place can re-absorb the carbon dioxide emitted, on a meaningful timescale.

Carbon capture and storage – another key plank of Drax’s low-carbon strategy – remains uneconomical at scale, with the company’s own use of the technology still in the pilot phase.

In response to questions from DeSmog, Drax said emissions from biomass energy are “already accounted for in the land-use sector and therefore considered carbon neutral at the point of combustion,” in line with “established global best practice” set out by the UN IPCC.

It also said biomass should be considered renewable “because the forests we source from are growing and storing more carbon” and pointed to its plans for a bioenergy with carbon capture and storage (BECCS) unit by 2027, “creating tens of thousands of jobs” and “permanently removing millions of tonnes of carbon dioxide from the atmosphere each year.”

Aramco – ‘The Moment is Now’

The Saudi Arabian state-owned oil and gas giant, Aramco, became the most valuable listed company in history when it floated on the stock market at the end of 2019. But the fossil fuel behemoth is at pains to assure viewers it is concerned about more than just its bottom line.

In an advert titled “The Moment is Now,” an Aramco employee tells a lecture theatre full of colleagues that “as we open up to the world, we know more than ever before that we must continue towards a sustainable future.”

“We value the natural resources we discover but never forget it is our human energy that drives us to create a better world,” she says to the audience, who reward her presentation with a standing ovation.

Elsewhere, the company insists it is driven by a “commitment to preserving the environment because protecting our planet is one of our most important values.”

That’s despite the company being the world’s largest corporate greenhouse gas emitter, responsible for an estimated four percent of all global emissions since 1965.

Aramco’s oil and gas reserves total more than those of ExxonMobil, Chevron, Shell, BP and Total combined, while the company refuses to disclose its full emissions. Its majority shareholder, the Saudi Arabian government, has been at the forefront of efforts to stall international action on climate change for decades. At the last UN climate talks in Madrid, over a third of Saudi Arabia’s representatives were associated with the oil and gas industry, many with Aramco.

Equinor – ‘This is what changed us.’

Previously trading under the name Statoil, the Norwegian state-owned oil and gas company Equinor rebranded in 2018, with the hope of highlighting its transformation into a “broad energy company” and its growing low-carbon energy division.

Equinor explained its reasons for the name change in an advert called “Equinor. This is what changed us.” Scenes of raging storms and melting ice caps are displayed while the narrator says: “Some changes are so profound that they transcend everything. Changes that require us to find a new balance.”

In a more recent ad, the company insists that “emissions must come down and it must happen fast.”

Equinor is certainly taking steps to increase its investments in low-carbon technologies, with plans to up its renewable energy capacity to 4-6 gigawatts by 2026, and has set a “net zero” emissions target for 2050.

But this shift is largely in addition to, rather than in place of, its core oil and gas business. The company is still exploring for more oil and gas reserves and does not intend to start reducing its fossil fuel production before 2030. Last year, it opened the largest oil field in Western Europe and is heavily involved in ventures in the Arctic.

Equinor promotes natural gas as the “perfect fuel to balance renewable energy” and was given a warning two years ago by the UK’s Advertising Standards Authority for claiming the fuel was a “low-carbon” energy source.

Another technology the company touts is carbon capture and storage (CCS), but all of the projects it is involved in currently amount to less than three percent of its overall emissions.

ClientEarth lawyer Johnny White said the collection of adverts showed the fossil fuel companies were involved in a “great deception.”

“We need to reduce reliance on fossil fuels. But instead of leading a low-carbon transition, these companies are putting out advertising which distracts the public and launders their image,” he said.

“These adverts are misrepresenting the true nature of companies’ businesses, of their contribution to climate change, and of their transition plans,” he added, saying that “we cannot underestimate the real world impact this advertising has on the pace of change.”

You can find the full set of adverts and analyses here.

Disclaimer: ClientEarth lawyer Sophie Marjanac sits on the board of DeSmog UK Ltd.