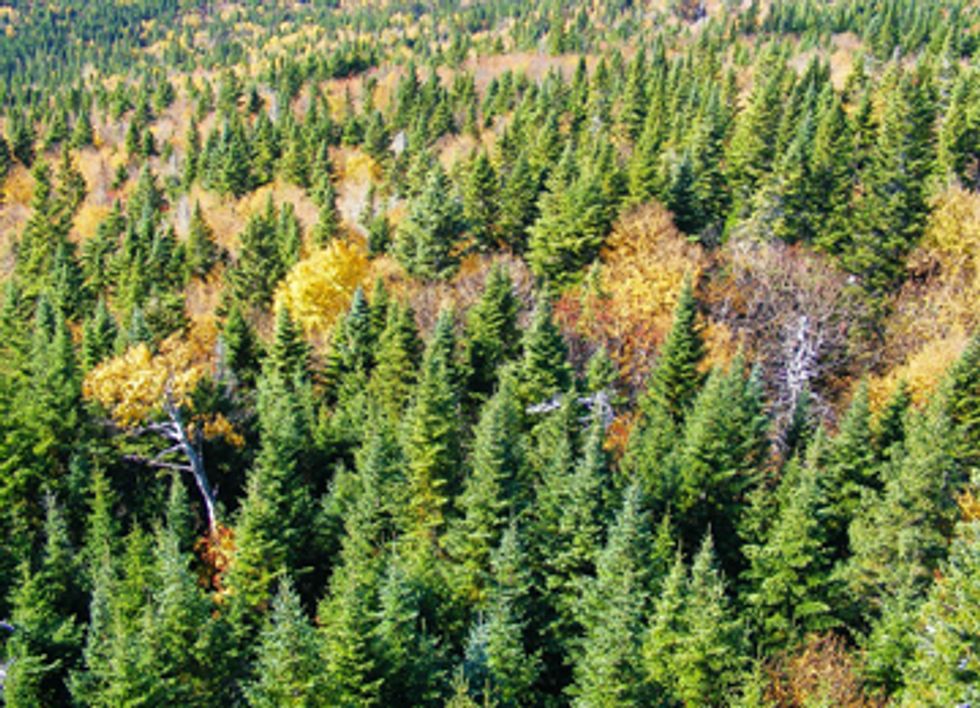 Trees may be getting more efficient in the way they manage water. They could be exploiting the higher levels of carbon dioxide in the atmosphere, growing foliage from a lower uptake of groundwater. If so, then the carbon dioxide fertilization effect—predicted by theorists and observed in laboratory experiments—could be real.

Some forests, as they soak up carbon dioxide, are using water more efficiently.

This is a provisional finding, because it is pretty difficult to measure the precise economy of a whole forest or an open wilderness.

But Trevor Keenan—of Macquarie University in Australia and Harvard University in the U.S.—and colleagues report in Nature that they used an indirect measure, called the eddy-covariance technique, to monitor the way managed forests handle two important gases: carbon dioxide and water vapor.

Carbon dioxide levels in the atmosphere were once 280 parts per million; they are now 400 ppm and still rising. For more than 20 years, rigs have towered above the world’s forests recording eddy-covariance, measuring carbon uptake and water-use over areas of a square kilometer.

Keenan and his fellow-researchers looked at the data from 21 temperate and boreal forests in the northern hemisphere and found a remarkably consistent trend: As the years rolled by, and carbon dioxide levels rose, forests used water more efficiently and this was true for all 21 sites.

This so-called fertilization effect has been independently confirmed in arid zones, again by indirect research, through the work of an Australian team studying satellite data, and also seems consistent with a finding reported in Nature Climate Change that tropical forest trees are now producing more flowers, even though the observed temperature rises in the tropics have so far only been modest.

The implication of the most recent research from the boreal and temperate forests is that plants could be partially closing their stomata to keep their carbon levels at a constant level. This finding, like much in science, raises as many questions as it answers. How plants “know” what to do in such circumstances, and how they do it, is still a mystery.

Plants exploit atmospheric carbon dioxide so it should be no surprise that a better supply leads to more efficient growth. But more carbon dioxide also means higher temperatures, more evaporation, more precipitation and more cloud cover—so it has been difficult to observe the impact.

Whether this will turn out in the long run to be a positive feedback that could, to some slight extent, slow global warming is uncertain.

Plants are also sensitive to extreme heat and drought, two other unwelcome companions of climate change due to human emissions of greenhouse gases such as carbon dioxide, so it is too soon to suggest that forests will emerge as the winners.

Other scientists still have to confirm the effect, and measure its scale more accurately. But the latest research does suggest trees are responding to change.

“Our analysis suggests that rising atmospheric carbon dioxide is having a direct and unexpectedly strong influence on ecosystem processes and biosphere-atmosphere interactions in temperate and boreal forests,” says one of the authors, Dave Hollinger of the U.S. Forest Service.