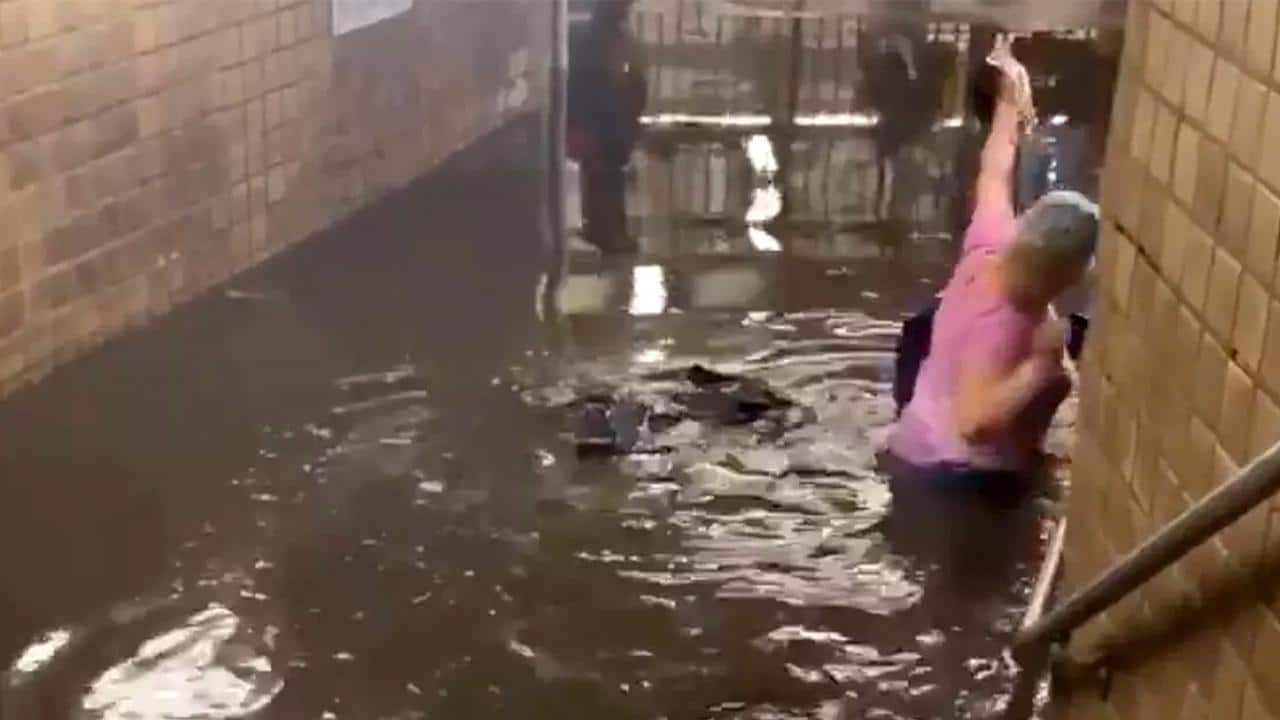 A New Yorker attempts to wade through a flooded subway station in Manhattan on July 8, 2021. @PaulleeWR / Twitter Screengrab

Footage of New Yorkers struggling to wade through filthy, waist-deep water at a Manhattan subway station as heavy rainfall engulfed the city’s aging and long-neglected infrastructure on Thursday added fuel to progressive demands for a robust federal spending package that confronts the climate crisis — which is making such extreme weather more frequent and destructive.

“It’s been raining for two hours and our infrastructure is flooding and overwhelmed,” tweeted Rep. Jamaal Bowman (D-N.Y.). “Our infrastructure package must address the climate change crisis with the urgency it deserves — with massive investments in decarbonization and clean energy.”

“The impacts of climate change are already here,” Bowman added. “It is urgent that our infrastructure package makes significant investments to prepare for and mitigate future emergency weather events.”

One New Yorker who witnessed the scene at Manhattan’s 157th Street Station told Gothamist that “people were pacing back and forth deliberating whether they were going to brave the waters or not.” The person described the water as “real disgusting.”

Some subway system ya got there. This is the 157th St. 1 line right now. @NYCMayor @BilldeBlasio pic.twitter.com/xyfTAUPPNu

Other videos posted to social media on Thursday showed cars nearly halfway submerged in water as commuters attempted to navigate through the storm. One person was seen driving a jet ski on a badly flooded street.

“A ‘bipartisan’ infrastructure bill isn’t big enough to stop climate change,” said Rep. Mondaire Jones (D-N.Y.), referring to a 9 billion White House-endorsed package that includes hardly any climate funding — an omission progressives are attempting to remedy with a separate multitrillion-dollar bill that will move through the budget reconciliation process.

When there’s a flood in NYC, you know the Bronx was prepared to bring the jet skis out 😂😂😂 pic.twitter.com/X8kgvh1G4b

The fierce rainfall and heavy winds came as Tropical Storm Elsa made its way up the East Coast of the U.S., sparking tornadoes in Georgia and North Carolina and prompting warnings of additional flooding in the Northeast on Friday.

“Flash flood watches were in effect for parts of New York, New Jersey, and Connecticut until noon on Friday, as Elsa was expected to deliver heavy rain across the area,” the New York Times reported. “Transit officials, already girding for Elsa’s arrival, said they had crews out across the city addressing the flooding problems as quickly as possible and warned against entering stations that might still be inundated.”

The tropical storm hammered the Eastern U.S. as the Pacific Northwest grapples with a heatwave that experts have characterized as “the most extreme in world weather records.” The historic temperatures, which reached as high as 121°F in British Columbia, killed hundreds of people — and more than a billion intertidal animals — in the U.S. and Canada.

On Wednesday, officials in Multnomah County, Oregon deemed the devastating heatwave a “mass casualty event” as the death toll in the state rose to 107.

A rapid-response analysis published earlier this week by a group of more than two dozen scientists found that the heatwave “would have been virtually impossible” in the absence of the human-caused climate crisis, and warned that such extreme events will become increasingly common without a major reduction in greenhouse gas emissions.

“Firenados in northern California. Ocean fires in the Gulf of Mexico. Subway waterfalls in New York City. A heat dome in the Northwest melting power cables, killing hundreds, and frying marine animals,” Sen. Bernie Sanders (I-Vt.), chair of the Senate Budget Committee, tweeted Friday. “I have been told that combating climate change is expensive. Compared to what?”