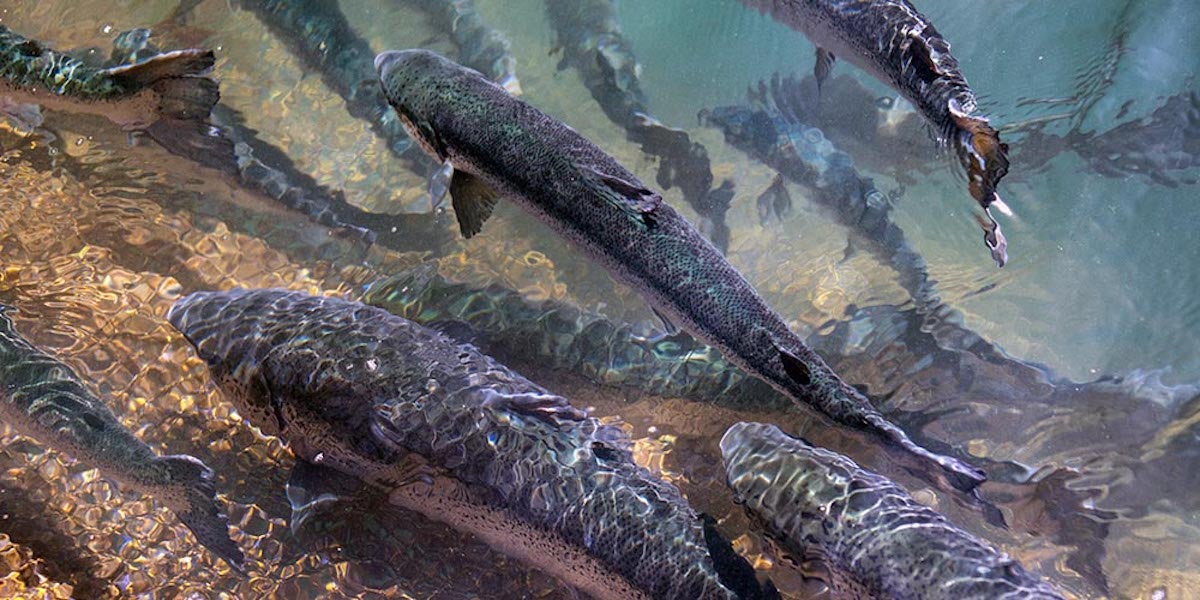 Thousands of Atlantic salmon escaped from a damaged net pen at a Cooke Aquaculture fish farm off Cypress Island in Washington’s Puget Sound on Saturday, sparking fears from some that the
farm-raised fish could threaten wild Pacific salmon.

Washington Department of Fish and Wildlife (WDFW) said that 305,000 salmon were in the net pen at the time, but the company estimates that 4,000-5,000 fish escaped.

Canada-based Cooke Aquaculture blamed the incident on high tides caused in the days leading up to and during Monday’s solar eclipse.

“Exceptionally high tides and currents coinciding with this week’s solar eclipse caused damage to a salmon farm that has been in operation near Cypress Island for approximately 30 years,” the company said.

WDFW is monitoring the situation and crafting a fish spill-response plan with Cooke.

But why are Atlantic fish being farmed in the Pacific anyway? Well, as Inverse reported, Atlantic salmon net pens are banned in every West Coast state except for Washington.

“It’s really a shame that this has happened,” Jonathan White, the author of Tides: The Science and Spirit of the Ocean, commented to Inverse. “It underscores the risk and the dangers of farm fishing.”

Environmental groups have long criticized the practice of aquaculture. According to Food & Watch Watch, “massive amounts of antibiotics, hormones, and pesticides are required to keep disease at bay just to keep fish and shrimp alive in overcrowded conditions (typically in nets, cages, or ponds).”

“Salmon farms are extremely harmful to wild fish because they break natural laws, releasing dangerous levels of viruses, bacteria and sea lice into the water,” the Sea Shepherd Conservation Society warns on its Operation Virus Hunter campaign website. “Wild salmon are declining wherever there are salmon farms.”

The Guardian reported in April that the sea louse, or salmon louse, is eating into farmed Atlantic salmon supplies in Scotland, Norway, Iceland and Canada, driving salmon prices higher and creating a “chemical arms race in the seas.” Salmon companies around the world are spending an estimated $1.25 billion a year combined to tackle such outbreaks.

“It’s a devastation,” fisherwoman Ellie Kinley told the The Seattle Times. “We don’t want those fish preying on our baby salmon. And we don’t want them getting up in the rivers.”

Meanwhile, WDFW is encouraging anglers to fish for the escaped salmon, which are said to be 8 to 10 pounds in weight and are considered safe to eat.

“Our first concern, of course, is to protect native fish species,” said Ron Warren, head of WDFW’s Fish Program. “So we’d like to see as many of these escaped fish caught as possible.”

NOAA researcher Michael Rust told the Seattle Times that the risk of farmed Atlantic salmon passing diseases is low and they have been unsuccessful in interbreeding with Northwest native species.

Rust said the farmed fish are more likely to be prey than predators: “These things are kind of couch potatoes. They are domesticated. Imagine a dairy cow getting lost out in the Serengeti. It doesn’t last very long.”