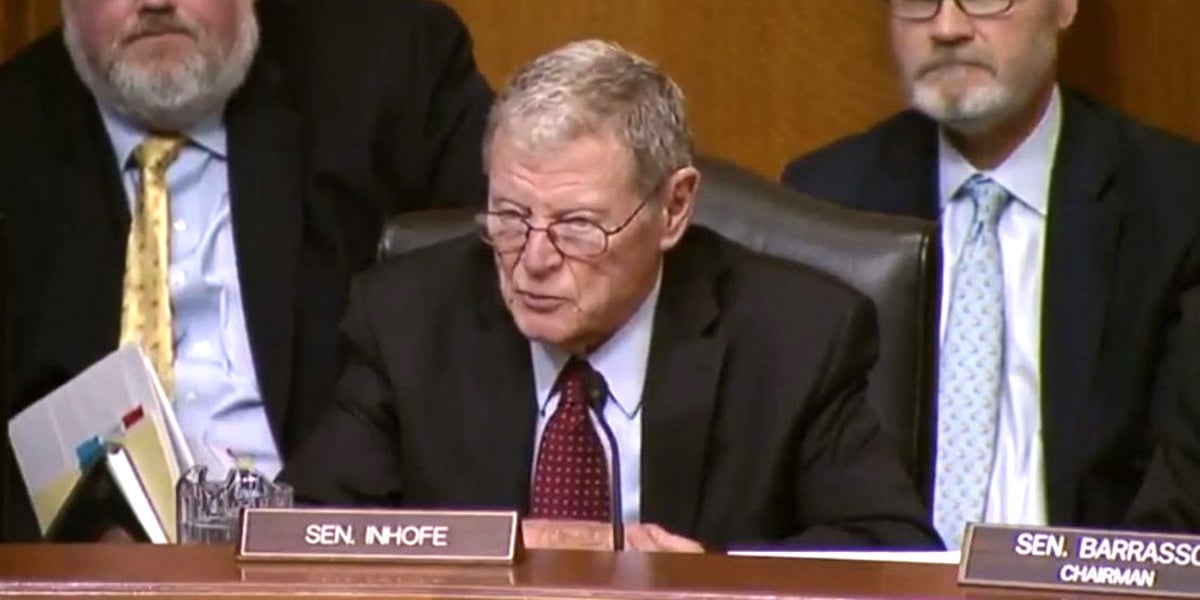 In a recent blog post, ExxonMobil executive Suzanne McCarron reiterated her company’s claim that it fully accepts the reality of climate change and that it wants to do something about it.

“I want to use this opportunity to be 100 percent clear about where we stand on climate change,” she wrote. “We believe the risk of climate change is real and we are committed to being part of the solution.”

So why is the company still a part of—in fact, a major part of—the problem?

An exchange between Oklahoma Sen. James Inhofe and U.S. Environmental Protection Agency (EPA) Administrator Scott Pruitt during a recent oversight hearing is a case in point, providing a window into how ExxonMobil’s undue influence continues to block climate action.

During the Jan. 30 hearing, which was held by the Senate Environment and Public Works (EPW) Committee, Sen. Cory Booker inadvertently provoked Inhofe by raising the issue of environmental justice. The New Jersey Democrat cited the threat climate change-induced flooding poses to three dozen Superfund sites in his state and asked Pruitt if he was “taking into account the environmental burdens disproportionately impacting communities of color, indigenous communities and low-income communities.”

Inhofe seized the opportunity to contradict Booker, claiming that minority and low-income communities are disproportionately harmed by environmental protections, specifically citing the Obama administration’s Clean Power Plan, which would have dramatically reduced carbon emissions from coal-fired power plants if Pruitt hadn’t repealed it.

Booker, Inhofe said, was implying that Pruitt was trying to “punish” vulnerable Americans. “I wanted to just remind you,” Inhofe told the committee, “that we had a guy I remember so well, Harry Alford. He was the president of the National Black Chamber of Commerce. He provided some of the most powerful testimony that I have ever heard when it comes to the effects of the Clean Power Plan and some of the other regulations … on black and Hispanic poverty, including job losses and increased energy costs.

“[Alford] was very emphatic as to who was paying the price on these,” the Oklahoma Republican continued, “and I think sometimes that the previous administration forgot that there are already people out there who are paying all they can pay just to try to eat and keep their house warm.”

Inhofe rested his argument on previous congressional testimony by Harry Alford, president of the National Black Chamber of Commerce (NBCC), a shoestring, mom-and-pop operation that is unapologetic about taking fossil fuel industry money. “Of course we do and it is only natural,” Alford wrote on NBCC’s website. “The legacy of Blacks in this nation has been tied to the miraculous history of fossil fuel…. [F]ossil fuels have been our economic friend.”

One of NBCC’s closest economic friends is ExxonMobil, which has donated more than $1.14 million to the group since 2001.

What did the company get for that money?

In 2015, NBCC commissioned a report that claimed the Clean Power Plan would “inflict severe and disproportionate economic burdens on poor families, especially minorities.”

In fact, unchecked climate change would more than likely hurt those communities most, and investments in energy efficiency under the plan would ultimately lower electricity bills across the country.

How did NBCC arrive at its upside-down assessment? The Union of Concerned Scientists took a close look at the report and found it was based on several flawed fossil fuel industry-friendly studies. Two of those bogus studies were produced by ExxonMobil grantees: the Heritage Foundation, which received $340,000 from ExxonMobil between 2007 and 2013, and the U.S. Chamber of Commerce, which received $3 million between 2014 and 2016.

The Chamber study, which came out just days before the EPA released a draft of the Clean Power Plan, was debunked not only by the EPA, but also by PolitiFact.com and The Washington Post. Among its many faults, the Chamber study—which was co-sponsored by the American Petroleum Institute—wildly inflated the cost of the plan and failed to consider the benefits of cutting carbon emissions.

ExxonMobil Spreads its Money Around

But there’s more than just the fact that ExxonMobil financed deliberately flawed studies to try to derail the Clean Power Plan. The company also is a major supporter of a number of Senate EPW Committee members, including Inhofe, who are adamant climate science deniers.

Inhofe has deep ties to the oil and gas industry, which has donated $1.85 million to his campaign war chest over his long career in Congress, more than twice than any other industry. Three oil and gas companies are among the senator’s top 10 corporate contributors: Koch Industries, Devon Energy and … ExxonMobil.

Six of the other 10 Republicans on the EPW Committee also are on ExxonMobil’s donation list, including Wyoming Sen. John Barrasso, the current committee chairman. Roughly half of the $119,500 ExxonMobil contributed to the seven senators over the last decade went to Barrasso and Inhofe, the committee’s previous chairman.

Then there’s ExxonMobil’s link to Pruitt, Oklahoma’s attorney general before President Trump tapped him to run the EPA. From 2012 through 2013, he chaired the Republican Attorneys General Association (RAGA) and afterward served on the organization’s executive committee. From 2014 through 2016, ExxonMobil gave RAGA $160,000 in three annual installments.

Just a few weeks after the company made its 2016 donation of $50,000, Pruitt and then-RAGA Chairman Luther Strange, at the time Alabama’s attorney general, co-authored a National Review column attacking a coalition of state attorneys general investigating ExxonMobil and other fossil fuel companies for misleading investors and the general public about climate change. Parroting ExxonMobil’s argument, Pruitt and Strange charged that the coalition was violating the company’s first amendment right to free speech.

“The debate” over climate change, they wrote “is far from settled. Scientists continue to disagree about the degree and extent of global warming and its connection to the actions of mankind. That debate should be encouraged—in classrooms, public forums and the halls of Congress. It should not be silenced with threats of prosecution. Dissent is not a crime.”

In this case, Inhofe’s counterfactual comment didn’t make it into the ensuing media coverage. Along with nearly everything else that was said during the two-and-a-half hour marathon, it was eclipsed by a bombshell dropped by Sen. Sheldon Whitehouse. The Rhode Island Democrat revealed that during a February 2016 radio interview, Pruitt said Trump would be “more abusive to the Constitution than Barack Obama, and that’s saying a lot.” Whitehouse read Pruitt’s remark aloud and asked him if he recalled making it.

“I guess not,” Whitehouse replied.

Not surprisingly, that embarrassing nugget was the story. There was no way that Inhofe’s rambling, ExxonMobil-sponsored falsehood could compete in the media with red meat like that. But overshadowed or not, Inhofe provided yet another incontrovertible piece of evidence that—despite ExxonMobil’s statements to the contrary—the company is still very much engaged behind the scenes in trying to stymie any government attempt to seriously address climate change.