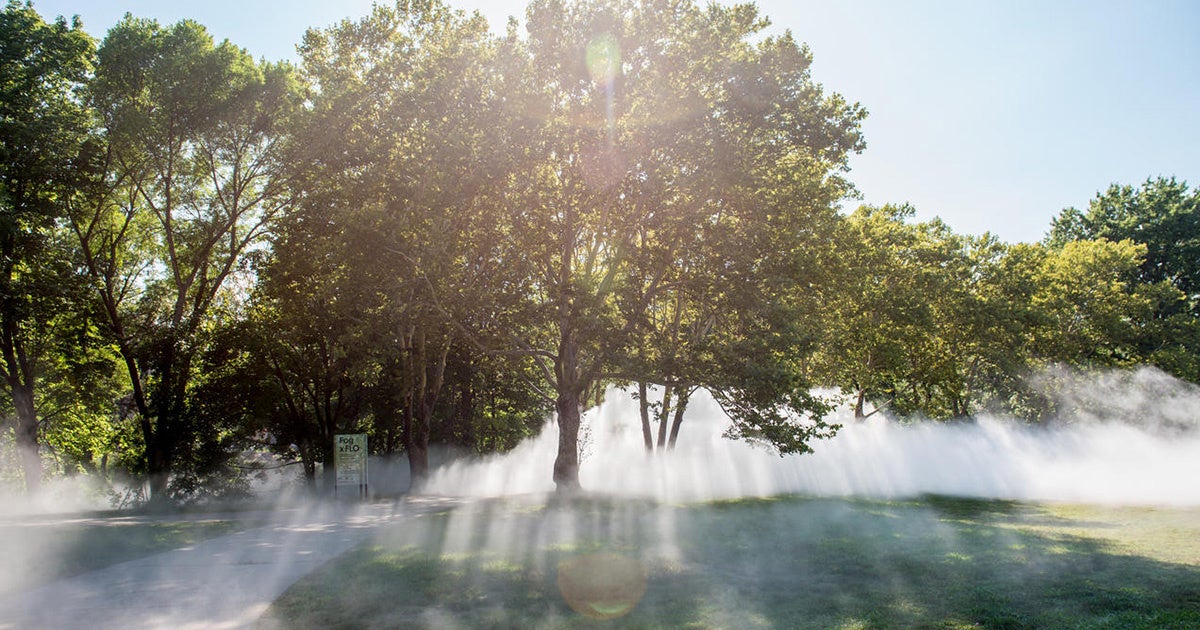 What do you call a sculpture that weighs nearly nothing, never looks the same twice, and vanishes into thin air? Artist Fujiko Nakaya has built a storied five-decade career out of the answer to this seeming riddle: a fog sculpture.

The Japanese artist has presented her atmospheric works more than 80 times across four continents. Now 85 years old, Nakaya is unveiling her most extensive exhibition yet: Fog x FLO: Fujiko Nakaya on the Emerald Necklace. For 12 weeks, through Oct. 31, her fog sculptures will be mist-ifying five of Boston’s parks: the Arnold Arboretum, the Fens, Franklin Park, Jamaica Pond and Olmsted Park. The free public installation is part of a 20th-anniversary celebration for the Emerald Necklace Conservancy, a nonprofit organization that stewards the 1,100-acre park system, which forms a seven-mile green chain (or emerald necklace) through the heart of the city.

Born in Sapporo in 1933, Nakaya came to the United States to earn an art degree from Northwestern University and later studied at the Sorbonne in Paris. The young artist didn’t just want to compose but to decompose. She started by painting clouds—formations so ephemeral that we make a game of perceiving recognizable shapes in them before they billow outwards, split apart, or disappear into the sky. 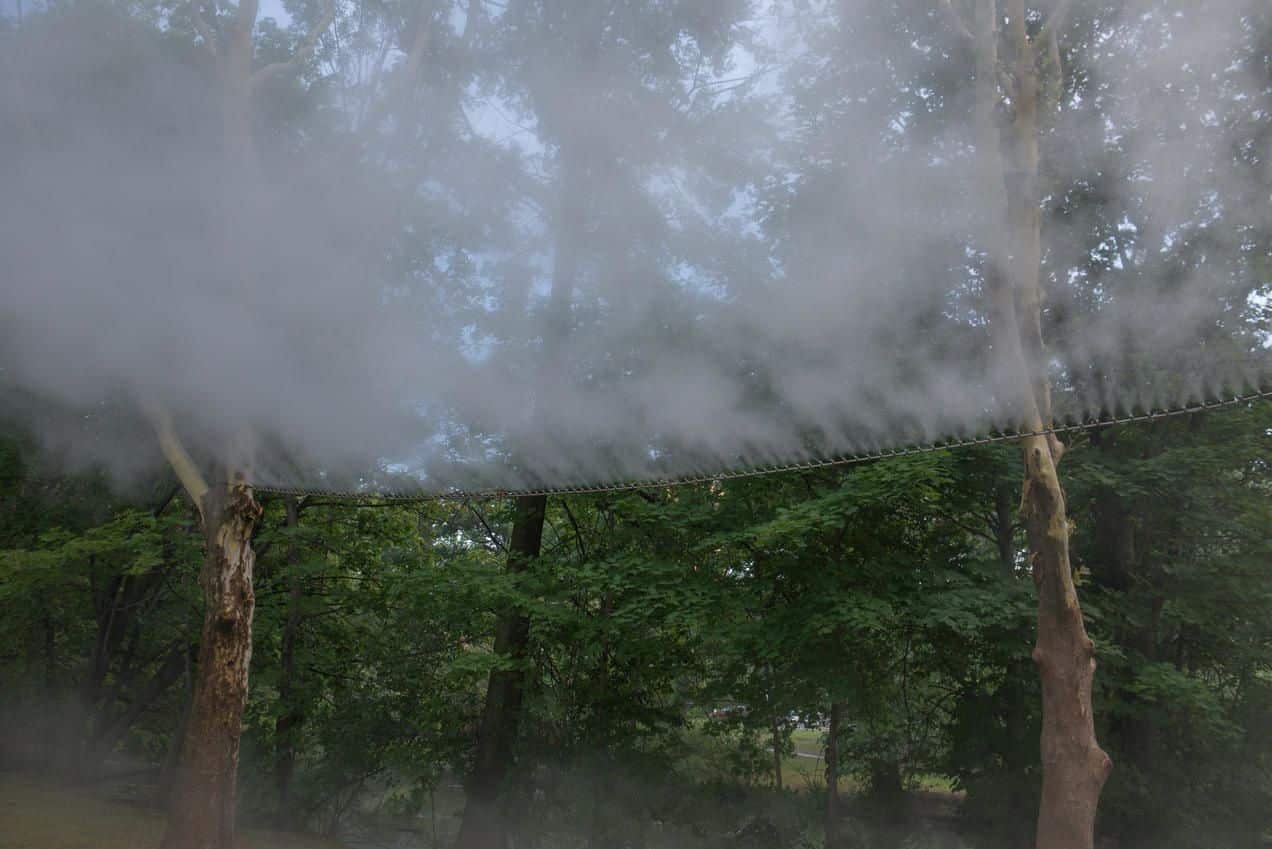 So Fujiko Nakaya teamed up with physicist Thomas Mee in 1969 to develop the system she still uses today. Pure, pressurized water is forced through a narrow nozzle, where it hits a pin that makes it scatter into droplets just 15-to-20 microns wide. The result is a far cry from the hokey fog machines you might find in a haunted house. The fog she creates is as close to the real deal as a highly engineered system can get. By 1970 Nakaya was introducing her woman-made clouds to the world at the Osaka Expo.

Taking in Nakaya’s sculptures is a full-body experience. First comes the serpentine hiss of the nozzles. As the fog quickly thickens, it consumes your field of vision. Think of the sudden whiteout when an airplane dips into a cloud, but then imagine you can feel the cloud, too, and walk around inside it. There’s a sudden temperature drop as tiny water droplets appear all over your body, the hairs on your arms stand up, and you find yourself subconsciously thinking of other distant memories of fog. 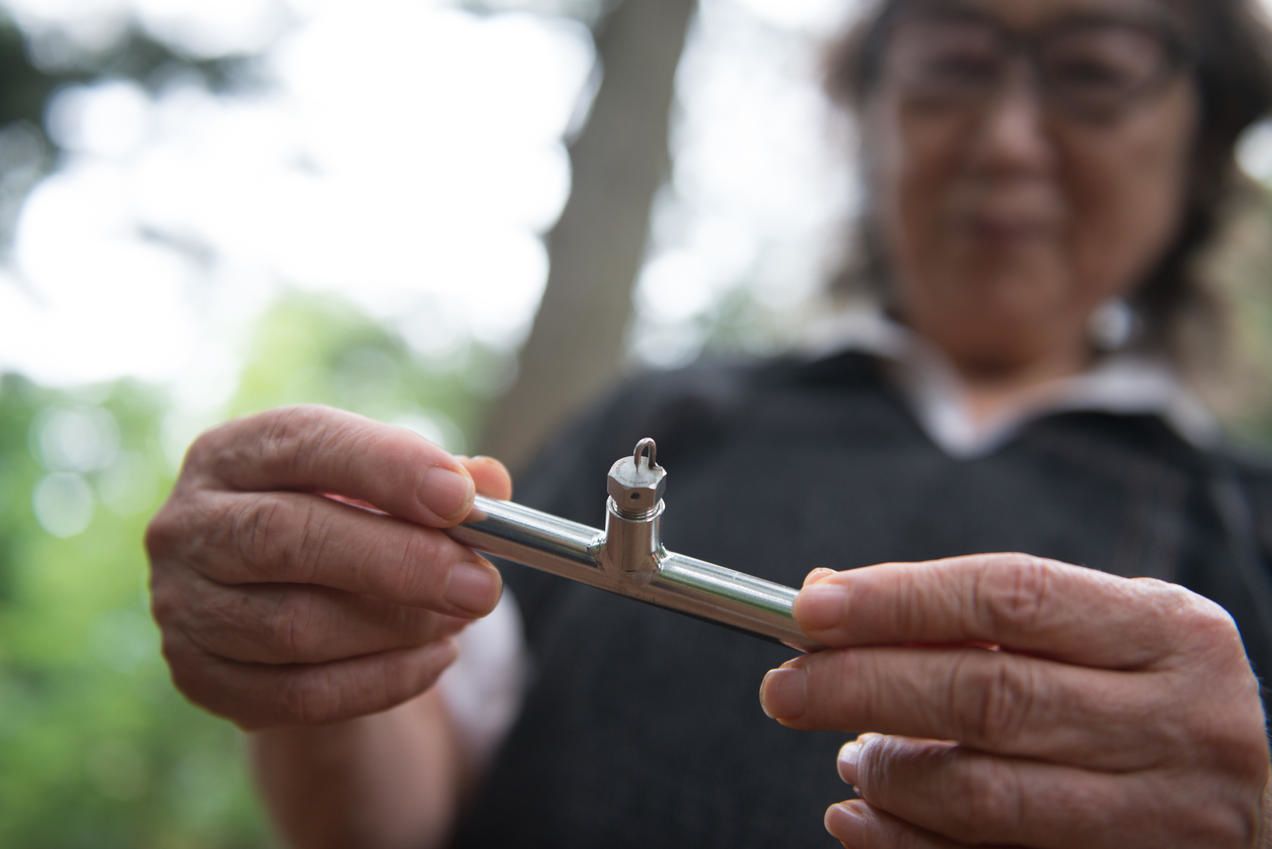 Artist Fujiko Nakaya with one of her patented fog nozzles.Melissa Ostrow

The fog somehow both transports you to another time and place and roots you firmly in the present. It responds to wind, humidity, temperature, and dew point, making visible the invisible forces that surround us all the time. Nakaya’s sculptures roll down hills, hover over water and bounce over structures, gently shaped by the landscape that contains them.

“Hopefully people are slowing things down, taking in the environment, reflecting on what it means to be in nature,” said Arnold Arboretum of Harvard director Ned Friedman. “The sculpture reminds you to become more intimate with the plants around you.”

The five Fog x FLO sculptures run half-hourly for anywhere from two to eighteen minutes. When the nozzles shut off, the fog lifts just as quickly as it appeared, leaving visitors to muse on their surroundings. 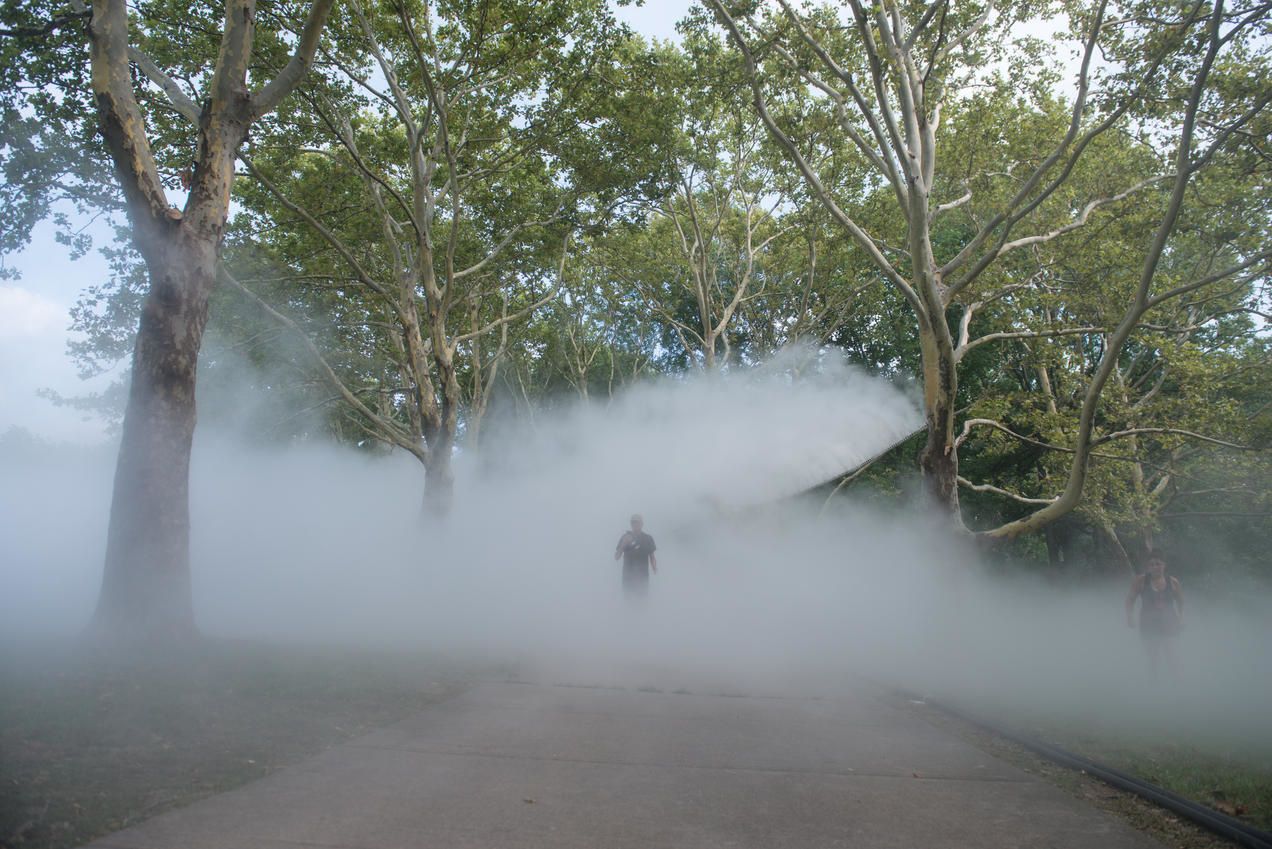 The “FLO” in Fog x FLO stands for Frederick Law Olmsted, widely credited as the father of landscape architecture. Olmsted designed the Emerald Necklace in the late 19th century, along with other American cultural landmarks such as Manhattan’s Central Park, Prospect Park in Brooklyn, the U.S. Capitol grounds and the Biltmore Estate near Asheville, North Carolina.

Olmsted wanted to connect the Boston Common, which dates back to colonial times, and the Public Garden, established in 1837, to Franklin Park. He intuitively sensed what modern science is now proving: that spending time in nature benefits both physical and mental health.

“He was setting up these parks so that you could walk through and experience this variety of marsh, fens, river, fields, pond, arboretum … and you would never have to leave the city,” Mergel said.

The Emerald Necklace also provides flood mitigation to Boston, making it one of the earliest examples of green infrastructure. Olmsted believed in the “genius of place” and sought to enhance natural characteristics, rather than to tame the landscape into submission. “He designed a park system that looks so natural that people think it is,” said Karen Mauney-Brodek, president of the Emerald Necklace Conservancy. 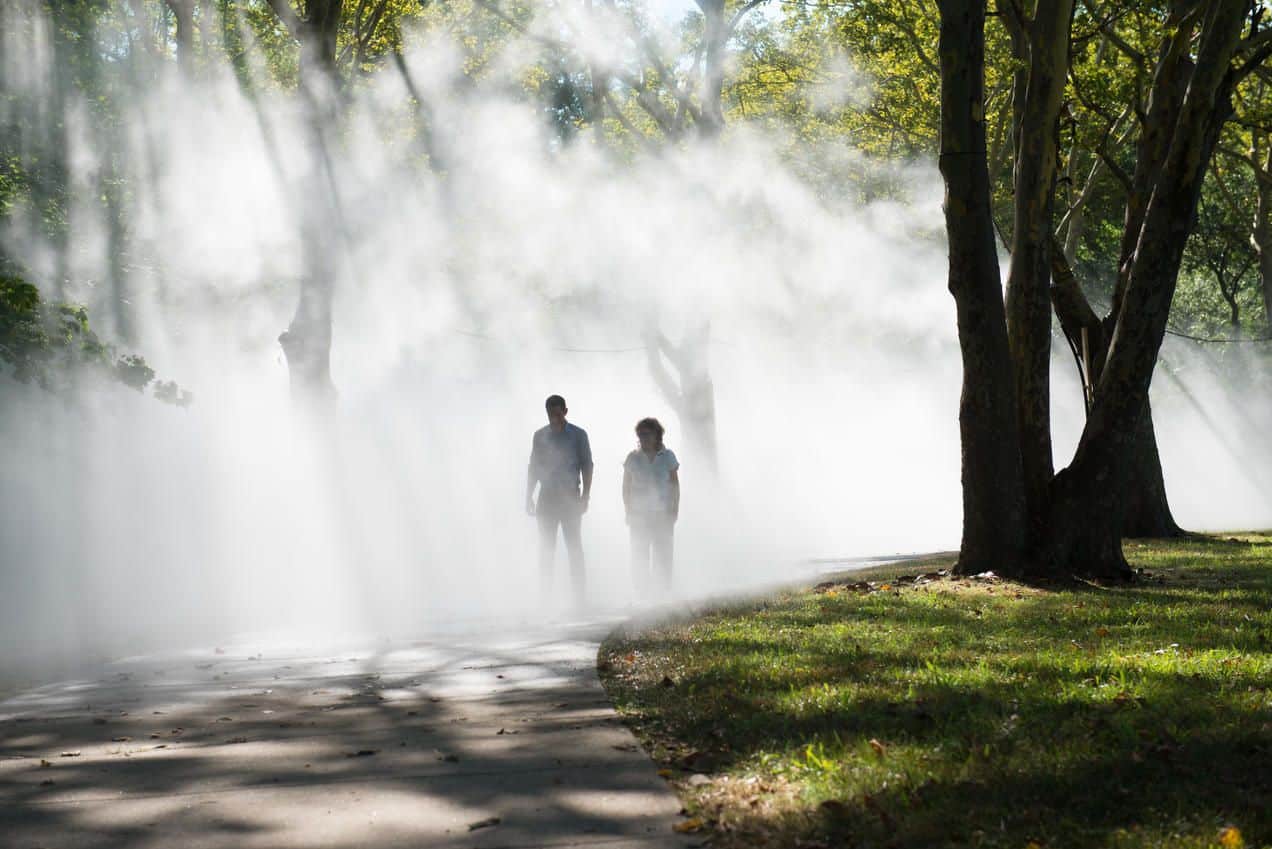 The conservancy expects Fog x FLO to draw between 800,000 and 1 million visitors during its three-month run, an opportunity to raise the Emerald Necklace’s profile, introduce Bostonians to its history, and show off the services the parks continue to provide.

“This is not a white cube situation where you would just neutrally plop any art in this space. [The Emerald Necklace] is a work of art in and of itself, and anything that you place here cannot distract or detract from your experience of the natural and Olmsted’s intent,” Mergel said. “Fujiko’s work is very complementary, a type of art that she describes as a conversation with nature.”

Like the clouds she creates, that conversation changes over time. Nakaya positions her nozzles, with great intentionality, based on the weather patterns for a given area. Over the course of 50 years of being intimately attuned to meteorology, she’s witnessed those patterns becoming more extreme. 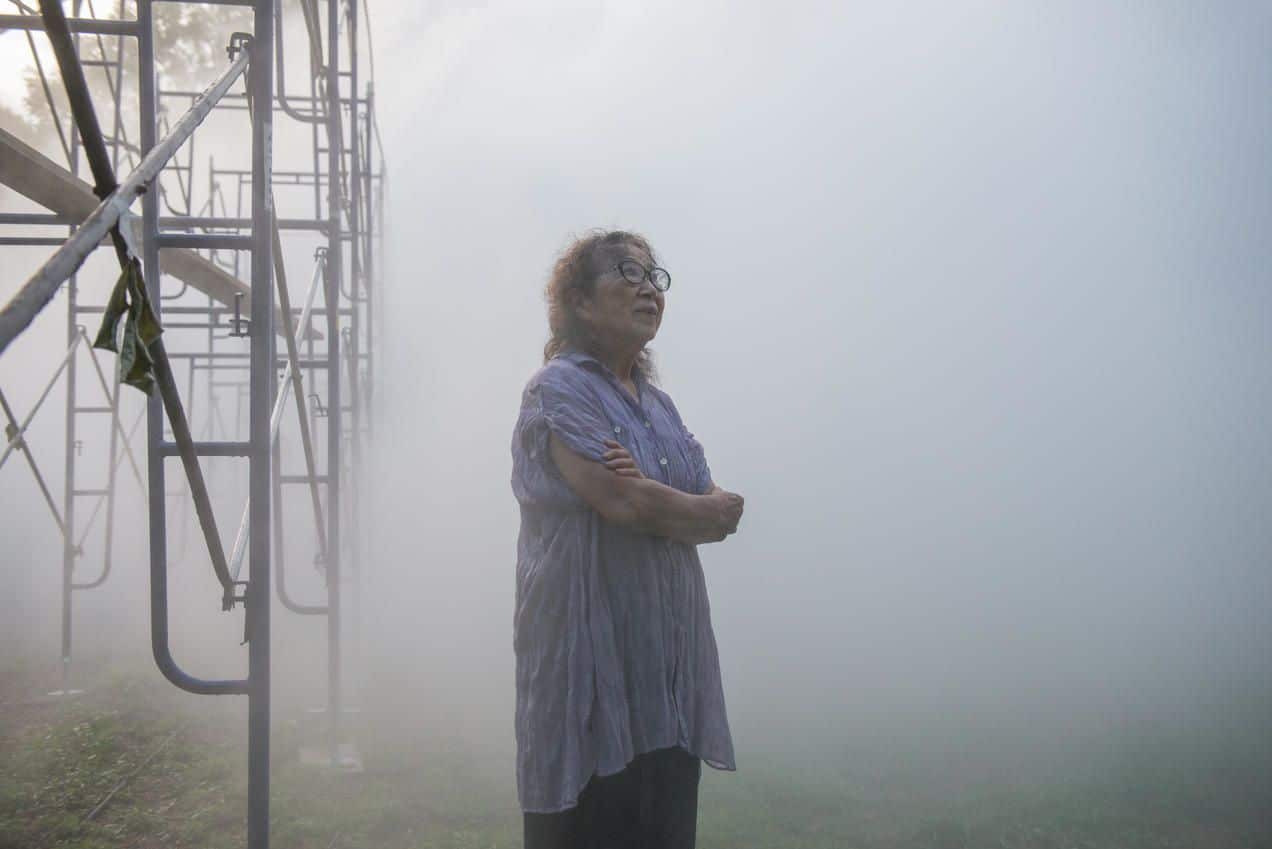 Nakaya had to nix the original site she selected for a sculpture at the Arnold Arboretum, for example, because there was no nearby water source. The staff has successfully maintained the 15,000-plant collection since 1872 without irrigation—until now. In July, an Asian oak collected in Japan in 1892 had to be removed after a prolonged decline associated with extreme drought in the summer of 2016. “All of a sudden, we’re just trying to keep things from dying,” Friedman said.

But in today’s sociopolitical climate, perhaps the most important parallel between Olmsted’s parks and Nakaya’s sculptures is their accessibility. Olmsted saw beautiful public spaces as the right of every citizen and a vital component to a thriving society. “It was something for everyone,” Mergel said. “The wealthiest and the least wealthy, someone who was a new immigrant to the city and someone whose family had been here for generations.”

Nakaya’s works are similarly democratic. Unlike most sculptures, the fog has no boundaries.

Fox x FLO: Fujiko Nakaya on the Emerald Necklace is on display through Oct. 31.