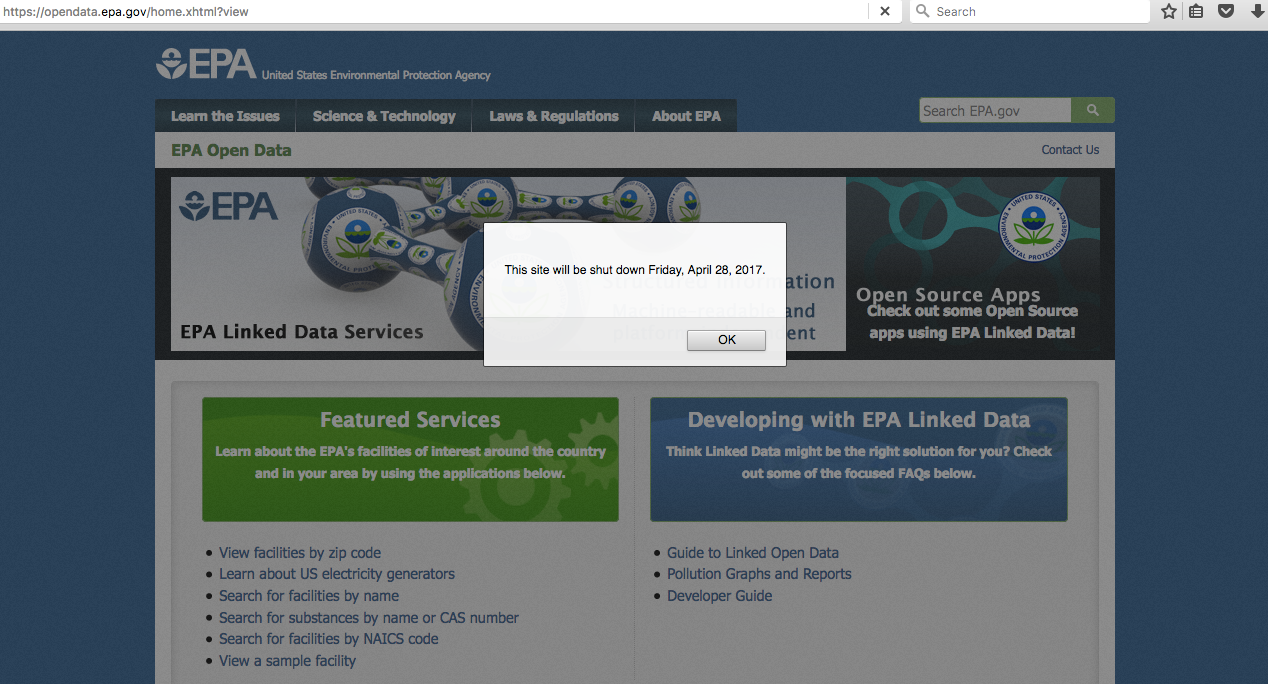 “Last week, after numerous conversations with the U.S. Environmental Protection Agency’s Office of Environmental Information (OEI), and various technical contractors who support them, we were notified that funding is not available to continue operation U.S. EPA’s flagship Open Data Web service,” wrote open data scientist Bernadette Hyland—the CEO and co-founder of 3 Round Stones, a platform for publishing data on the web—in a Medium post on Sunday.

A screenshot taken from the site this morning around 7:50 a.m. shows a popup announcing the Friday shutdown.

Hyland noted in her post that the U.S. EPA Open Data Service website, which has been publicly available since 2016, provides human- and machine-readable information for more than 4 million EPA-regulated facilities, from dry cleaners to nuclear power plants. The critical service contains linked open data on 30 years of toxic releases into the environment maintained by the EPA Toxics Release Inventory Program, she wrote.

Hyland detailed how the EPA contacted her Fredericksburg, Virginia-based company and said, “We need to be ready to turn-off the EPA Open Data web service by noon on April 28, 2017—the last day of the current continuing resolution. If Congress does not pass a budget, we will be facing a government shutdown and won’t be able to give technical direction to continue any work.”

The EPA, however, tweeted today that, “Rumors about the website http://opendata.epa.gov/ are wrong. It’s open, working & not going anywhere. This website & the EPA belong to you.”

As the Independent explained, if the site were to shut down, this means that “citizens will no longer be able to access information on their environment and climate, keeping them from researching potentially fatal changes to their area.”

It is well known that President Trump‘s administration has been wiping Obama-era climate initiatives off the Internet. Rex Tillerson‘s State Department has scrubbed from its websites the mention of President Obama’s Climate Action Plan to reduce carbon pollution and other efforts on fighting climate change.

And it emerged last week that Rick Perry’s Department of Energy has significantly altered its websites on renewable energy, removing references on how clean energy technologies can reduce the nation’s reliance on fossil fuels and help lower climate-changing emissions.

Meanwhile, Reuters reported that the president will sign new executive orders this week, including two on energy and the environment to make it easier for the U.S. to develop energy on and offshore.