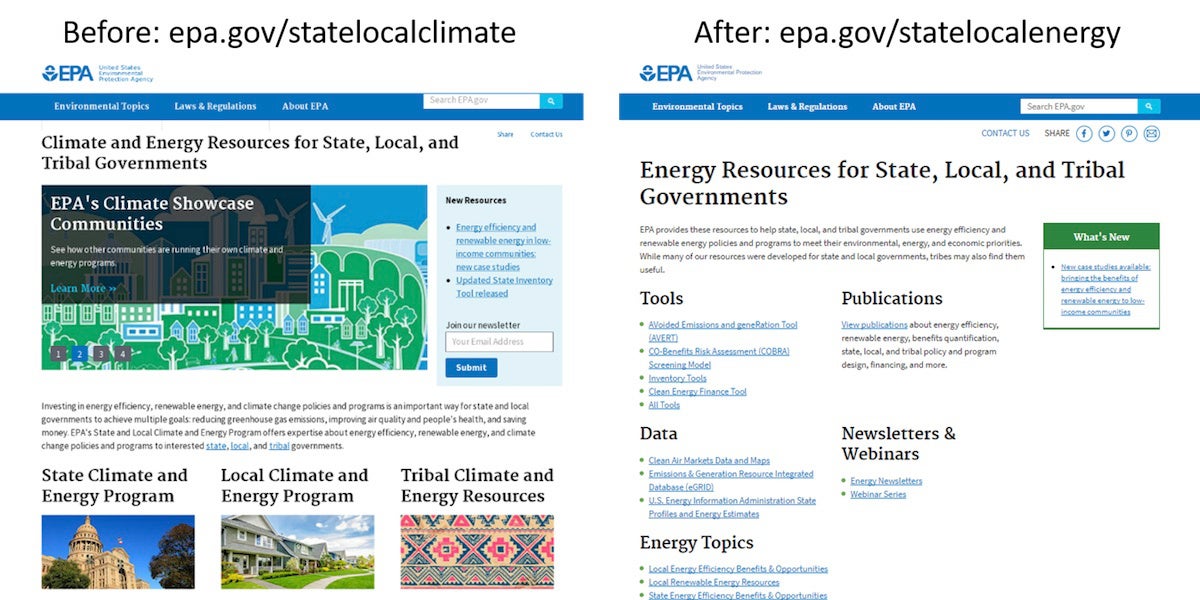 In the Trump administration’s ongoing efforts to pretend that climate change doesn’t exist, the U.S. Environmental Protection Agency (EPA) has made dramatic changes to a website catered to helping states, local and tribal governments learn about global warming and how prepare and respond to the impacts of our hot new world, according to a new analysis from the watchdog group Environmental Data and Governance Initiative (EDGI).

But that’s not the only change—the old site consisted of about 380 pages of content, while the new site consists of about 175. The current website leaves out vital resources including information on how local governments can invest in clean energy, curb emissions and adapt to extreme weather conditions.

EDGI, which has been closely tracking changes to federal websites since President Trump took office, noted that this is the first example of returned content since the EPA began overhauling its climate change website on April 28.

“Large portions of climate resources that were formerly found on the previous website have not been returned, and thus have ultimately been removed from the current EPA website (though many of these resources can still be found in the January 19 snapshot of the EPA website),” the organization explained. “The new website launch was done without an accompanying news release and the decision not to include particular climate resources was not explained.”

As EDGI pointed out, “The continued removal of Web content makes it more difficult for the public and for state, local, and tribal governments to access climate-related Web resources. Moreover, without clear notice from the EPA explaining its decision to remove information and resources, website users may be confused as to why the removals were necessary: was the removed content inaccurate or is there some other kind of justified change in priority or policy? This lack of transparency in the EPA’s website overhaul process harms the public’s understanding of our government’s operations and is a concerning indicator for the possible future mishandling of Web resources to come.”

“There is no more significant threat than climate change and it isn’t just happening to people in far-off countries—it’s happening to us,” she said in a statement to the New York Times. “It is beyond comprehension that EPA would ever purposely limit and remove access to information that communities need to save lives and property. Clearly, this was not a technical glitch, it was a planned shutdown.”

The EPA did not respond to the Times’ requests for comment on the EDGI report.