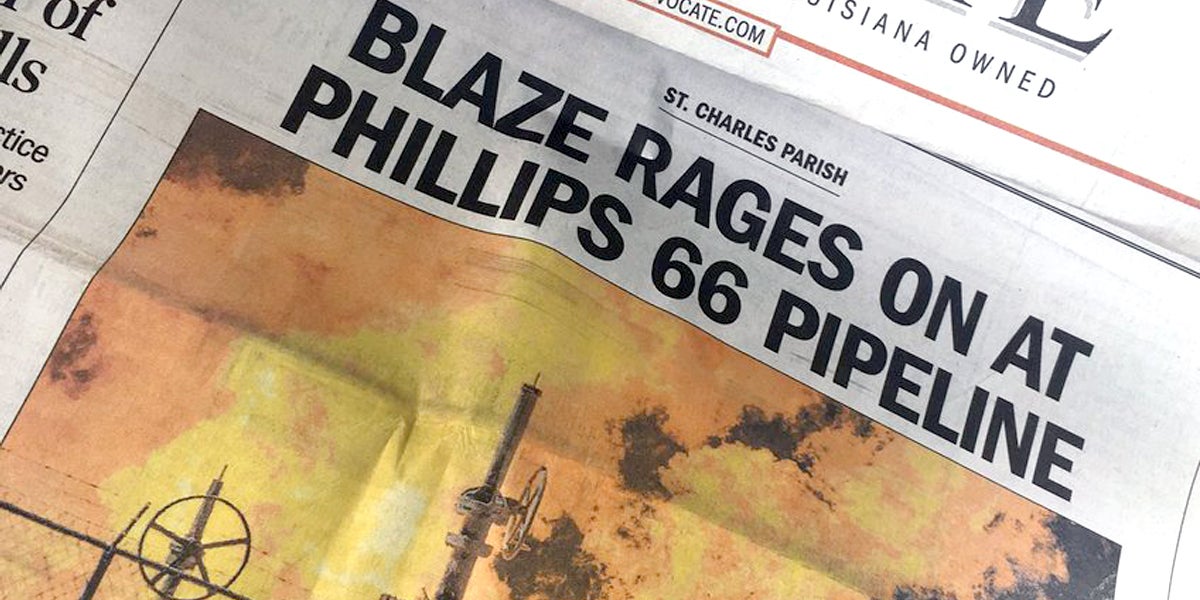 The energy company behind the disputed Dakota Access Pipeline (DAPL) has reported hundreds of thousands of gallons of spills from pipelines between 2015 and 2016, according to an analysis released earlier this month.

According to the Feb. 6 report from the Louisiana Bucket Brigade and DisasterMap.net, Energy Transfer Partners and its subsidiary Sunoco have filed 69 accidents over the past two years to the National Response Center, the federal contact point for oil spills and industrial accidents.

That’s 2.8 accidents every month, the analysis said, adding that “these are just the accidents that are reported.”

“Heavy rain was the explanation for some of the worst accidents. Bad weather, however, just exposes faulty equipment,” the report states. “While Energy Transfer Partners and other companies portray weather related accidents as unavoidable, they are in reality a result of poor planning and neglected maintenance. For example, the largest tank fire in history happened in south Louisiana in 2001. Because it occurred during a storm, Orion Refining blamed the weather. In truth, a faulty drain on the tank sank the roof, exposed the gasoline and attracted lightening.”

Pipeline proponents have repeatedly touted that pipelines are much safer than tankers or trains. But as the report revealed, the majority of Energy Transfer Partners and Sunoco’s reported spills (51 percent) were specifically linked to pipelines.

Those 35 pipeline-related spills released 111,559 gallons of oil and polluted rivers in four different states, the Louisiana Bucket Brigade pointed out on its Facebook page.

But the tribe was dealt a major setback on Monday when federal judge refused to issue a temporary injunction against construction of the DAPL.

Pipeline opponents argue that the DAPL crosses sacred land and would threaten the drinking water for the Standing Rock Sioux Reservation as the proposed route cuts through the Missouri River.

The Louisiana Bucket Brigade itself is battling the proposed Bayou Bridge Pipeline, which is also Energy Transfer Partners-operated. The 162-mile pipeline would cut through “the heart of Louisiana’s Cajun Country,” carrying oil from Nederland, Texas, to St. James Parish, Louisiana, near New Orleans.

The planned route crosses major bodies of water and important ecological sites, including the Atchafalaya Basin, Calcasieu, Vermillion and the Mermentau Rivers, as well as Bayou Lafourche and Bayou Teche. The Vermillion River and Bayou Lafourche are sources of drinking water and the Atchafalaya Basin is the country’s largest wetland and swamp, and home to several endangered species.

“Sunoco and Energy Transfer Partners accidents stretch from Texas to Massachusetts,” said Dr. Ezra Boyd, a geographer with DisasterMap.net who conducted the research. “While these accidents cover a large area of the map, the Bayou Bridge pipeline would put an entirely new area at risk: south central Louisiana, including the Atchafalaya Basin.”

“The oil industry and the elected officials they’ve bought off are claiming that pipelines are safer despite the facts,” added Anne Rolfes, founding director of the Louisiana Bucket Brigade. “What we know is that Energy Transfer Partners had 35 pipeline accidents in two years. There’s nothing safe about that.”

Renate Heurich of 350 Louisiana noted there are far safer and environmentally friendly alternatives to pipelines.