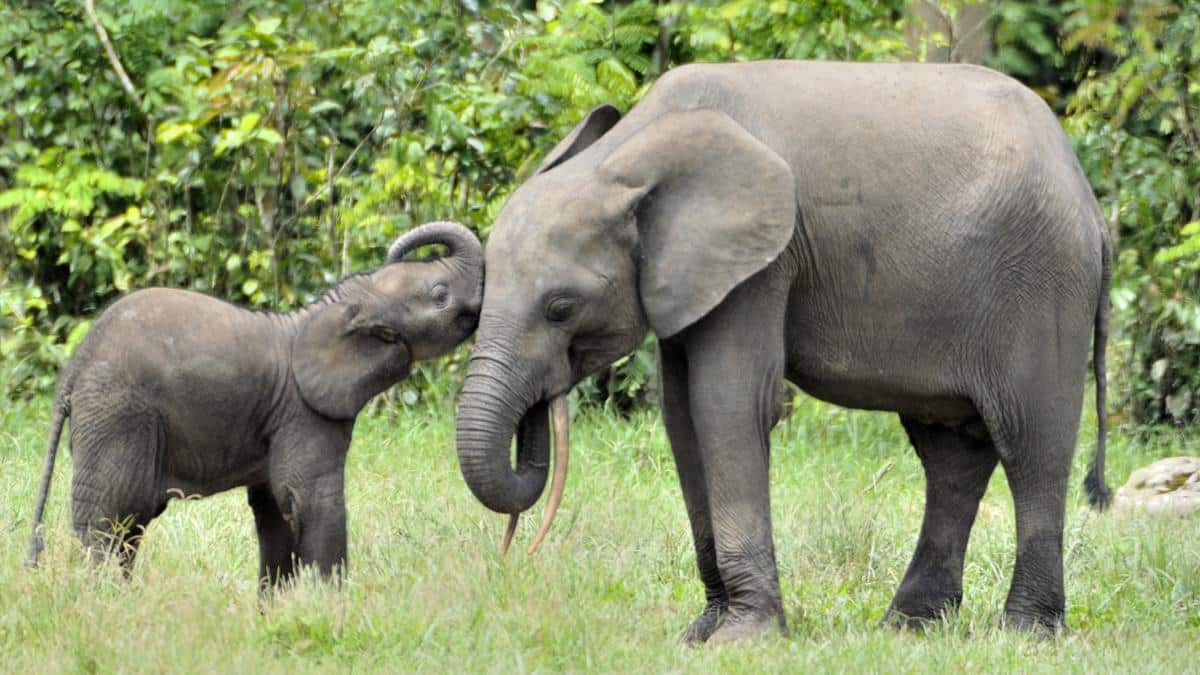 Despite their massive size, African forest elephants remains an elusive species, poorly studied because of their habitat in the dense tropical forests of West Africa and the Congo.

But the more we learn about them, the more we know that forest elephants are in trouble. Like their slightly larger and better-known cousins, the bush or savannah elephants (Loxodonta africana), forest elephants (L. cyclotis) face rampant poaching for their majestic ivory tusks and the growing bush meat trade. More than 80% of the population has been killed off in central Africa since 2002.

Today fewer than 100,000 forest elephants occupy their dwindling habitat. Conservationists worry they could soon head toward extinction if nothing is done.

And now a new threat has emerged: A study published this September found that climate change has resulted in an 81% decline in fruit production in one forest elephant habitat in Gabon. That’s caused the elephants there to experience an 11% decline in body condition since 2008.

But other research, also published in September, suggests a possible solution to both these crises.

It all boils down to carbon dioxide.

Forest elephants play a huge role in supporting the carbon sequestration power of their tropical habitats. Hungry pachyderms act as mega-gardeners as they roam across the landscape searching for bits of leaves, tree bark and fruit; stomping on small trees and bushes; and spreading seeds in their dung. This promotes the growth of larger carbon-absorbing trees, allowing forests to sequester more carbon from the air.

A July 2019 study by ecologist Fabio Berzaghi, a researcher at the Laboratory of Climate and Environmental Sciences in France, estimated that if forest elephants disappeared African forests would lose 7% of their biomass — a stunning 3 billion-ton loss of carbon.

And they’re not unique in this oversized role, although the closest equivalent lives in an entirely different type of habitat.

Last year a team of researchers led by Ralph Chami, an economist and assistant director at the International Monetary Fund, published a groundbreaking report on the monetary value of great whales, the 13 large species that include blue and humpback whales. The study accounted for whales’ enormous carbon-capturing functions, from fertilizing oxygen-producing phytoplankton to storing enormous amounts of carbon in their bodies when they die and sink to the seafloor. After also including tourism values, Chami’s study estimated each whale was worth million, amounting to a staggering trillion for the entire global population of whales.

“It’s a win-win for everyone,” Chami says of his economic models, which place a monetary value on the “natural capital” of wildlife, including the carbon sequestration activities of whales and elephants. “By allowing nature to regenerate, [elephants and whales] are far more valuable to us than if we extract them. If nature thrives, you thrive.”

Soon after the publication of Chami’s whale study, Berzaghi called and asked if the economist could run the numbers on forest elephants too. Chami agreed, and this September they published the results. The elephants, they calculated, are worth about .75 million each due to their forest carbon sequestration value alone.

Even more importantly, they found that if forest elephants were allowed to rebound to their former populations, their carbon-capturing value would jump to more than 0 billion.

And as climate change worsens, Chami says forest elephants will become even more valuable in terms of their carbon sequestration role — and as individuals. “The loss of their habitats has the impact of causing them more stress and to have fewer babies,” he says.

Despite these stunning, if theoretical, numbers, the researchers knew they needed a financial plan that could be implemented and sustained in the real world.

That starts with keeping elephants alive.

Poachers receive pennies on the dollar for elephant tusks that, once they finally reach consumers, can fetch prices of up to ,000 on the illegal ivory market.

Chami says that pales in comparison to the .75 million an elephant could be worth for its carbon sequestration services, an amount that works out to roughly a day over an elephant’s 60-year average lifetime.

But how do you deliver that value to the people who live near elephants, including people who perhaps currently poach the animals? Chami turned to worldwide carbon markets, which encourage countries or companies to offset their greenhouse gases by investing in restorative measures in other parts of the world.

To activate that proposed value, Chami brought together a group of conservation, business technology and economic experts to develop a pilot project that could promote the protection of forest elephants in Africa. Together, they aim to create a legal framework and a secure financial distribution system that would use of carbon markets to pay local communities to protect forest elephants. Individual elephants would be tracked using satellite technology to ensure their safety. As long as the elephants remain alive, communities could receive regular payments from a carbon market funded by corporations, individuals and governments to offset their pollution. Elephants could become “living assets” for countries that protect them.

Those assets could add up. Chami says the population of 1,500 elephants in Gabon’s Loango National Forest would provide .4 million in annual revenue.

“We need to build a market around living elephants,” Chami says. “The poachers can become the caretakers.”

That’s an exciting concept to wildlife experts, who have already had some success empowering communities through tourism. But for elephants that live in remote areas of African forests, tourism is less of an option. A market that places a value on elephants for their global carbon sequestration and climate contributions opens a new opportunity for support.

“It potentially changes how people think of the value of elephants,” said Ian Redmond, a renowned African conservationist who’s working with Chami and others to fund forest elephant protection efforts.

Redmond says he’s thrilled about this new plan because it incentivizes locals to protect their natural resources, not exploit them.

“It’s a gamechanger, not just for its ecological benefits, but for poverty reduction,” he says. “It’s a mechanism of change for people in the forest for people who before now only get money if they kill something. Now there’s an economic incentive to protect the elephants and their carbon-rich habitat so everyone benefits, locally and globally.”

The trick, the experts say, is getting money dispersed fairly and securely to local communities. Chami’s team says the revolution in new secure financial networks such as blockchain, the building block of digital monetary systems like Bitcoin, can help establish a monetary system that can be more efficient and transparent than traditional banking systems. Africa’s ahead of the curve when it comes to dealing in these new digital monetary technologies, which, though not perfect, can be a positive anti-corruption tool in the murky world of international carbon markets and debt swaps sometimes linked to fraud and influence peddling.

Walid Al Saqqaf, a startup founder and technology expert who produces the weekly podcast Insureblocks, is working closely with Chami and conservationists like Redmond to tap into global carbon exchange markets and create a framework for local funding efforts. Al Saqqaf says the secure nature of blockchain technology can attract international governmental agencies as well as private sector banks and insurance companies who will increasingly want to offset carbon footprints by investing in carbon-sequestering natural resources. “We take a toxic asset such as carbon and transform it into carbon for social good,” Al Saqqaf says.

The group is setting up technology, legal and science working groups to develop a cohesive plan that could go into effect next year, although the conservation team says it’s too early to announce specifics of the pilot program. They say they are in early discussions with African governments hoping to protect their elephants as well as private enterprises interested in offsetting carbon emissions.

A Ticking Clock, But Forward Motion

Meanwhile the threats from both climate change and poaching continue. A study published this June found that, despite efforts to reduce the ivory trade, elephant poaching rates remain “near their peak and have changed little since 2011.”

The rapidly growing risks of extinctions, fueled in part by climate change, have pushed the team to quickly get their ground-breaking plan up and running. “We are in a race against time,” Al Saqqaf says.

While the work on elephants remains on the drawing board, Chami’s earlier study on the economic value of whales has already started generating real-world action. A G20 working group recommended this year that member countries take whales into account for their climate mitigation and ecosystem values. In Chile a national initiative is using Chami’s economic model to help design a project called the Blue Boat Initiative, a sophisticated satellite and sea-based plan supported by the Chilean government to protect whales from ship collisions.

“The valuation of ecosystem services is very relevant because it allows us to show the oceans are not only a raw material,” says Patricia Morales, general manager of Fundacion Cortes Solari, a private foundation that supports the Blue Boat Initiative and other climate and environmental issues. “We need to move from the current paradigm to the blue economy.”

Chami says the positive global response to their work is rewarding, but it’s far from complete. His team — which plans to apply this methodology to other species — knows the dire state of the natural world, and the challenges of creating new international funding and conservation models are huge. But Chami and his colleagues say that by “translating science into dollars,” researchers can build a powerful market-based mechanism that can reverse society’s incentive to destroy the natural world.

“We need to learn to live in balance with nature,” Chami says. “Our sustainability depends on protecting our ecosystems.”

Rocky Kistner is an environmental journalist and a former broadcast television and radio reporter and producer. He writes for a variety of online publications and lives near DC, raising two daughters and a beagle named Wilma.