The best of EcoWatch, right in your inbox. Sign up for our email newsletter!
conservation

A tree trunk killed by emerald ash borers showing missing bark and tracks of the larvae worm in the wood. catnap72 / iStock / Getty Images Plus

The emerald ash borer (Agrilus planipennis) is a deceptively attractive metallic-green adult beetle with a red abdomen. But few people ever actually see the insect itself – just the trail of destruction it leaves behind under the bark of ash trees.

These insects, which are native to Asia and Russia, were first discovered in Michigan in 2002. Since then they have spread to 35 states and become the most destructive and costly invasive wood-boring insect in U.S. history. They have also been detected in the Canadian provinces of Ontario, Quebec, Manitoba, New Brunswick and Nova Scotia.

In 2021 the U.S. Department of Agriculture stopped regulating the movement of ash trees and wood products in infested areas because the beetles spread rapidly despite quarantine efforts. Now federal regulators and researchers are pursuing a different strategy: biological control. Scientists think that tiny parasitic wasps, which prey on emerald ash borers in their native range, hold the key to curbing this invasive species and returning ash trees to North American forests.

I study invasive forest insects and work with the USDA to develop easier ways of raising emerald ash borers and other invasive insects in research laboratories. This work is critical for discovering and testing ways to better manage forest recovery and prevent future outbreaks. But while the emerald ash borer has spread uncontrollably in nature, producing a consistent laboratory supply of these insects is surprisingly challenging – and developing an effective biological control program requires a lot of target insects.

The Value of Ash Trees

Researchers believe the emerald ash borer likely arrived in the U.S. on imported wood packaging material from Asia sometime in the 1990s. The insects lay eggs in the bark crevices of ash trees; when larva hatch, they tunnel through the bark and feed on the inner layer of the tree. Their impact becomes apparent when the bark is peeled back, revealing dramatic feeding tracks. These channels damage the trees' vascular tissue – internal networks that transport water and nutrients – and ultimately kill the tree.

Before this invasive pest appeared on the scene, ash trees were particularly popular for residential developments, representing 20-40% of planted trees in some Midwestern communities. Emerald ash borers have killed tens of millions of U.S. trees with an estimated replacement cost of U.S.$10-25 billion.

Ash wood is also popular for lumber used in furniture, sports equipment and paper, among many other products. The ash timber industry produces over 100 million board feet annually, valued at over $25 billion.

Why Quarantines Have Failed

State and federal agencies have used quarantines to combat the spread of several invasive forest insects, including Asian longhorned beetles and Lymantria dispar, previously known as gypsy moth. This approach seeks to reduce the movement of eggs and young insects hidden in lumber, nursery plants and other wood products. In counties where an invasive species is detected, regulations typically require wood products to be heat-treated, stripped of bark, fumigated or chipped before they can be moved.

The federal emerald ash borer quarantine started with 13 counties in Michigan in 2003 and increased exponentially over time to cover than a quarter of the continental U.S. Quarantines can be effective when forest insect pests mainly spread through movement of their eggs, hitchhiking long distances when humans transport wood.

However, female emerald ash borers can fly up to 12 miles per day for as long as six weeks after mating. The beetles also are difficult to trap, and typically are not detected until they have been present for three to five years – too late for quarantines to work. 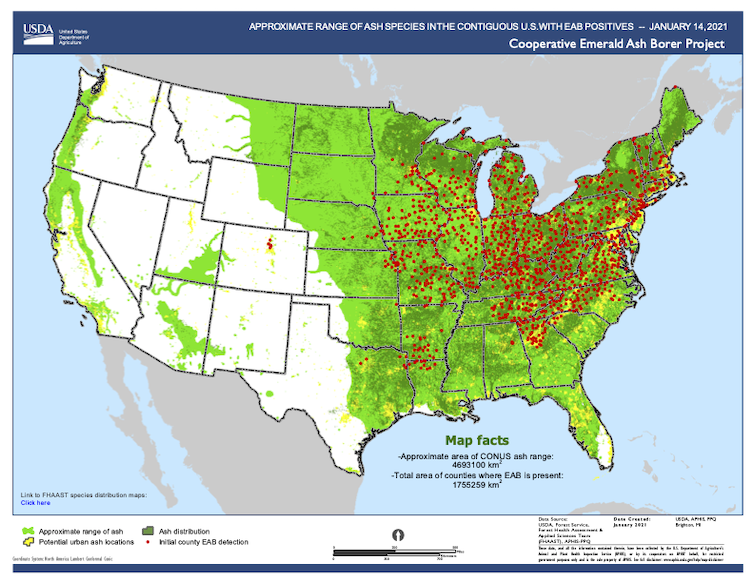 The emerald ash borer has been detected throughout much of the range of ash trees in the U.S. USDA

Any biocontrol plan poses concerns about unintended consequences. One notorious example is the introduction of cane toads in Australia in the 1930s to reduce beetles on sugarcane farms. The toads didn't eat the beetles, but they spread rapidly and ate lots of other species. And their toxins killed predators.

Introducing species for biocontrol is strictly regulated in the U.S. It can take two to 10 years to demonstrate the effectiveness of potential biocontrol agents, and obtaining a permit for field testing can take two more years. Scientists must demonstrate that the released species specializes on the target pest and has minimal impacts on other species.

Four wasp species from China and Russia that are natural enemies of the emerald ash borer have gone through the approval process for field release. These wasps are parasitoids: They deposit their eggs or larva into or on another insect, which becomes an unsuspecting food source for the growing parasite. Parasitoids are great candidates for biocontrol because they typically exploit a single host species.

The selected wasps are tiny and don't sting, but their egg-laying organs can penetrate ash tree bark. And they have specialized sensory abilities to find emerald ash borer larva or eggs to serve as their hosts. 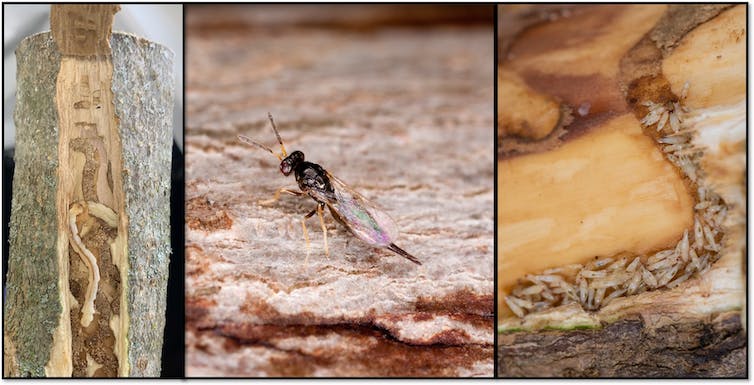 An emerald ash borer larva in wood (left); Tetrastichus planipennisi, a parasitic wasp that preys on ash borers; and wasp larva that have grown and eaten the ash borer. USDA / CC BY-ND

The USDA is working to rear massive numbers of parasitoid wasps in lab facilities by providing lab-grown emerald ash borers as hosts for their eggs. Despite COVID-19 disruptions, the agency produced over 550,000 parasitoids in 2020 and released them at over 240 sites.

The goal is to create self-sustaining field populations of parasitoids that reduce emerald ash borer populations in nature enough to allow replanted ash trees to grow and thrive. Several studies have shown encouraging early results, but securing a future for ash trees will require more time and research.

One hurdle is that emerald ash borers grown in the lab need fresh ash logs and leaves to complete their life cycle. I'm part of a team working to develop an alternative to the time- and cost-intensive process of collecting logs: an artificial diet that the beetle larva can eat in the lab. 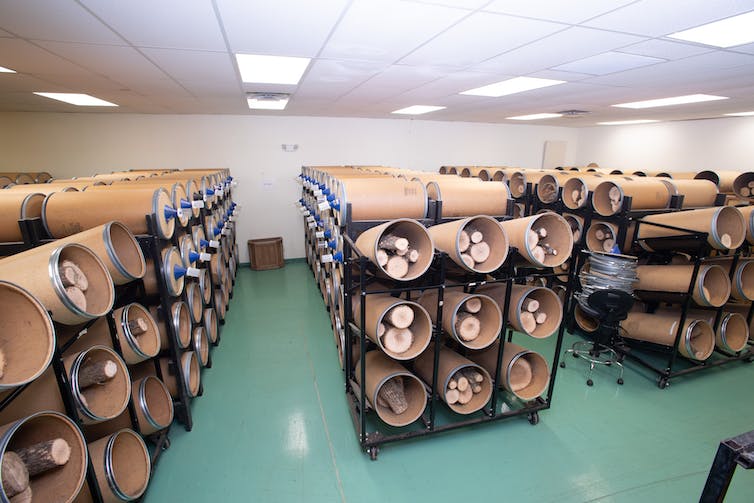 The food must provide the right texture and nutrition. Other leaf-feeding insects readily eat artificial diets made from wheat germ, but species whose larva digest wood are pickier. In the wild, emerald ash borers only feed on species of ash tree.

In today's global economy, with people and products moving rapidly around the world, it can be hard to find effective management options when invasive species become established over a large area. But lessons learned from the emerald ash borer will help researchers mobilize quickly when the next forest pest arrives.

Kristine Grayson is an associate professor of biology at the University of Richmond.