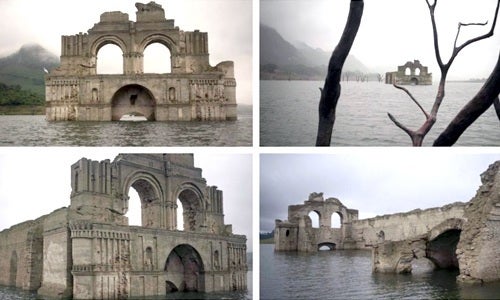 A Mexican church that has been submerged by a dam since 1966 has re-emerged due to a drought, according to the Independent. The church, known as the Temple of Santiago or the Temple of Quechula, is located in the Nezahualcóyotl reservoir in Chiapas, Mexico. Water levels in the Grijalba river, which feeds the reservoir, have dropped so low recently that the church is re-emerging for only the second time since the dam was built five decades ago.

As reservoir recedes amid drought in Mexico, a16th-century church emerges from the water. http://t.co/J5U8CVyiu4 pic.twitter.com/qPQTHDkrOk

The reservoir level has dropped 82 feet because of the drought, exposing the 450-year old church, which measures 183 feet long and 42 feet wide and has 10 feet-high walls, according to The Guardian.

The church, which is believed to have been built by Spanish colonists in 1564, was constructed to account for a growing population in the area, but was soon abandoned because plague struck the area. “The church was abandoned between 1773 to 1776 due to massive plagues sweeping the area,” architect Carlos Navarete, who worked on a report about the structure, told the AP. “Epidemics were common in the Americas from the late fifteenth century, when explorers, settlers and traders introduced bacteria and viruses to the New World,” says IFLScience.

Fishermen in the area have capitalized on the low water levels by ferrying “curious passengers around the ruins,” said the Independent. In 2002, the first time the building emerged, water levels dropped so low that people were able to walk around inside the building, according to the AP. When the church emerged for the first time in nearly 40 years, “the people celebrated,” local fisherman Leonel Mendoza told the AP. “They came to eat, to hang out, to do business. I sold them fried fish. They did processions around the church.” For more on “lost” cities that have later been rediscovered, check out Top 25 Lost Cities by John Green (author of The Fault in Our Stars and Paper Towns).