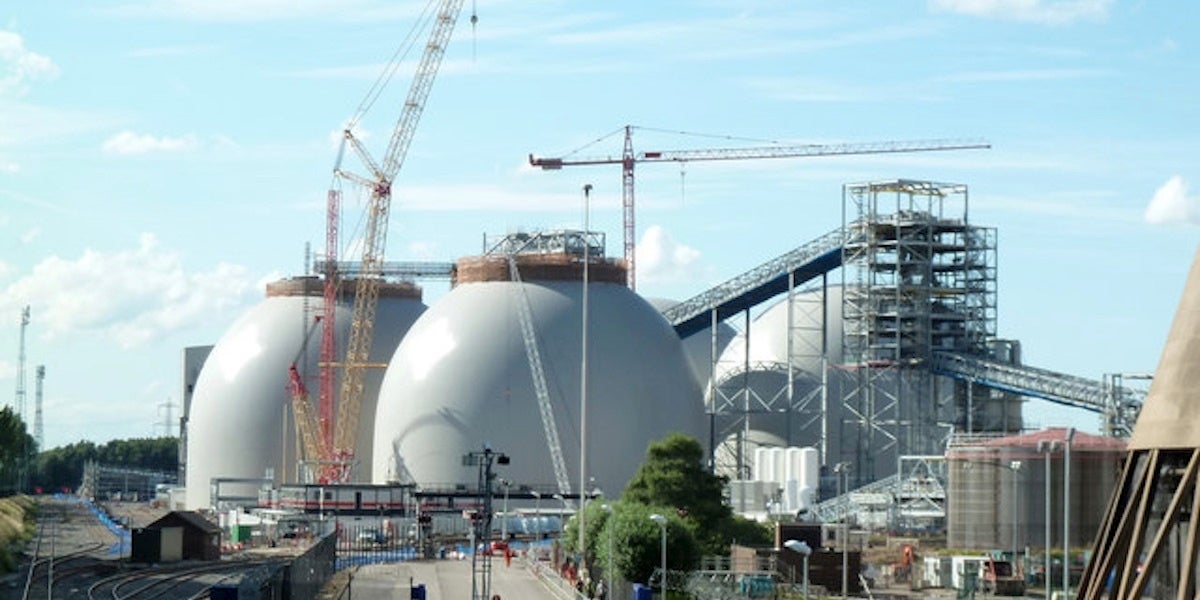 For the first time,
carbon dioxide is being captured at a biomass power plant in the UK.

Britain’s Drax
announced that its pilot bioenergy carbon capture and storage project is expected to capture a ton of CO2 a day from its North Yorkshire-based wood-burning plant. The company is also finding ways to store and use the captured carbon.

“This innovative technology has the potential to make huge strides in our efforts to tackle
climate change while kick-starting an entirely new cutting-edge industry in the UK,” Britain’s energy and clean growth minister Claire Perry said in a press release.

If everything goes to plan, Drax hopes that by scaling up the technology—developed by Leeds-based C-Capture—it can enable the creation of negative-emission biomass power plants, meaning the facilities can remove more
greenhouse gases from the atmosphere than it generates.

The
BBC explained how such plants can go negative:

When a forest grows, the trees absorb carbon dioxide from the atmosphere and use it to make their wood.

If you burn that wood, the process doesn’t emit any extra CO2 into the atmosphere—because the trees removed it from the air in the first place. It’s called carbon neutral.

If you go one step further by capturing the CO2 from wood burning, you’re actually reducing the amount of carbon in the atmosphere overall.

Proponents of carbon capture and storage or CCS, tout it as a way to help stop global temperature rise. Power companies are investing in this technology to trap CO2 on site and prevent the heat-trapping gases from being released into the air. One day, the captured and stored carbon can be repurposed.

For instance, Drax said in its press release that it is in discussions with the British Beer and Pub Association to see if it could use the carbon captured in its pilot to help keep the fizz in the carbonated drinks.

We’re focused on working together to make the progress required for us to tackle #climatechange and enable a zero-carbon, lower-cost energy future

However, critics say the nascent technology is too expensive to implement on a large scale for it to be commercially viable.

“One way to reduce coal’s impact is to capture, compress and bury its emissions—but it’s much simpler, cheaper and safer to simply leave the coal in the ground,” Simon Holmes à Court, a senior adviser to the Energy Transition Hub at Melbourne University, wrote in the Guardian.

Another drawback of “bioenergy carbon capture and storage” projects, like the one at Drax, is the massive quantities of crops being burned for power. Every year, Drax’s biomass plant burns about 7 million metric tons of wood chips—mostly from trees grown in the U.S.—to generate 6 percent of the UK’s electricity, according to the BBC.

Although trees are technically renewable, growing them requires an abundance of land. Cutting them down also negatively impacts the wildlife that depend on the trees.

“We must be cautious of technologies that aim to remediate the carbon problem while greatly expanding our impact on the land,” Harvard University professor David Keith warned to the BBC.