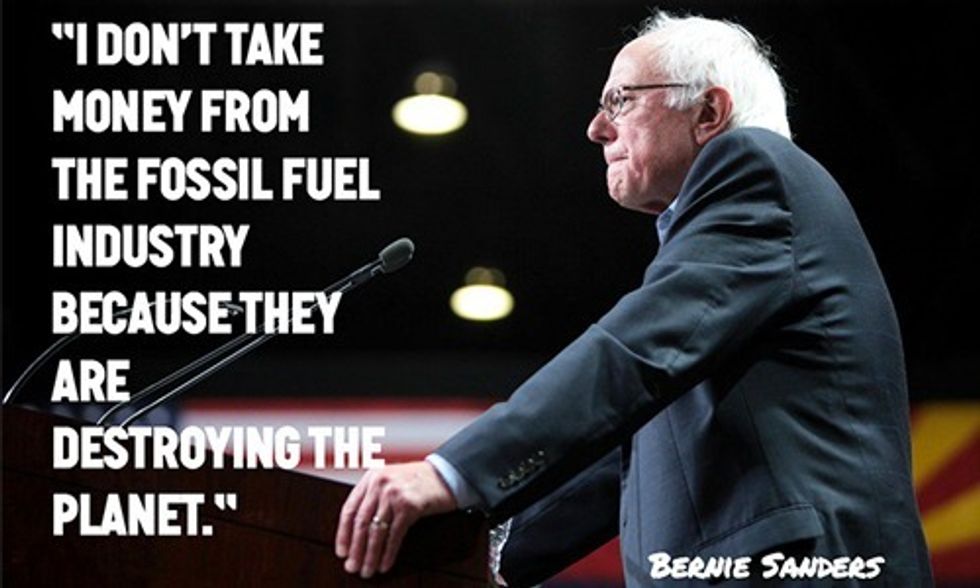 Perhaps it was the rising seas lapping on the doors of the debate hall in Miami last night, but for the first time this election the public got a raucous and spirited debate between Bernie Sanders and Hillary Clinton over the climate policies they would support as president.

“The moderators finally broke their climate silence and the public got what it has been waiting for: a real debate about who will do the most to combat climate change,” said Jamie Henn, a spokesperson for 350 Action.

“Voters across the country are looking for a leader who is willing to stand up to the fossil fuel industry and accelerate a just transition to 100 percent renewable energy. We need to hear more on this issue in the months to come.”

The debate was testament to how far climate activists have helped move both candidates on climate change. Since the beginning of the race, Hillary Clinton has endorsed more and more progressive stances on climate change, such as coming out against the Keystone XL pipeline and limiting fossil fuel development on public lands, while Bernie Sanders has adopted the rhetoric of the “keep it in the ground” movement and is calling on millions of people to rise up and take on the fossil fuel industry.

“We’ve seen a huge shift over the last year,” said Henn. “Democrats have gone from an ‘all of the above’ strategy on climate to all out opposition to the fossil fuel industry. That’s a sign of the growing strength of our movement and the growing realization that the true test of climate leadership is keeping fossil fuels in the ground.”

“Hillary Clinton still needs to convince climate voters that she’s willing to stand up to the fossil fuel industry,” said Henn. “I cringed when I heard her mention natural gas as a bridge fuel. Scientists are now clear that natural gas is a bridge to nowhere and that we must move directly and swiftly to 100 percent renewable energy. Clinton is coming out stronger on climate, but her ties to the fossil fuel industry are still a major cause for concern.”

Both candidates were light years ahead of Republicans on climate change, however and took time to lambast Donald Trump, Ted Cruz and other GOP contenders for ignoring the issue. Sanders said their denial was a direct result of the millions of dollars in campaign contributions Republican candidates accept from the fossil fuel industry.