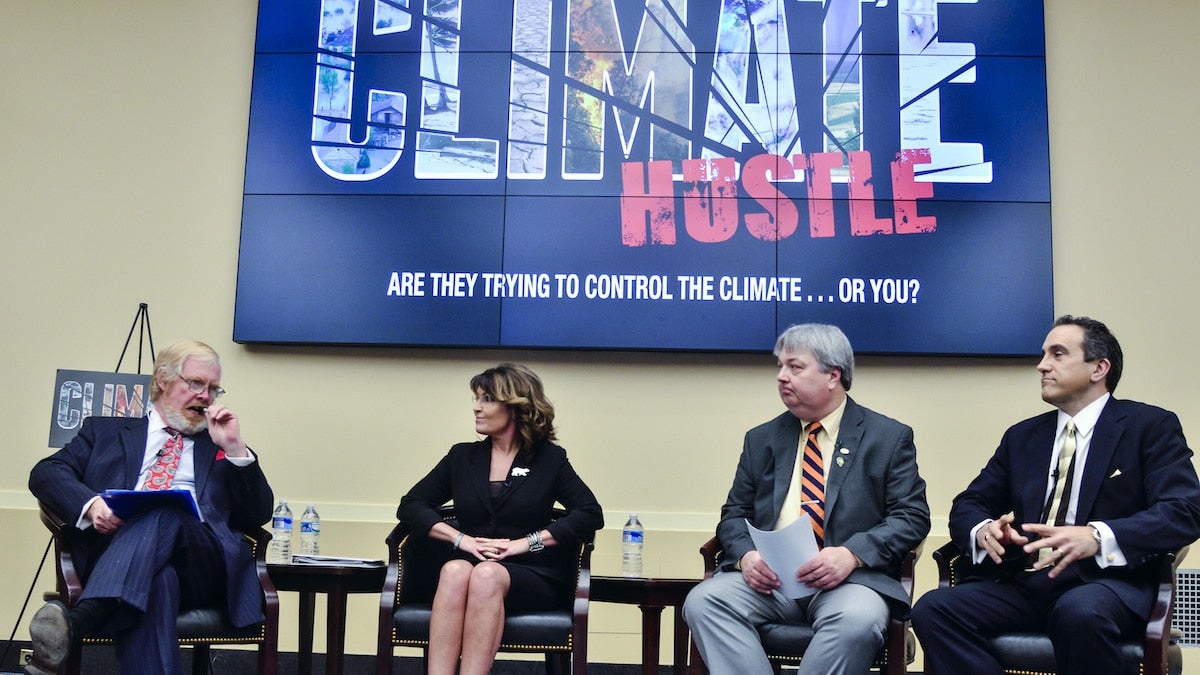 Climate scientists were aghast Monday at the news that David Legates, a University of Delaware professor who has repeatedly questioned the scientific consensus that human activity is causing the climate crisis and has claimed that carbon dioxide emissions are beneficial, has been named by the Trump administration to a top leadership role at the federal government’s climate research agency.

Legates was appointed—without the knowledge of several NOAA officials, according to one person at the agency—to serve as deputy assistant secretary of commerce for environmental observation and prediction and will report directly to acting NOAA Administrator Neil Jacobs.

Gretchen Goldman of the Union of Concerned Scientists (UCS) called the appointment “a slap in the face to NOAA scientists who work daily to conduct and communicate climate science to the public and decision makers.”

“Until now, NOAA has largely evaded the kind of anti-science political appointees that have devastated the EPA and Interior,” Goldman told the Washington Post. “With Dr. Legates we risk seeing the same kind of politicization of science and corruption of ethics.”

Legates served from 2005 to 2011 as Delaware’s state climatologist, and stepped down under pressure from former Democratic Gov. Ruth Ann Minner when it came to her attention that his views on the climate were “not aligned with those of [her] administration.”

“I am directing you to offer any future statements on this or other public policy matters only on behalf of yourself or the University of Delaware, and not as state climatologist,” Minner wrote to Legates in 2007 after he wrote an amicus brief in agreement with the Competitive Enterprise Institute, which opposed Delaware’s attempt to force the federal regulation of greenhouse gases.

The appointment, which one anonymous NOAA official referred to as a surprising “midnight hire over the weekend,” comes as the agency is monitoring the approach of Hurricane Sally. The storm rapidly strengthened on Monday and was expected to cause an “extremely dangerous and life-threatening storm surge” on the Gulf Coast.

NOAA’s National Weather Service has also been issuing warnings to the west coast about the wildfires that have overwhelmed the region in recent days, killing more than 30 people. Agency scientists have contributed to the Intergovernmental Panel on Climate Change’s (IPCC) reports on the climate crisis and the warming of the globe, including the 2018 study which warned that greenhouse gas emissions will pose an increasing threat to human life if they are not drastically reduced in the next 10 to 20 years.

The appointment of Legates to help lead the agency undermines that message, critics say, considering he counts among his climate science work a paper called “The IPCC Reconsidered,” a Heartland Institute-funded project which called for more, not fewer, fossil fuel emissions.

“The juxtaposition of the apocalyptic wildfires and the announcement of David Legates’ appointment is mind-boggling,” Jane Lubchenco, who served as NOAA administrator under President Barack Obama, told the Post. “Just at the time when we need continued truth from the nation’s lead climate agency, a climate denier is hired. This is a travesty.”

In his new role, Lubchenco warned, Legates will “be in a position to squelch the free flow of accurate scientific information to the public, to distort or manipulate scientific findings, curtail monitoring and research, and create an overall chilling atmosphere for the high-quality science and scientists that the nation needs.”

Other examples of Legates’ work include a 2007 paper—partially funded by Koch Industries, the American Petroleum Institute, and ExxonMobil—which questioned whether the climate crisis is destroying polar bears’ habitats as temperatures in the Arctic rise twice as fast as the global average, and sea ice vanishes at a rate of 4% per decade.

Along with former Alaska Gov. Sarah Palin, Legates spoke in 2016 at a panel discussion on Capitol Hill—when both chambers of Congress were controlled by Republicans—about the documentary “Climate Hustle,” which called into question the existence of the scientific consensus regarding human-caused climate change. The panel addressed the question: “Are [scientists] trying to control the climate…or you?”

Brian Kahn, managing editor of Earther, tweeted about a talk Legates gave at the Conservative Political Action Conference (CPAC) in 2018 in which the professor posited that the heating of the planet holds benefit for humans and wildlife, such as the growth of larger crabs.

NOAA just hired David Legates, a man who has legitimately said with a straight face that climate change is fine because it's making crabs bigger https://t.co/sS9C1rfor9

Anyways, here's the crab love CO2 slide from when he gave the talk at CPAC. This man is being paid with the public's money https://t.co/VJ6w3SIaxI pic.twitter.com/Qxyjl5osIA

Legates’ presentation was a “total cesspool of misinformation about how carbon dioxide is good, actually,” tweeted Kahn.

“He’s not just in left field—he’s not even near the ballpark,” Lubchenco told NPR.