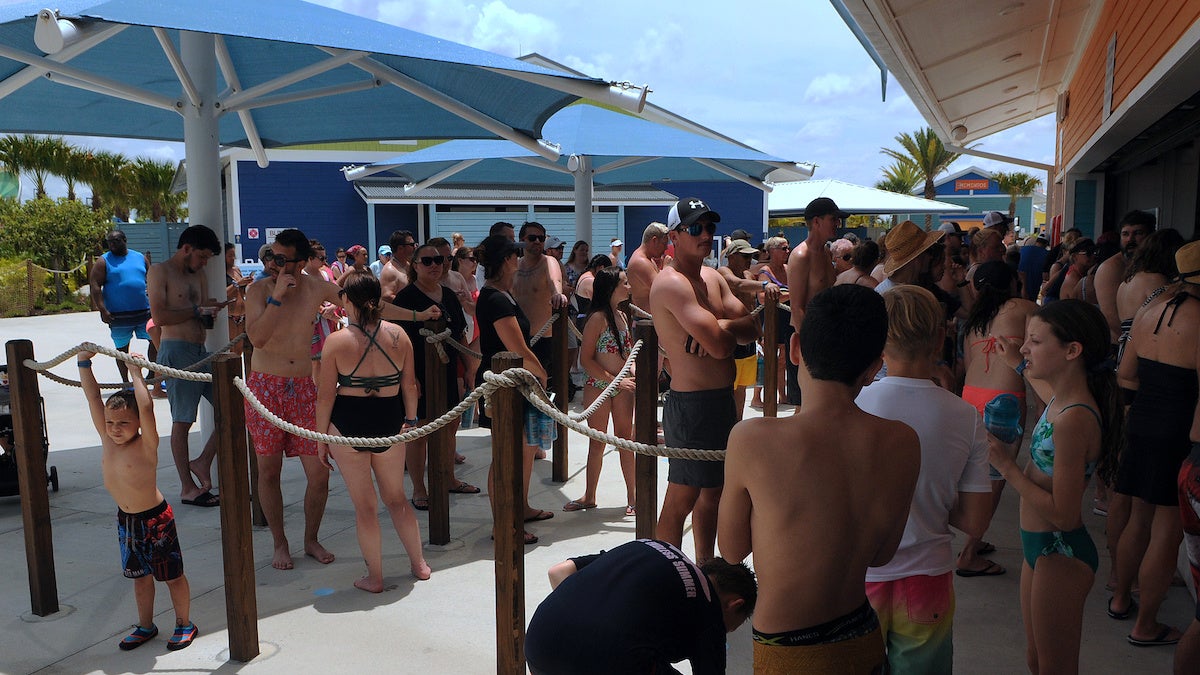 People wait in a queue at a snack bar at Island H2O Live! water park in Kissimmee, Florida on May 23 as the attraction reopens for Memorial Day weekend after closing for the coronavirus pandemic. Paul Hennessy / SOPA Images / LightRocket via Getty Images

Viral images of thousands of people eschewing the recommendations of medical experts and epidemiologists were on full display in the U.S. over Memorial Day weekend. In Missouri, St. Louis County officials called the images of crowds gathered at pool parties at bars and yacht clubs in the Lake of the Ozarks an “international example of bad judgment,” according to The Washington Post.

“This reckless behavior endangers countless people and risks setting us back substantially from the progress we have made in slowing the spread of COVID-19,” County Executive Dr. Sam Page said in a statement, as CNN reported.

That was just one example of how a global pandemic that has claimed the lives of nearly 100,000 Americans has not stopped beachgoers and sun seekers from sacrificing public health for a little pleasure. Despite pleas from health officials and politicians, crowds flocked to certain areas, making the scene look like Memorial Day in any other year, as CNN reported.

“My family has the same mindset as me and we kind of just agreed that if we get it, we get it. We’re going to handle it as a family and get over it,” one beachgoer in Gulf Shores, Alabama told CNN.

Organizers called off an event called Orlando Invades Daytona, yet thousands still flocked to Daytona Beach and danced together on the streets. Aerial footage showed people tightly packed together eschewing any recommendations of safe social distancing.

“It looks like there are two people out the sunroof throwing money,” a seemingly perplexed pilot of a police helicopter said over his radio as he flew over the wild scene near the beach to get a closer look, according to The Washington Post. “They’re clearly throwing cash at the crowd.”

In rural North Carolina, thousands packed the stands and sat shoulder to shoulder at Ace Speedway on its opening night, where face masks were difficult to spot, as The Washington Post reported. That flouted the governor’s mandate that restricts gatherings to 25 people. Alamance County Sheriff Terry Johnson said he refused to “enforce an unconstitutional law,” allowing the speedway’s opening night to proceed as planned on Saturday night, according to WTVD, an ABC News affiliate in North Carolina.

In Ocean City, Maryland throngs of beachgoers crowded on to the boardwalk.

“What I was surprised at was the amount of people that weren’t wearing their masks or weren’t social distancing,” said Lauren Dixon, who owns a condominium in Ocean City to The Baltimore Sun. “They congregated without masks. I was surprised to see that many people. I understand people wanting to get out. But they need to do physical distancing and wear their masks.”

She added that she favors police fining people who violate social distancing orders and who do not wear face masks.

“But how are you going to have police everywhere?” she said to The Baltimore Sun. “You would want to regulate common sense. But you can’t.”

Similarly, Dr. Deborah Birx, coordinator of the White House coronavirus task force, expressed concern about scenes of people crowding together over the weekend. She also asked for people to use their common sense.

“We really want to be clear all the time that social distancing is absolutely critical. And if you can’t social distance and you’re outside, you must wear a mask,” she said on ABC’s “This Week,” as The Baltimore Sun reported.