By Robert McSweeney and Rosamund Pearce

For the next two weeks, thousands of negotiators, policymakers, researchers, journalists and campaigners are gathering in Bonn for the 23rd Conference of the Parties (COP23).

The talks—hosted by Fiji, but held in Germany—are the next installment of UNFCCC international climate negotiations, following on from the landmark Paris agreement at COP21 in 2015 and the steps taken towards implementation at COP22 in Marrakech last year.

Carbon Brief dives into the data to find out how many people each country has sent to Bonn—and the gender balance of each delegation.

In addition, there are a further 6,176 attendees representing UN bodies, specialized agencies, and intergovernmental and non-governmental organizations (NGOs), plus 1,633 journalists covering the talks. This puts the total number of delegates at just more than 19,000—approximately half the number that went to COP21.

Carbon Brief’s analysis of the provisional list shows that the largest party delegations come from Africa—in fact, the whole top five of our list are African countries.

In first place is Côte d’Ivoire with 492 participants; a delegation that is 137 people larger than the second-placed country, Guinea (355 people). It’s second place again for Guinea, whose 398-strong delegation was only smaller than Morocco’s (439) at COP21 in Paris.

The highest-placed European country is Germany in sixth with 230 participants—perhaps unsurprising considering the talks are being held in Bonn.

Other European parties with sizeable delegations include France (177), Poland (77) and the European Union (76). The UK comes someway down the list with 45, which is the average delegation size across the 196 parties attending Bonn.

Despite President Donald Trump’s intention to withdraw the U.S. from the Paris agreement, the U.S. has still sent 48 delegates to Bonn. Though this is less than half the number present at COP21 in Paris in 2015. In contrast, neighbors Canada has a team of 161.

Other prominent CO2 emitters also have large delegations, including Indonesia (158), Brazil (128), Japan (109), China (82) and Russia (71). It’s also worth noting that some countries allocate some of their party badges to NGOs, which can artificially inflate the size of their official delegation.

You can explore the delegation sizes across all the countries represented at COP23 in the map below. The darker the shading, the more delegates that country has brought along. Mouse over the countries to see the number of delegates and the population size.

The full list of participants and party delegation sizes can be found here.

Note: This data is based on the number of people who had registered for the talks by the end of October this year. The UNFCCC will publish a final list at the end of the COP. Our analysis is based on named participants only, which account for 8,795 people out of a total of 11,306. As Carbon Brief discovered in our analysis of delegates to COP21, the UNFCCC does not provide details of some “party overflow” delegates. 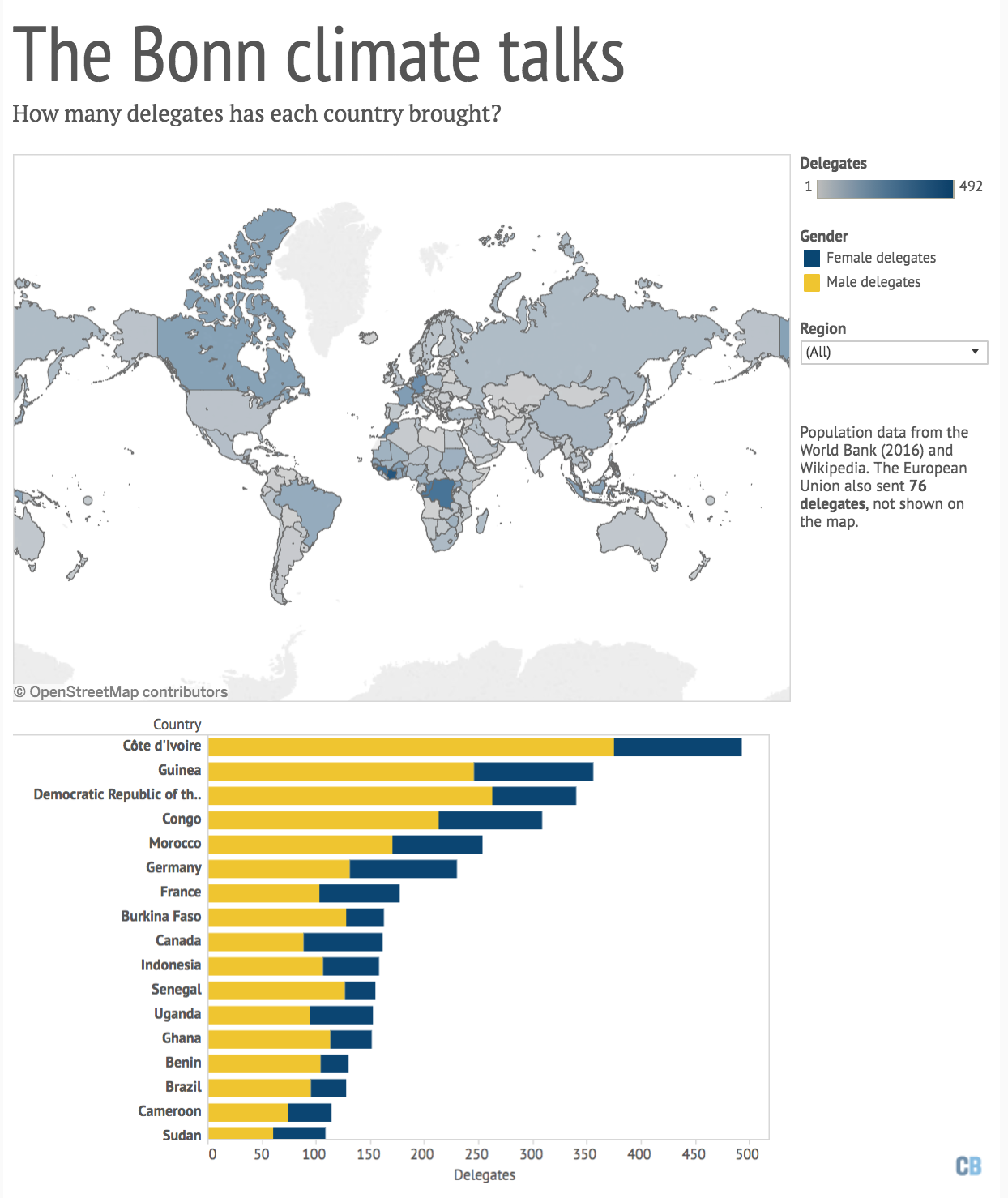 As the UNFCCC’s list provides the full name of each participant, it’s possible to work out the balance of men to women that each country is sending to Bonn. On average, party delegations at this year’s COP are 62 percent male to 38 percent female

Eritrea, Turkmenistan and Uzbekistan also have all-male delegations, but these three countries have only sent one person to the talks. The Vatican (six delegates) has also sent only male representatives, but the Vatican is only present at the negotiations as an “Observer State” rather than a party.