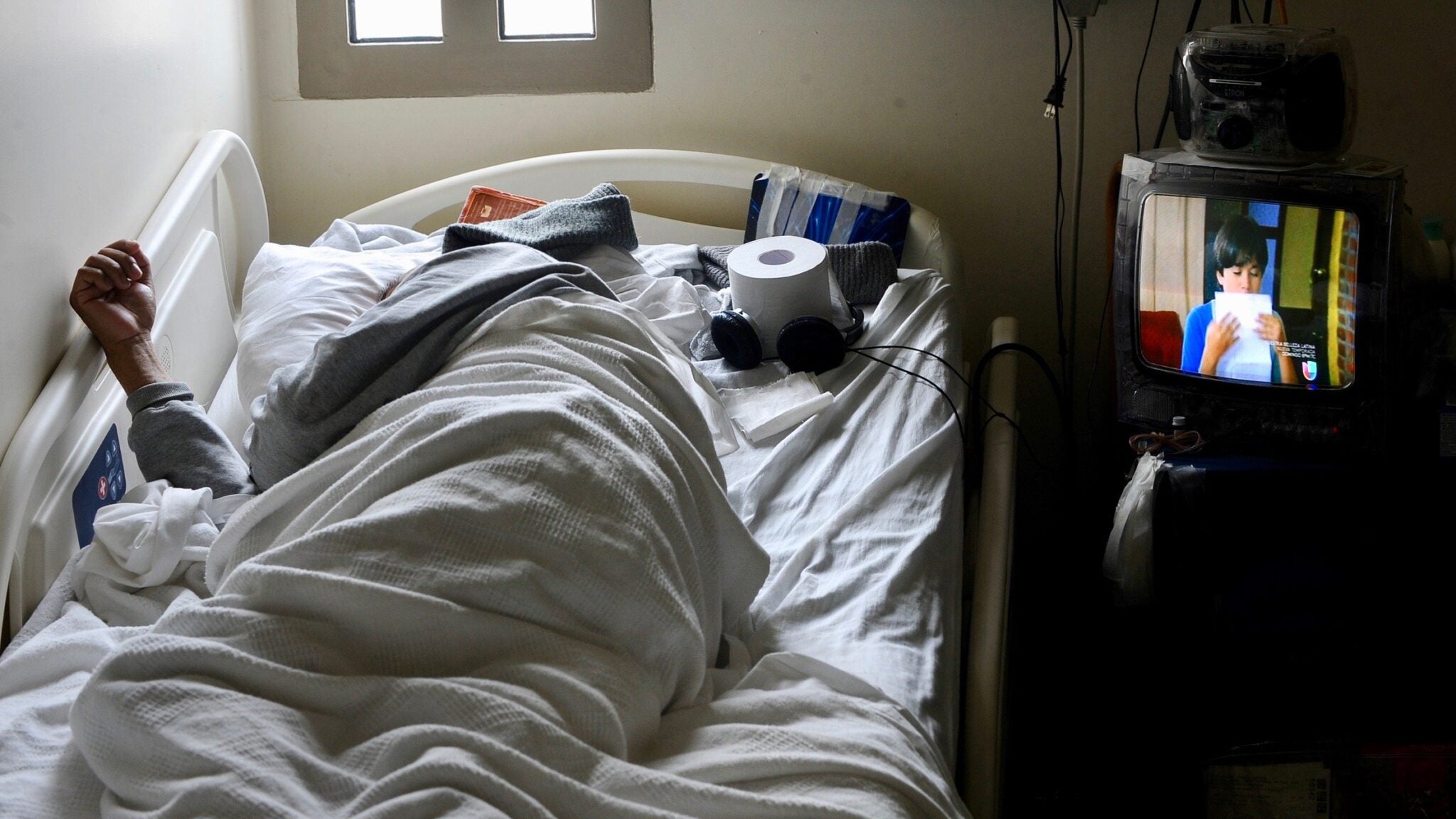 An inmate sleeps in his cell at the California Health Care Facility at the new Stockton prison in February 2014. Wally Skalij / Los Angeles Times / Getty Images

Prisoners’ rights advocates are warning that the coronavirus outbreak in the U.S. may soon have dire implications for the 2.2 million people living in the American penal system, as prison officials across the country shared little about their plans to keep inmates safe and many of the precautions Americans are being advised to take are unavailable in detention facilities.

In California, according to the Los Angeles Times, administrators in the state’s prison system say they are basing contingency plans on those already in place for inmates who contract influenza, which call for “isolation zones” created by placing tape on floors but still allow for sick inmates to share toilets with those who are well.

“Unfortunately, given the volume of incarcerated people in America, the conditions under which they are detained, and the current spread of the COVID-19 coronavirus, there is every reason to question whether American detention facilities, as a whole, are up to this challenge,” National Association of Criminal Defense Lawyers President Nina J. Ginsberg said in a statement last week.

In New York City, where at least 36 coronavirus cases have been reported, the Federal Defenders of New York are calling on the federal Bureau of Prisons to release plans to test inmates for coronavirus and treat people who contract the virus. According to Gothamist, the Bureau — which oversees two large prisons in the city — has yet to respond.

Across the country, coronavirus is already having an impact on the criminal legal system. Incarcerated people are uniquely vulnerable to disease, and substandard conditions in jails, prisons, and other facilities could help spread the coronavirus in the weeks to come.

With hundreds and sometimes thousands of inmates living in close quarters with healthcare that experts have found to be deeply inadequate, detention facilities could quickly become dangerous for inmates and staff if the virus enters a facility from outside, which, as Maria Morris of the ACLU’s National Prison Project wrote this week, is more likely than some might realize.

“Although people often think of prisons and jails as closed environments, they are not. Medical staff, correctional staff, and visitors come from the community into the facilities every day and then return home,” wrote Morris in an op-ed. “There is ample opportunity for a virus to enter a prison or jail, and for it to go back out into the community.”

“Even where people are housed in cells, the ventilation is often inadequate,” added Morris. “People in prisons and jails are often denied adequate soap and cleaning supplies, making infection control nearly impossible.”

While Americans are being advised by the CDC to wash their hands frequently and use alcohol-based hand sanitizer to avoid spreading COVID-19 facilities like the Metropolitan Detention Center in Brooklyn is not equipped with soap or hand sanitizer for inmates to use, as MSNBC anchor Chris Hayes tweeted on Saturday.

Got a dispatch today from someone that visited the the MDC Federal Prison in Brooklyn where there was ***no hand sanitizer or soap*** and a guard begged the visitor to send word that they are in danger if the virus hits the facility.

“It seems crazy that, given the risk of people chugging hand sanitizer or the risk of viral outbreak, they’d err on the side of not having sanitizer,” Patton told Gothamist.

On Monday Gov. Andrew Cuomo announced the state would be producing its own hand sanitizer to combat shortages and price-gouging—with nearly 100 inmates at Great Meadow Correctional Facility in Washington County contracted to make the product. Prisoners in the state earn an average of 65 cents per hour.

“This is nothing less than slave labor and it must end,” said Tina Luongo and Adriene Holder, attorneys for Legal Aid Society, said in a joint statement. “It would be even more shocking if prisons and jails were to deem this…product ‘contraband’ and deprive incarcerated New Yorkers from possessing effective hand sanitizer because of the alcohol content. The same individuals who produce this product should not be prohibited from using it.”

In Italy, the country with the second-most coronavirus cases after China, at least seven inmates have died as unrest and protests exploded in the prison system after officials imposed visiting restrictions. To contain the spread of the coronavirus, Iranian officials said Monday they would release 70,000 prisoners on furlough to prevent an outbreak in the country’s detention facilities. The decision came after the number of reported cases nearly doubled in the country over the weekend.

At the Prison Policy Initiative, Peter Wagner and Emily Widra on Friday shared examples of “common sense policies” which could slow the spread of the virus among the prison population, including:

Every plan to combat a public health epidemic must include “a commitment to continue finding ways…to minimize the number of confined people and to improve conditions for those who are incarcerated, both in anticipation of the next pandemic and in recognition of the every day public health impact of incarceration,” Wagner and Widra wrote.

“The real question,” they added, “is whether the criminal justice system and the political system to which it is accountable are willing to make hard decisions in the face of this potential pandemic, in the face of the one that will eventually follow, and in the context of the many public health costs of our current system of extreme punishment and over-incarceration.”