How Native and White Communities Make Alliances to Protect the Earth 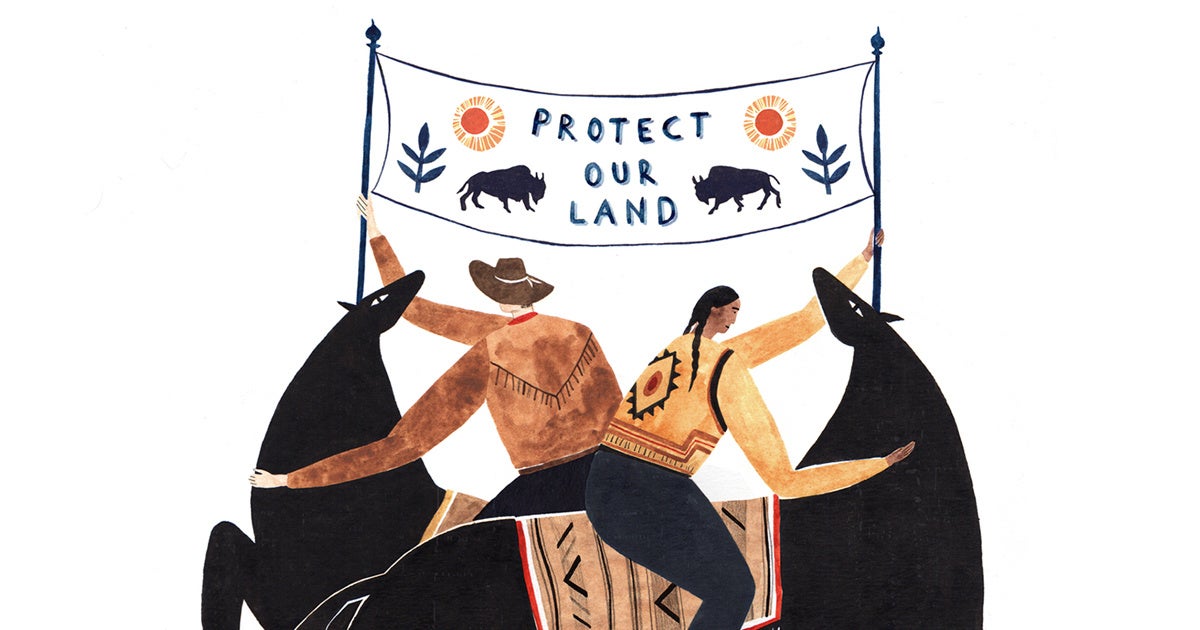 Resistance to the North Dakota Access Pipeline at Standing Rock brought greater media and public attention to Native peoples and our struggles with environmental injustice. It also provided a means for the public to express fears over the environmental threats posed to the Earth by unchecked corporate and governmental exploitation of fossil fuels.

Native Americans, however, have been hollering for generations about the global impact of fossil fuels and the poisoning of water, land, and fish from mining, industrial farming and industry to anybody who would listen. Native folks knew that eventually non-Indigenous people would hear them and realize that no one is immune to the fallout from the colonialism and corporate greed that drives so much of our economy with little concern for the planet’s health.

As Philip Deere, a Muskogee spiritual leader, said back in 1981, “The time is coming. Multinational corporations don’t care what color you are; they’re going to step on you. They’re going to slap you in the face like they did the Indians.”

That time has clearly arrived for many non-Natives in the U.S. “Looks like we’re all Indians now, heh?” says Mohawk scholar Taiaiake Alfred in Unlikely Alliances: Native Nations and White Communities Join to Defend Rural Lands, a new book by Zoltán Grossman, professor of geography and Native studies at the Evergreen State College. Grossman’s stated aim for the book is to illuminate how populist movements can be created across historical and cultural divides to address our common human environmental predicament.

In the traditional Native worldview, the land, water, and wildlife are members of the community with equal standing to humans; they warrant the same care that we would extend to other members of our families.

For most Americans, the process of working and surviving in the modern world requires a philosophical and emotional disconnect from nature. But like all humans, they are hardwired to love and care for family and the planet, their home. Given the right circumstances of inclusion and support, people can’t resist expressing their love and concern for this greatest of all relatives, our Earth.

In the tradition of a Western-based worldview, people, especially academics, construct pathologies and syndromes to objectify and compartmentalize our humanness. For instance, I recall reading an article in The New York Times Magazine called, Is There an Ecological Unconscious? The author wrote about a newly discovered psychological condition called “solastalgia” to describe the “pain experienced when there is recognition that the place where one resides and that one loves is under immediate assault.” The author noted that this condition is well-known among Indigenous communities that have been displaced from their lands, and that this “place pathology” might not be limited to Native peoples. Non-Indigenous people, e.g., modern middle- and upper-class White folks, might actually feel it too! I immediately sensed that all the Indians reading this had to be doing a collective eye roll while voicing an exasperated, “Duh, ya think?”

Fortunately, Grossman doesn’t fall into this trap; he describes the history and evolution of Native and non-Native alliances both in sociological and historical terms, but also as Indigenous-led research. By treating interviewees as “primary documents,” he forwards an elegant means of legitimizing and valuing oral history as a valid scientific source.

As a journalist, I covered several of the events cited in the book, including Standing Rock, the spearfishing wars and violent anti-treaty protests of the 1980s in northern Wisconsin, the successful shutdown of the Crandon mine, and the Penokee taconite mine protest during this century.

When Wisconsin Ojibwe decided to exercise their treaty rights to fish outside of reservation boundaries, White sportfishers claimed that Indian fishing, especially the practice of spearfishing, would threaten the habitat and ecosystem of fish and compromise the associated tourism economy. The conflict soon gave rise to an often-­violent anti-treaty movement and openly racist anti-Indian sentiments. It was a tough time to be an Ojibwe journalist in northern Wisconsin. In my work as a staff photographer for the Green Bay Press-Gazette, it was nearly impossible for me to travel alone in certain parts of the state; I was denied service at gas stations and restaurants, taunted with calls of “timber n*&ger,” “welfare warrior” and others. People who gathered at lakes to protest Indian fishing threw rocks, bottles, and beer cans at Indians and the media; I was targeted on two counts!

Local White anti-treaty protesters founded Protect American’s Rights and Resources and Stop Treaty Abuse and unified under a national anti-treaty coalition, Citizens Equal Rights Alliance. Their arguments were based on the themes of equal rights, environmental protection, and protecting the local tourism-based economy. Protesters advocated for “equal rights” for Whites and opposed “special rights” given to Indians through treaties.

Remarkably, however, an alliance later grew in the region between Natives and non-Natives as people faced a much farther-reaching threat to fish, environment and water—mining.

Grossman quotes Red Cliff Ojibwe activist Walt Bresette, who predicted during the fishing wars that non-Native Northerners would soon realize that mercury and toxic waste from mining, in addition to state mismanagement of fisheries, are “more of a threat to their lifestyle than Indians who go out and spearfish.”

Native and non-Native community members and environmental groups joined together to protest the mine. In a delicious irony, it was tribal treaty rights to hunting and gathering and Mole Lake’s tribal sovereignty to create their own clean water and air standards that won the fight to defeat the mine.

In 1997, Native and non-Native groups worked to pass the Wisconsin Sulfide Mining Moratorium Bill forcing mining companies to “prove it first” by showing examples of sulfide mines that had operated and been reclaimed without violating environmental laws. In 2003, the Mole Lake Sokaogon and Forest County Potawatomi bought the land containing the proposed mining site. As a result, Grossman notes, the mining industry regarded Wisconsin as the most mining-averse state in the country.

That is, until Scott Walker was elected governor in 2010. Republican Walker helped fast-track a mining deregulation bill that was partially drafted by lobbyists for Gogebic Taconite, a company proposing a huge taconite (low-grade iron ore) mine directly over the Great Northern Divide in the Penokee Mountains near the Bad River Reservation. Waste products from the high-sulfide mine would flow directly into the Bad River watershed and Lake Superior, the largest freshwater lake in the world.

Although the mine was presented as an employment generator for the economically strapped region, many non-Natives privately expressed concerns about threats to the environment. Native people and allies helped embolden non-Native residents and county board members to express their opposition to the mine.

Natives and allies built the Penokee Hills Harvest Camp, a demonstration site showing the economic potential and cultural and environmental significance of land near the proposed mine.

Paul DeMain, co-founder of the Harvest Camp, declared that a new tribe, the “water tribe,” had emerged as a result of Natives and allies organizing around the mine issue. “Enrollment requirements are simple; members have to prove they are comprised of at least 60 percent water,” he said. Soon the element that unifies all life became the binding force behind opposition to the mine.

During those days, I attended a public meeting in the town of Hurley, a longtime pro-mining, anti-Indian community. As I reported for Indian Country Today media network at the time, several people spoke of how the mining issue had helped them get to know their Native neighbors and overcome long-held perceptions about them. For instance, Aileen Potter described how she was taught to fear Native people as a child. “My dad used to tell us to duck down in the car when we approached the Bad River reservation,” she recalled.

Visiting the Harvest Camp and learning about how Ojibwe people use traditional plants helped Potter change her view of Native peoples and the potential impact of the mine.

“It was scary for me to go out there. I was nervous but Mel [Gaspar, camp leader and member of the Lac Courte Oreilles Ojibwe tribe] greeted me at the camp entrance and asked if I’d come to learn about what was going on there,” she told me.

Subsequently, Potter began sharing her newfound information with neighbors and friends, but noted that many feared retaliation by others in the non-Native community if they spoke out against the mine.

In March 2015, Gogebic Taconite announced it was halting plans to build the mine.

The mining debate helped create new and surprising alliances between tribal groups and local citizens as non-Natives learned about the real human cost of the mine. Even the Ashland County board, longtime mining supporters, created mining regulations for the community to address problems, such as noise, dust, and damage to local roads.

As Grossman reminds us eloquently, unlikely alliances between disparate groups have to begin from the ground up. Such relationships can’t be mandated or orchestrated from above by governments or by upper-middle-class membership groups. Superbly authentic and often messy, genuine human communities have to emerge organically.

I recall a conversation I had with my cousin Annie Maday about the mining controversy. “The White people live here for the same reason we do; they love this place,” she said. “We just gave them a way to express that love.”