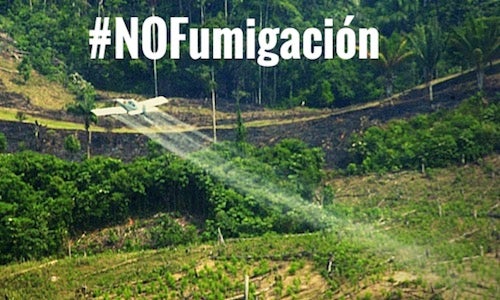 A government official in Colombia announced that the country will once again use the controversial herbicide glyphosate to destroy illegal coca plantations, the crop used to make cocaine.

Colombia to resume use of glyphosate in drug war a year after chemical's ban. I wonder who is behind reversal? @AP https://t.co/wHtOdWlM2Z

But instead of aerial fumigation by American-piloted crop dusters, glyphosate will be applied manually by eradication crews on the ground, the Associated Press reported.

“We’ll do it in a way that doesn’t contaminate, which is the same way it’s applied in any normal agricultural project,” Defense Minister Luis Carlos Villegas told La FM radio.

The move is a sharp turn from President Juan Manuel Santos’ decision less than a year ago to suspend glyphosate due to the weedkiller’s infamous link to cancer.

“I am going to ask the government officials in the National Drug Council at their next meeting to suspend glyphosate spraying of illicit cultivations,” Santos said last May.

“The recommendations and studies reviewed by the Ministry of Health show clearly that yes, this risk exists,” he added, referring to The World Health Organization’s International Agency for Research on Cancer’s (IARC) classification of glyphosate as “probably carcinogenic.”

Following the decision to end aerial spraying, the United Nations’ Office on Drugs and Crime reported a sharp increase in Colombian coca cultivation. The report said:

The net coca cultivation area was up 44 percent year-on-year from 48,000 hectares in 2013 to 69,000 a year later, while the potential cocaine production, in turn, rose from 290 to 442 metric tons in the same period representing a 52 percent increase.

Villegas did not explain why the government reversed its stance, however he pointed out that increased coca production would affect the entire cocaine supply chain in Colombia and abroad.

Colombia is the largest supplier of cocaine to the U.S. and the spraying program was part of a two-decade long antidrug campaign backed by the U.S. to destroy the cultivation of coca. About 4.32 million acres have been sprayed since 1994 when test fumigations began, Newsweek reported. 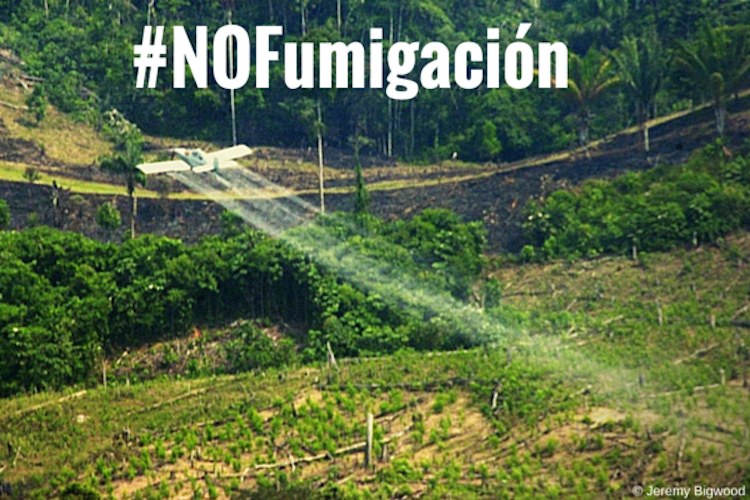 A Change.org campaign was initiated to suspend aerial spraying with glyphosate and other harmful chemicals in Colombia. Photo credit: Jeremy Bigwood/AIDA

However, as Newsweek pointed out, critics called the program a disaster:

The people have been “sprayed like cockroaches” says Noel Amilcar Chapuez Guevara, governor of the council of Awa Tatchan, one of the many indigenous farming communities in Putumayo.

Often, wind would carry the pesticides to neighboring Ecuador, which eventually filed a lawsuit at the International Court of Justice in the Hague, arguing that the sprayings had caused serious damage to people, crops, animals and the environment. In 2013, the case was settled out of court for $15 million. But Colombia’s citizens and victims have never seen a single peso for the damage done by the fumigations.

According to the Associated Press “the ban was heralded by leftists and members of the Revolutionary Armed Forces of Colombia who have long compared the program to the United States’ use of Agent Orange in Vietnam.”

Glyphosate is used in products such as Monsanto’s Roundup. The agritech giant has repeatedly insisted on the safety of their flagship product that’s also the world’s most widely used herbicide.

Experts insisted to the Associated Press that the better method to eradicate illegal coca is one that’s already in place where workers pull up coca bushes by the roots to ensure plants can’t grow back. The government has been promising to scale up this approach.

Meanwhile, glyphosate made another set of overseas headlines last week. Reuters reported that a European Parliament motion supported renewal for seven years instead of 15 and urged a ban on non-professional use, as well as in and around public parks and playgrounds.

Given concerns about the carcinogenicity and endocrine disruptive properties of the herbicide glyphosate, used in many farm and garden applications, the EU Commission should renew its marketing approval for just 7 years, instead of 15, and for professional uses only, Parliament says in a resolution voted on Wednesday. MEPs call for an independent review and the publication of all the scientific evidence that the European Food Safety Authority (EFSA) used to assess glyphosate.

Glyphosate use is opposed by some EU member states such as France, Sweden, Italy and the Netherlands. Britain and Germany reportedly are in favor of its use.

Europe votes to withdraw approval of carcinogenic #glyphosate in public places and to remove it from public sale https://t.co/YcYyXdz88i