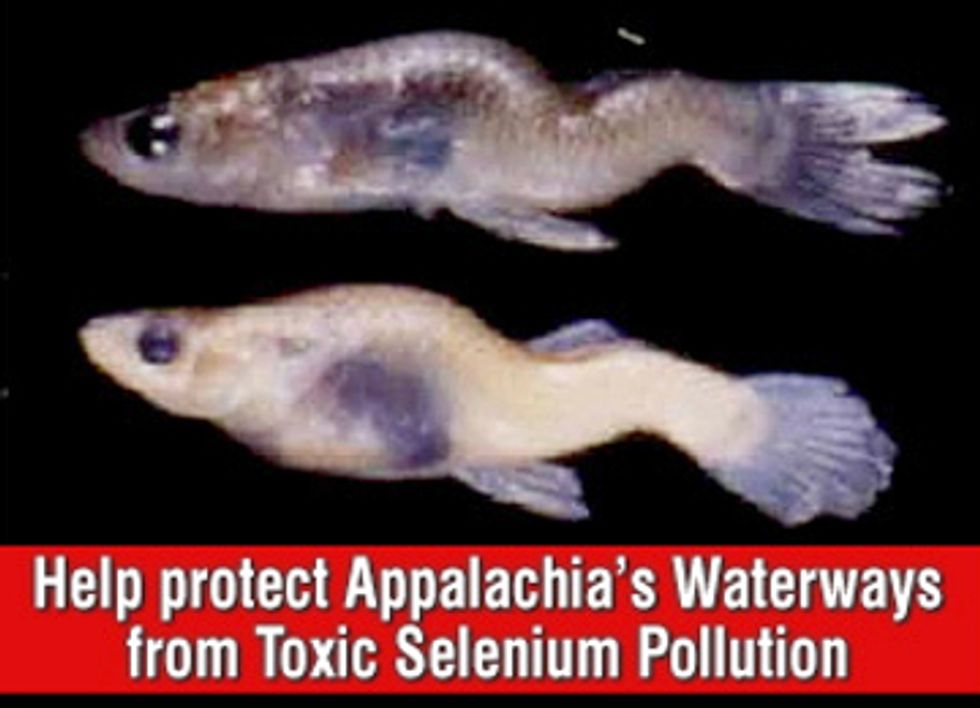 In February, Appalachian Voices wrote about the new selenium water quality standards being proposed by the Kentucky Division of Water and urged concerned citizens to express their concern to the state.

Now, Kentucky has gone ahead with its proposal, submitting the new standards to the U.S. Environmental Protection Agency (EPA) for review. While the EPA may deny Kentucky’s proposed standards, concerns are growing that the EPA, influenced by states beholden to their mining industries, may release its own inadequate standard.

Selenium is of particular concern in Kentucky and other Central Appalachian states because it is often released into streams through mountaintop removal coal mining and is toxic to aquatic life at very low levels. Even though many high-selenium coal seams are mined in Kentucky, companies typically claim there will be no selenium discharge when first applying for a permit, so that the pollutant is not included on the permit.

Selenium has rarely been included on mining permits in Central Appalachia, effectively allowing companies to avoid monitoring or treating it, unless citizens force them to with lawsuits. A recent victory in a lawsuit over illegal selenium discharges from a Virginia surface mining operation indicates that selenium pollution is a widespread problem at mountaintop removal mines across Central Appalachia.

Kentucky has faced increased pressure from citizens and the EPA to include selenium standards on pollution discharge permits, so that water quality is adequately protected. Unfortunately for the coal companies, selenium is expensive to treat and difficult to keep out of streams impacted by surface mining in high-selenium coal seams. Adding selenium to permits would mean that many coal companies have to start paying for a much larger portion of the damage they create.

These blue gills were collected below the site of TVA’s 2008 Kingston Coal Ash spill. These fish have “pop-eye”, a deformity caused by selenium pollution causing their eyes bulge out of their heads. These fish had selenium levels of 2.5-6.5ppm, well below Kentucky’s newly proposed standard of 8.6 ppm for fish tissue. Photo courtesy of Appalachian Voices

It appears that the state is helping coal companies find a way to avoid responsibility for selenium discharges. By increasing the legal limit of selenium allowed in streams and including fish tissue-based standards that are difficult, if not impossible to enforce, the state will allow many companies to continue to skirt their responsibility to the land and the people of Kentucky.

The Kentucky Division of Water has proposed to increase the acute selenium standard from 20 parts per billion (ppb) in water to 258 ppb in water, and the chronic standard from 5 ppb in water to 8.6 parts per million (ppm) in fish tissue. Not only is the state increasing the legal level of selenium in streams, but they are also moving to a fish tissue standard that may be unenforceable.

Selenium bioaccumulates in aquatic life, meaning that even at low water concentrations, it builds up in fish, leading to deformities and reproductive failures. Companies will not be required to monitor fish tissue on a regular basis, unless selenium reaches a certain threshold in the stream—by then, fish may have already been killed off by selenium, or by a host of other pollutants common below mines.

If there are no fish to test, the chronic standard can’t be violated, right? Even if some fish are still available for testing, if they already have a high level of selenium, it may be too late to reverse the damage, especially in sensitive species such as blue gill and catfish.

The EPA has been moving slowly toward publishing selenium standards of its own, since it withdrew its 2004-2005 standards after misinterpreting key scientific research. Because of the delay, the EPA informed states that they may create their own standards, if supported by science. Other states are taking Kentucky’s lead on selenium pollution—West Virginia has recently moved to change its selenium standards as well. The same issues with selenium have been occurring with mining in western states.

Selenium is becoming a pollutant of national concern. Many are worried that even if the EPA denies Kentucky’s proposed selenium standards, they may cave to pressure from the mining industry and release another set of inadequate standards, which would apply to the entire country.

If the EPA raises the allowable level of selenium in streams, it will effectively give mining companies free license to discharge excessive amounts of selenium into our waterways, and take away citizens’ ability to challenge these discharges.

As coal reserves in Central Appalachia continue to be used up and other energy sources continue to out-compete coal, it is imperative to do everything possible to prevent further damage to the land and the wildlife in Central Appalachia. Only with healthy ecosystems and healthy communities, can Kentucky hope to emerge from the changing economic landscape with a stronger and more just economy.

Tell the EPA to require strong, enforceable selenium standards in every state.

Visit EcoWatch’s COAL and BIODIVERSITY pages for more related news on this topic.