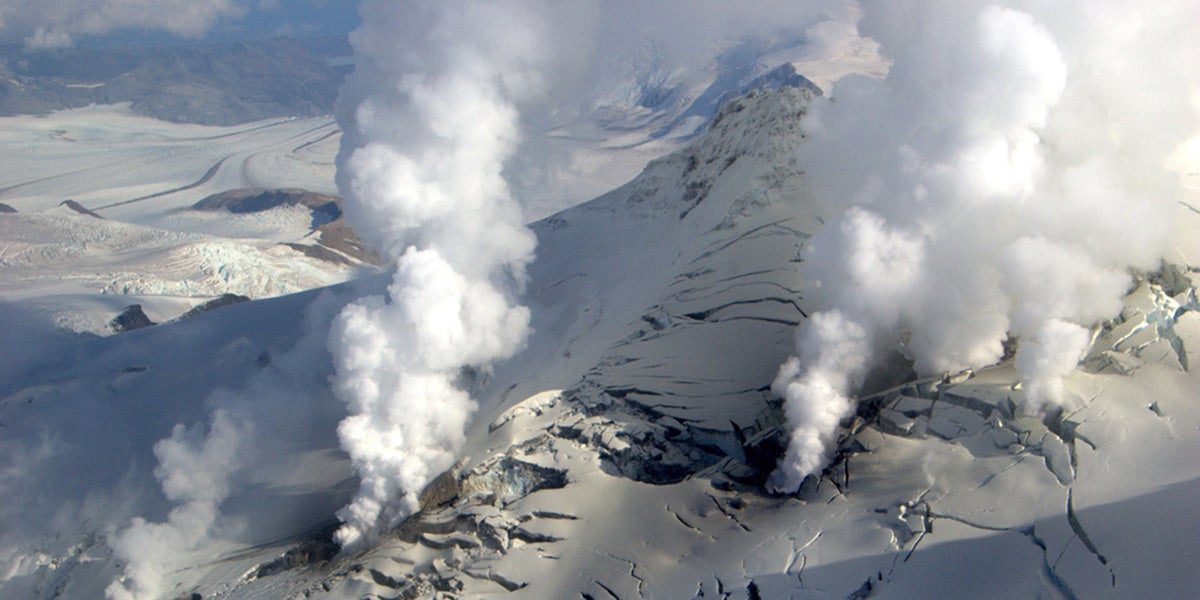 Fourpeaked volcano, Alaska, in September 2006 after being thought extinct for more than 10,000 years. Cyrus Read, USGS

We can add volcanic eruptions to the list of potential climate change hazards.

According to Roberti, glaciers give mountains stability. When they melt, that stability goes with them, leading to collapses and landslides. And lack of stability means trouble for anyone living under a volcano.

“Volcanoes are a pressurised system and if you remove pressure by ice melting and landslide, you have a problem,” Roberti told the Independent.

Roberti’s presentation focused on a case study of Mount Meager in British Columbia, Canada. The volcano saw the largest landslide in Canadian history on its south side in 2010. By 2016, volcanic gases formed ice caves in the glacier, the first time that had ever happened on the mountain.

The researchers used mathematical models to conclude that another landslide could impact the magmatic plumbing of the mountain enough to trigger an eruption.

Roberti told the Independent that this is most likely an impact of climate change.

“We see a correlation between high temperature, ice melting and landslides,” Roberti said.

If climate change does trigger more eruptions, it might offer some relief for global temperatures. According to the U.S. Geological Survey (USGS), volcanic eruptions release sulfur dioxide into the stratosphere, which leads to global cooling by converting into sulfuric acid, which condenses and forms sulfate aerosols that reflect sulfate radiation back into space. The eruption of Mount Pinatubo in 1991 cooled the planet for three years, decreasing temperatures by as much as 1.5 degrees Fahrenheit during its peak.

A National Center for Atmospheric Research study published in 2017 found that global warming could mean that future eruptions have a more severe climate impact, leading to greater cooling than before, but not enough to offset global warming.

The USGS points out that volcanoes also release carbon dioxide, and in the deep past it is possible that massive eruptions did trigger global warming. However, today the carbon impact of volcanoes is minimal next to human impacts. The 1980 eruption of Mount Saint Helens emitted 10 million tons of carbon dioxide in nine hours; humans routinely emit the same amount in 2.5 hours.

Ice-capped volcanoes aren’t the only ones vulnerable to climate change. Open University researcher Dr. David McGarvie said he didn’t think there was enough evidence yet that glacier loss would trigger eruptions, but he told the Independent that climate change had historically impacted ice-buried volcanoes in Antarctica and Iceland.

“There is more and better evidence across Iceland that when the ice sheet underwent major reduction at the end of the last glacial period, there was a large increase in both the frequency and volume of basalt erupted—with some estimates being 30 times higher than the present day,” he said, though he said current ice melting was not at the same scale.