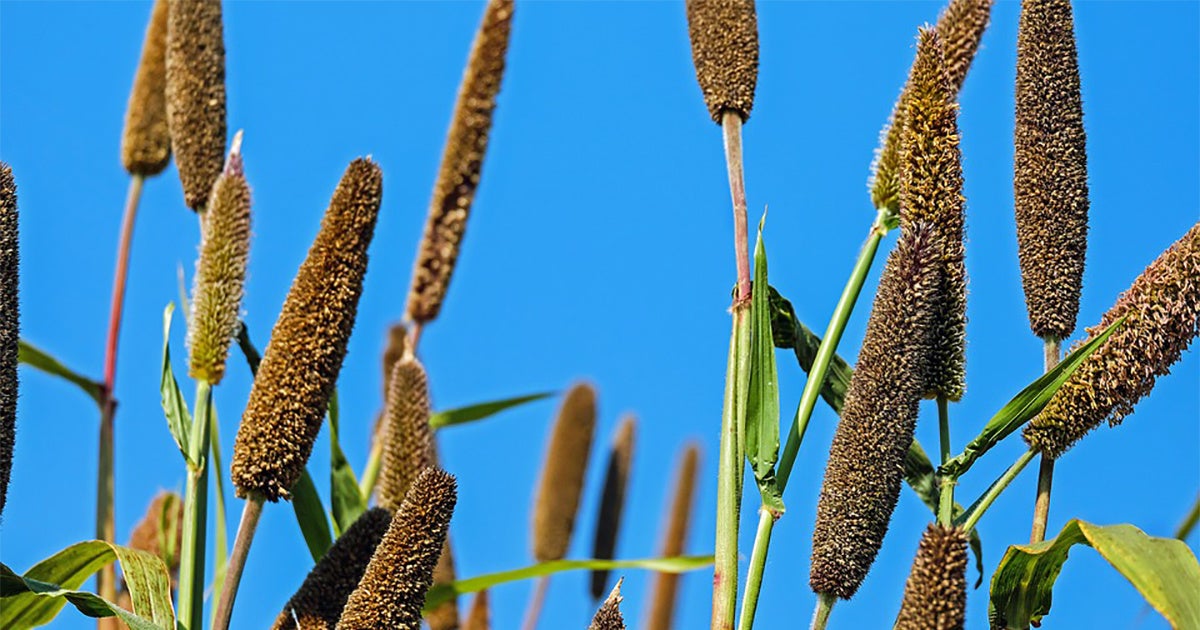 Millets are a staple crop for tens of millions of people throughout Asia and Africa. Known as Smart Food, millets are gluten-free, and an excellent source of protein, calcium, iron, zinc and dietary fiber. They can also be a better choice for farmers and the planet, requiring 30 percent less water than maize, 70 percent less water than rice, and can be grown with fewer expensive inputs, demanding little or no fertilizers and pesticides.

Despite these benefits, millets have fallen out of favor in recent decades, often being perceived as a low-value crop for the poor. Research and development money has mostly been dedicated to rice, maize and wheat, and consequently, those crops became symbols of socio-economic improvement. Markets and supply chains developed to support them, consumers sought to eat them, and farmers were encouraged to grow them.

This perception is beginning to shift, however. In India, the federal government has declared 2018 as the National Year of Millets. Leading the way in shifting public perception are innovative chefs who recognize the nutritional and environmental benefits of millets, and are incorporating them into their menus to champion local agricultural diversity, experiment with new ingredients, and celebrate culinary traditions.

Food Tank is highlighting 10 chefs who are drawing from these traditional grains to inspire culinary innovations, transforming “old-fashioned” millets into foods for the future.

Ahaar Kuteer is an all-millet restaurant in Begumpet, Hyderabad. After 10 years in the IT industry, Sri Ram made a dramatic career change, founding the city’s first eatery to focus primarily on millets, and is passionate about inspiring healthy diets by promoting millets as a better grain choice. Ahaar Kuteer is now a popular spot with vegans and health-conscious eaters, serving up millet-centric breakfasts, lunches, and dinners.

For chef and culinary entrepreneur Sabyasachi Gorai, the resurgence of millets will be more than just another trend. Gorai believes that their nutritional advantages and role in preserving India’s agricultural biodiversity will cement millets in the culinary mainstream as flavorful and versatile ingredients. Signature Chef Saby dishes, like black olive millet risotto and millet cranberry laddoo are popularizing millets as a healthy and delicious grain alternative.

Prateek Sadhu is head chef at Masque, a Mumbai farm-to-fork restaurant that has made waves in the city’s culinary scene since opening in 2016. Chef Sadhu’s talent and creativity in the kitchen is apparent as he utilizes a dizzying variety of unusual, but always in-season ingredients for Masque’s menu, which changes every two weeks. He believes in promoting the variety and versatility of local crops like millets, showing how they are suitable for nearly any setting, from traditional home-cooking to experimental fine-dining.

Surendra (Sunny) Gandharva and Manoj (Manu) Prajapat, are big fans of millets—the pair founded Millets of Mewar in 2011, in their hometown of Udaipur after years of cooking and promoting local, nutritious food. Millets of Mewar was a natural progression of this work, with millets being the centerpiece of a menu promoting healthy and environmentally conscious eating. The cafe also serves as a community hub, hosting artistic performances, book exchanges, and sustainability initiatives.

Pierre Thiam is arguably Senegal’s best-known chef. But more than just a chef, he has been sharing Senegalese culinary traditions with the world. Among his priorities has been to popularize fonio, a variety of millet with over 5,000 years of history in Senegalese cuisine. Thiam is currently working to bring high profile New York City chefs to Senegal, in an effort to popularize the country’s food in the West, which he hopes will result in a revitalization of native cuisine in Senegal, and preserve the diversity of traditional crops like fonio and other millet varieties with strong roots in African cultures.

N.S. Krishnamoorthi’s restaurant Prems Graama Bhojanam (PGB) is based on a simple premise: traditional, rural dishes based around millets, brought to the city of Chennai. Krishnamoorthi has decades of cooking experience, traveling through much of India for work. During his travels, he fell for the village food he often enjoyed in homes and family-run hotels, coming from food cultures still steeped in tradition and local ingredients, including millets. He brought this approach to the big city. Millets are found in every dish on the menu at PGB, and Krishnamoorthi is happy his traditional approachis catching on with the next generation, with urban young adults forming the majority of his customer base.

Millets won over baker Jonathan Bethony during a tour of an organic grain farm, just outside his hometown of Washington D.C. Bethony had come to the farm looking to source wheat for his D.C. based bakery and mill, SEYLOU, but he left with another idea in mind. Inspired by how farmer Heinz Thomet managed his land by minimizing inputs, rotating crops, and growing a variety of cereal grains, he sought to support farmers like Thomet by incorporating other local grains into his baking. He immediately challenged his pastry chef to bake with only millets for a week. They were both impressed with the results, and creations including a millet canelé and a millet chocolate chip cookie have made it permanently onto their menu. Following his millet revelation, Bethony traveled to Africa to learn more about the Millet Business Services Project, an initiative working to improve the value chain of millets in Senegal.

When renowned chef Manu Chandra opened his 13th restaurant in Mumbai in 2017, he emphasized sustainability and utilizing local, seasonal ingredients as focal points of the new venture. Millets feature front and center in Chandra’s food philosophy. He is a major proponent of the grains in India, citing their nutritional and environmental benefits, along with their versatility as an ingredient. Chandra has utilized millets in desserts, pancakes, salads, croquettes, and even featured a millet risotto bar at a large catering event.

The Bombay Canteen, located in Mumbai, has been listed as one of the world’s 50 best restaurants, known for its high-quality menu emphasizing local ingredients. Executive chef Thomas Zacharias showcases regional Indian cuisine through the use of a variety of millets. Jowar, kodo, foxtail, and proso millets all make appearances on his ever-evolving menu. Zacharias sees the variety and versatility of millets as an enormous source of inspiration and culinary innovation. Given their nutritional benefits and cultural significance in Indian cuisine, he is hopeful that many more chefs will follow suit.

Chef Ramasamy Selvaraju is turning the preconception of millets as a food for the rural poor on its head at the upscale Vivanta, in Bangalore. Six months after introducing the grains onto his menu, customers were asking for even more millet-based options. Selvaraju sees this as an indication of the shifting perceptions of the urban middle class, who are beginning to seek out millets for their nutritional advantages. The breakfast buffet at Vivanta features a sorghum millet congee, proso millet banana loaf, and kodo millet muffins, among many other millet-based options. Selvaraju has even begun conducting workshops on cooking with the traditional grains.