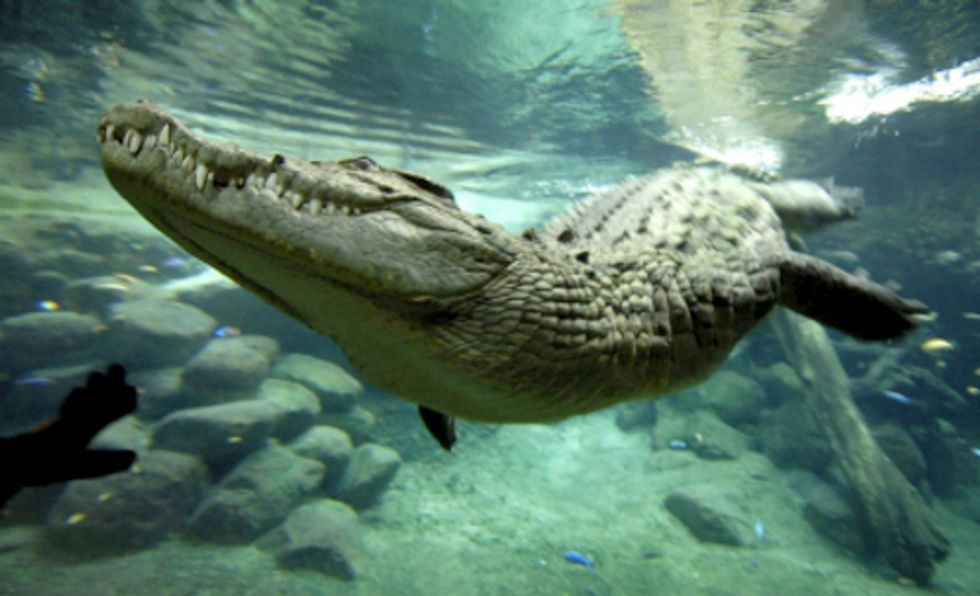 Chemicals sprayed on bananas to control pests and disease are making their way into the bodies of the emaciated crocodiles who live near banana plantations in Costa Rica, says a new study that illustrates the environmental impact of pesticide use—and gives another reason to buy organic foods, even those with inedible peels.

Crocodiles who live near Costa Rican banana plantations are sickly, and researchers suspect pesticides are either directly responsible or impacting the crocs' environment enough—by killing off or reducing their food supply—to make them ill.

As part of the conservation strategy for the species in Colombia, the Cayman crocodrilus is raised in commercial farms. Photo credit: waza.org

"The animals are very, very thin—about 50 percent thinner than those away from the plantations," said study co-author Peter Ross, an aquatic ecotoxicologist and associate professor at the University of Victoria in British Columbia, in a National Geographic story. The study found that crocodiles that live closest to the plantations had the highest concentration of pesticides in their body, and those that live further away had less.

Costa Rica is a prime location for banana production and as a key export, bananas play an important role in the nation's economy. In 2011, Costa Rica exported 2 million tons of bananas, valued at more than $700 million.

Demand for the fruit is increasing, and so is pesticide use.

Bananas, which lack the genetic diversity to fight off pests, receive some of the heaviest doses of any crop in the world. In the last two decades, pesticide use in Central America has doubled, and Costa Rica ranks second in the world for intensity of pesticide use.

Lack of infrastructure and enforcement regulating the use of these chemicals have contributed to environmental contamination in Costa Rica. The country's frequent heavy rains wash the pesticides from areas such as banana plantations into nearby waterways.

The crocodiles studied in the research are spectacled caiman, fish-eating crocodilians that inhabit freshwater habitats in tropical regions of the Americas. The authors say their results indicate that pesticide use in banana plantations is impacting a high-in-the-food-chain species inhabiting one of the most important wilderness areas in Costa Rica.

The fact that caiman are being impacted indicates other aquatic organisms are going to be affected as well, said Paul Grant, the study's lead author. "There’s fairly strong evidence that pesticides, whether it's indirect or directly, are eroding caiman habitat."

The study was published in the November issue of the journal Environmental Toxicology and Chemistry.