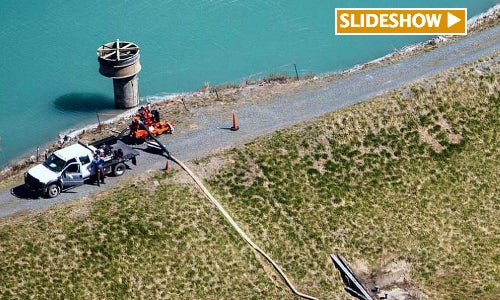 North Carolina environmental regulators have cited Duke Energy for violating the conditions of a wastewater permit after it illegally dumped an estimated 61 million gallons of coal ash wastewater into a Cape Fear River tributary, according to Waterkeeper Alliance.

The state’s Department of Environment and Natural Resources (DENR) issued the citation on Thursday for the permit violations after state officials discovered the dumping during a March 11 inspection at Duke Energy’s Cape Fear Steam Electric Plant.
[blackoutgallery id=”326556″]
Regulators said the wastewater was flushed from two large, confined lagoons and into the on-site canal that empties in an unnamed tributary, which connects with the Cape Fear River. The state agency calculated its estimate based on log books Duke Energy maintained for the pumping activities.
Waterkeeper Alliance released aerial surveillance photos taken from a fixed-wing aircraft last week catching Duke Energy workers in the act of pumping the wastewater.
“After more than a week of indecisiveness, DENR conceded that Duke’s secret pumping was indeed illegal, but yet again, DENR’s action only came after Waterkeeper Alliance and the Cape Fear Riverkeeper caught Duke in the act with aerial surveillance photos,” said Donna Lisenby, Waterkeeper Alliance’s global coal campaign coordinator. “Once again, citizens and shrewd investigative reporters had to work overtime to pick up the slack because DENR had failed to notice this egregious dumping for several months.”
The pumps and attached hoses were set up in the pair of coal ash lagoons but were not in use when state officials visited the plant last week. The pumping equipment has since been removed.
The March 11 visit to the Cape Fear plant was part of DENR’s inspections of all Duke Energy’s facilities with coal ash lagoons.
The inspections were announced in the wake of the Feb. 2 coal ash spill at the Dan River plant. The detailed information the state is gathering about each facility will factor into the state’s future decision-making with regard to all of North Carolina’s coal ash lagoons.

“Duke says it is ‘accepting full responsibility’ for the Dan River spill,” said Cape Fear Riverkeeper Kemp Burdette. “How are we to believe them when they have been deliberately pumping their toxic waste into the Cape Fear River, including on the very same day millions more gallons of sludge were also spilling into the Dan River as a result of Duke’s carelessness.”

State officials have notified cities downstream of the findings at the Cape Fear plant.
None of the downstream municipalities have reported problems meeting U.S. Environmental Protection Agency drinking water standards. However, DENR officials are collecting water samples in the Cape Fear River downstream from the plant to determine if surface water meets state water quality standards.
Duke Energy is permitted by the state to discharge treated wastewater from the ash ponds into the canal through vertical spillway pipes, known as risers. The coal ash lagoons and risers at the Cape Fear plant provide physical treatment that allows heavier, more concentrated ash residuals to settle to the bottom of the lagoons over time.
Yet the state’s investigation revealed that the pumping activities bypassed the riser structures and accelerated the drawing down of the lagoons so much that they no longer properly functioned as treatment systems.
According to Duke Energy, the company was using a temporary pumping system to lower water levels in two basins at the Cape Fear plant to perform upcoming maintenance.
“We were notified by phone in August that Duke Energy intended to conduct routine maintenance work at these ash ponds,” said Tom Reeder, director of the NC Division of Water Resources. “The state’s investigation revealed that the pumping activities ongoing at this plant far exceeded what would reasonably be considered routine maintenance.”
Prior to the March 11 inspection, staff with the Division of Water Resources inspected the Cape Fear plant on Dec. 6. During that visit, the state inspector noticed parts of disconnected pumping equipment on the berm next to one of the lagoons, but its levels did not appear to be lower.
Duke Energy did not mention to the inspector during the Dec. 6 inspection that pumping had been on-going in the months prior to the inspection.
By law, the state agency can issue civil penalties for violations of state environmental laws but is required to give the company 10 days to respond to the notice of violation.

“Duke Energy has had such a cozy relationship with NC regulators and legislators for so long they don’t even think twice about breaking the law with respect to their poisonous coal ash pollution,” said Waterkeeper Alliance attorney Peter Harrison.