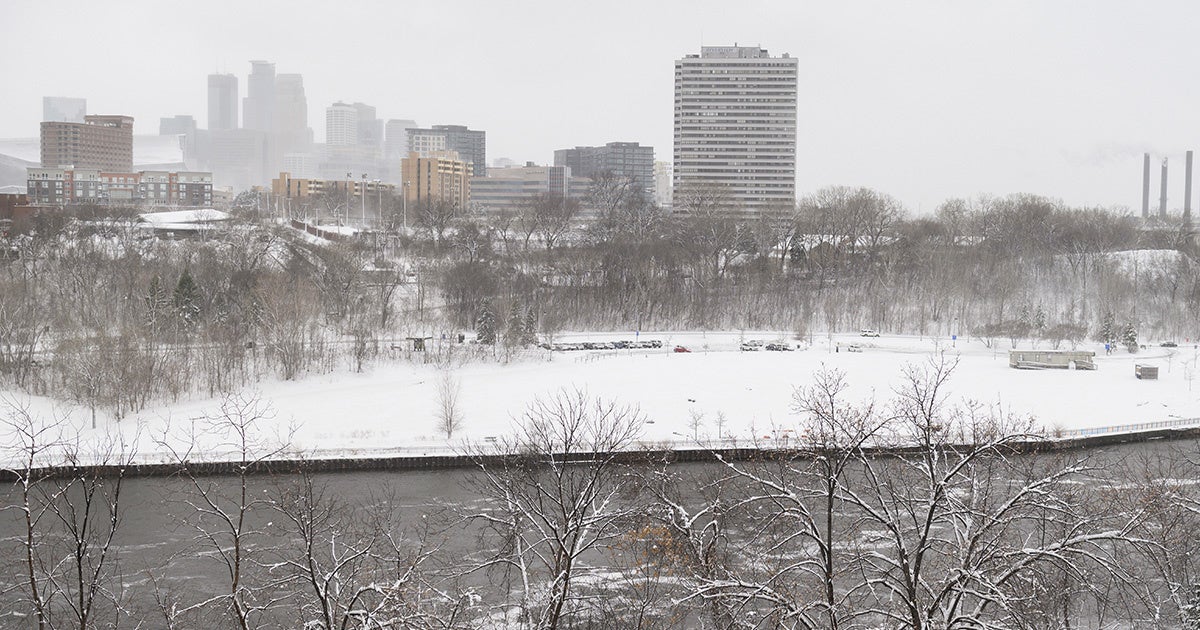 Downtown Minneapolis, Minnesota and the Mississippi River on April 11. The week started with two sunny spring days and has since turned to blizzard conditions. Stephen Maturen / Getty Images

One person died and tens of thousands lost power as the second “bomb cyclone” in a month brought snow and wind to the central U.S. Wednesday and Thursday.

The storm dumped snow on Colorado Wednesday, canceling hundreds of flights at Denver International Airport before moving through the plains to the upper Midwest, where it covered some parts of the region with up to two feet of snow, the Associated Press reported. Heavy snow fell in Colorado, Wyoming, South Dakota, North Dakota, Wyoming, Minnesota and Wisconsin, The Independent reported. Whiteout conditions were also reported in parts of Nebraska and Kansas, according to the Associated Press.

“We’re calling it historic because of the widespread heavy snow,” South Dakota meteorologist Mike Connelly told the Chicago Tribune, as The Independent reported. “We will set some record.”

The storm claimed at least one life when a Colorado man lost control of his vehicle and crashed into a snow plow, AccuWeather reported.

The weather site projected the storm would cost billion in economic damages. It led to road closures and forced the cancellation of almost 1,000 flights across the region. Conditions prompted Minnesota Governor Tim Walz to declare a state of emergency Thursday night.

Blizzard conditions in Minnesota led to more than 500 crashes, the Minnesota State Patrol said, according to the Associated Press.

“It’s a mess out here. And that is an understatement,” Minnesota State Patrol Lt. Gordon Shank said.

A video posted on social media by the Minnesota Department of Transportation showed every power line down along a stretch of Highway 59, NPR reported.

This morning, Hwy 59 south of Fulda (southwest Minnesota) closed after a stretch of power lines fell. Our supervisor shot this video with a dash-mounted camera while assessing the damage. https://t.co/yhtPwRf2sU for closure updates. @mndotscentral pic.twitter.com/B3IG8Ih47L

AccuWeather said the heaviest snowfall in the region had ended as of Friday morning, but that driving would still be difficult because of light snowfall and wind gusts.

The storm comes about a month after another “bomb cyclone” triggered record-breaking flooding along the Missouri and Mississippi Rivers. This storm is not expected to cause as much flooding, AccuWeather explained:

In contrast, rain associated with this storm was not as widespread and snow farther north is not expected to rapidly melt.

Even though rivers are high and some are currently still at major flood stage, a new round of record river flooding is not expected behind the storm.

A “bomb cyclone” is defined as an extreme weather event in which air pressure drops 24 millibars in 24 hours, leading to a strong storm system, as CNN explained.

Colorado state climatologist Russ Schumacher told CBS News that it was unusual to see two such extreme storms in close succession, but it was not possible to say if climate change was responsible.

“I think it’s an interesting question to ask whether there’s some climate change fingerprint on this,” he said. “But it’s a complicated puzzle to piece together.”

However, in general global warming has increased both heavy rainfall and flooding in the Midwest as warmer air can hold more moisture, which means storms pour harder, the National Climate Assessment concluded.

If temperatures are cold enough, that moisture can fall as snow as well.

“During the period when it is cold enough to snow, if you’ve got enough moisture in the air, you can get some wicked big snowstorms,” Princeton University professor of geosciences and international affairs Michael Oppenheimer told PBS in 2015.

Do You Remember Normal #Weather? Scientists Say Most of Us Don't https://t.co/nalC5uCNQx @350 @ClimateNexus