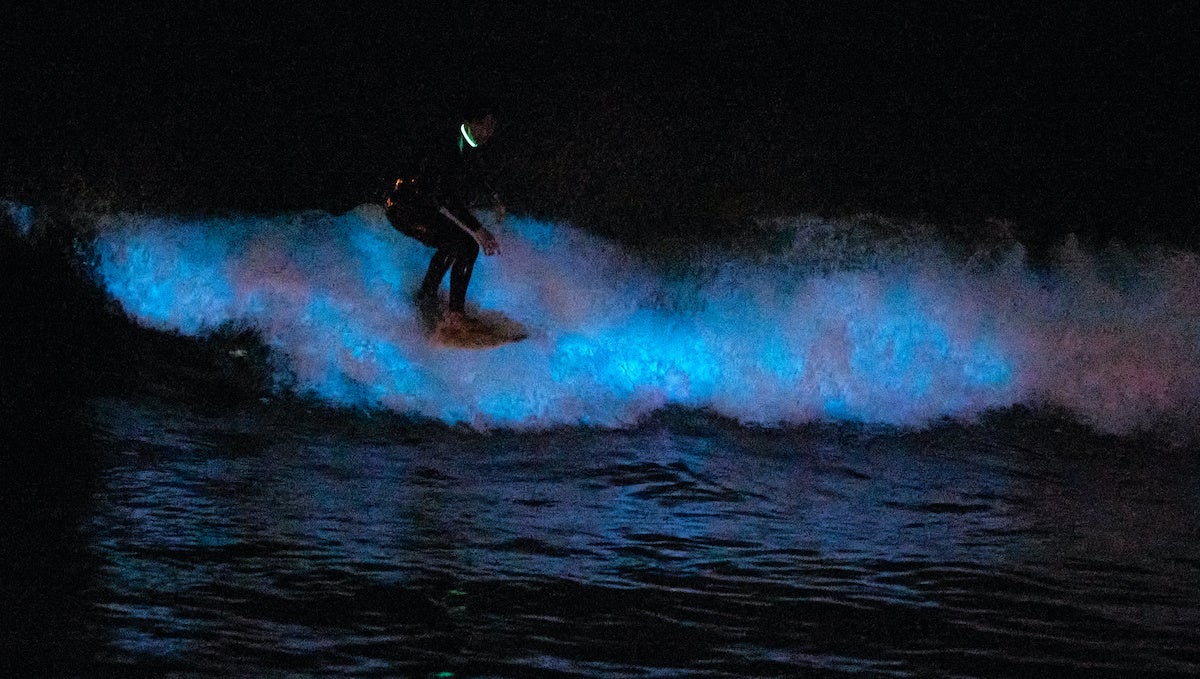 A surfer rides on a bioluminescent wave at the San Clemente pier on April 30, 2020 in San Diego, California. Joe Scarnici / Getty Images

Beachgoers in California are enjoying a dazzling display of crashing bioluminescent waves in Southern California. The waves light up at night as they crash and froth in the shallow water, The Guardian reported.

Surfers riding on the lit up waves described it as a once in a lifetime experience, and one said she felt like she had superpowers when she touched the electric blue water, according to KABC in Los Angeles.

An algal bloom of phytoplankton in the water causes the remarkable display. The phenomenon occurs every few years along the coast of southern California, though locals say this year’s sea sparkle is especially vibrant, possibly related to historic rains that soaked the region and generated algal bloom, as The Guardian reported.

“I’ve been surfing for 20 years now, and I’ve never seen anything like it,” said Dale Huntington, a 37-year-old pastor at a church in San Diego. Huntington woke up at 3 a.m. after beaches reopened to surf the iridescent waves, according to The Guardian.

“My favorite part was paddling out – it was almost like there was a glow stick around your hand,” said Huntington to The Guardian. “My board left a bioluminescent wake. There were a few of us out there and we were giggling, grown men shouting ‘this is so cool’ and splashing around like kids in the bathtub.”

Last week, Patrick Coyne captured footage of a pod of dolphins in the bioluminescent waves. Newport Coastal Adventure uploaded the video to its Facebook page, according to KABC. The company said its captain took Coyne out to look for dolphins Wednesday and encountered the amazing interaction with the glowing dolphins just after sunset.

The phytoplankton organisms responsible for the light show are known scientifically as Lingulodinium polyedra. They collect on the water’s surface, giving the surface a reddish-brown tint, known as a red tide. At night, the algae put on a light show and are particularly noticeable in turbulent waters, according to The Guardian.

The tiny creatures turn bright blue in “predator avoidance behavior,” according to bioluminescence expert Michael Latz, a scientist at Scripps Institution of Oceanography at UC San Diego, as Patch reported.

The bioluminescent algae have drawn crowds to beaches. One San Diegan, who lives in a coastal neighborhood, implored local officials to restrict access to the beach while shelter-in-place orders are still in effect, complaining that the red tide has drawn large crowds like the “Fourth of July on steroids,” as The Guardian reported.

ABC-San Diego news affiliate KGTV offered guidelines for enjoying the light show, which included observing public health orders, not staying in one spot, and being mindful of the terrain so you avoid dangerous bluffs and rocks.

It is safe to swim in the water, though night swimming is inherently risky. The Orange County Register reported that the red tide algae do not produce yessotoxin, a compound that acts as a neurotoxin, which happens in areas of the Mediterranean and the Gulf of Mexico.

Red tides stretch from Baja California up the coast to Los Angeles. They have been noticed since the early 1900s and can last from a few days to a couple of months. Scripps Institution of Oceanography scientists say the glows are most lively at least two hours after sunset, according to The Guardian.