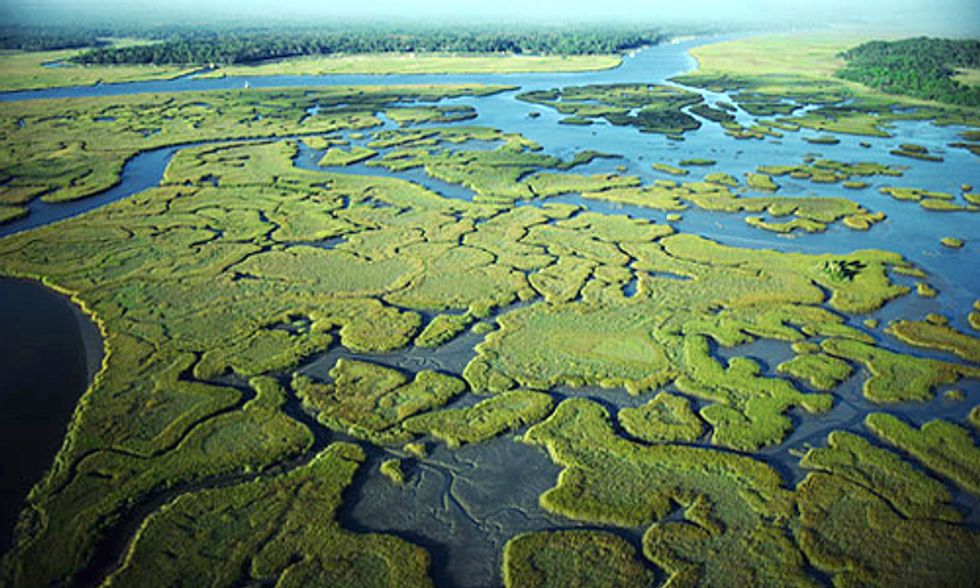 Plans to drill for oil close to the Florida Panther National Wildlife Refuge on the western edge of the Everglades have environmentalists worried. A number of companies want to drill and test beneath the Big Cypress National Preserve where prospectors believe significant new oil and gas resources lie buried.

People living near the Florida Panther Wildlife Refuge first learned about these plans when they received a surprise notice in May 2013 advising them about evacuation plans if a gas leak or explosion occurred at the proposed drilling site located less than a mile west of the refuge.

“Initially I was concerned about the one well proposed next to the Florida Panther Refuge. There will be a lot of noise and a gigantic construction site for the well next to the pristine wetlands,” says Matthew Schwartz, executive director of the South Florida Wildlands Association that’s leading a grassroots effort to protect the Everglades from drilling.

“[Then] I found out the leasing company had about 115,000 acres and includes most public lands in southeast Florida. Other companies want to come in. A giant swath of land will be turned over to drilling companies. So it is not a pleasant scenario for the future,” Schwartz said.

The well next to the panther refuge is only a small part of the 115,000 acres of mineral rights the Dan A. Hughes Company of Beeville, TX, has leased from Collier Resources, the actual owners of more than 800,000 acres of mineral rights in southwest Florida. The lease, that runs for five years and can be extended, includes parts of the Florida Panther Wildlife Refuge, Picayne Strand State Forest, Fakahatchee Strand Preserve State Park, Big Cypress National Preserve, Corkscrew Regional Ecosystem Watershed and the Audubon Corkscrew Swamp Sanctuary.

Collier Resources has issued two more leases for large seismic testing operations to identify more locations for drilling. The Mississippi-based Tocala LLC, has acquired a lease for 103,000 acres. It covers a large portion of the land just north of the Florida Panther National Wildlife Refuge and the Big Cypress National Preserve and includes part of the Dinner Island Wildlife Management Area. The lease also includes a section of State Road 29.

The second lease is held by Burnett Oil Company of Fort Worth, TX, though it has not been approved yet. If it is approved, exploratory drilling would be conducted in four phases, eventually covering 234,510 acres of land inside the Big Cypress National Preserve, that’s one of the last contiguous Florida panther habitats remaining in the western Everglades. The Florida panther is one of the most endangered species in the country—only about 160 of them are left in the wild.

Exploratory operations by both companies involve driving off-road vehicles through wetlands, drilling thousands of holes and setting off dynamite charges.

A growing number of environmentalists believe that the Everglades shouldn’t be drilled and that we don’t need more oil. “I don’t think we should be degrading the Everglades for oil,” Schwartz says. “We don’t even need more oil, we should leave it in the ground. We are risking lands so an oil company can pull a small amount of oil out of the ground and degrade the land.”

During a Florida Department of Environmental Protection administrative hearing on the oil well in Fort Myers last month, residents and environmental groups raised a number of issues against Dan Hughes’ plans to drill near the panther refuge.

The exploratory oil well, they pointed out, is located in the primary zone of the Florida panther—and telemetry (electronic readings from collared panthers) show it to be an area of high level panther activity. “This is not surprising considering the site is located on a piece of undeveloped land next to the Florida Panther National Wildlife Refuge with the highest density of panthers in the state,” Schwartz says.

Additionally, the area just outside the pad contains extremely important wetlands, vital watersheds that are home to rare plants and animals. The Stumpy Strand flows east of the site in a generally north to south direction. It connects with Lucky Lake Strand which flows into the Merritt Canal and into the Picayune Strand State Forest—site of a 30-year, $10 billion Everglades Restoration Project currently in progress. The Panther Refuge boundary was expanded to encompass Lucky Lake Strand and prevent its future development.

The Florida panther is one of the most endangered species in the country—only about 160 of them are left in the wild. Photo credit: Wikimedia Commons

The exploration plans include construction of a road and drill pad requiring more than 14,000 cubic yards of fill material. If large dump trucks capable of carrying 20 cubic yards each are used, that would amount to approximately 700 truck loads. Additional equipment will be needed to move the fill around. Critics say the noise, vibrations and dust during construction will impact the surrounding wildlife habitat, wetlands and vegetation. Once the drill is set up, the pad and 150 foot drilling tower will be lit up at night. Drilling will be going on around the clock. Three generators will power this massive industrial operation.

Considering the importance of these still pristine and irreplaceable wetlands to our wildlife and ecosystems, even small spills of oil or other fluids from this operation can have enormous implications. Even if there are no spills, it’s expected that wildlife will be disturbed by these combined operations and will be displaced by them. In the case of panthers this can be extremely dangerous. Three panther dens have been historically documented in the vicinity of this well, according to Schwartz, and a number of panthers have been killed in collisions with cars in the area. This is the leading cause of death for this highly endangered species, especially along Interstate-75 that’s just south of the drill site. Increased traffic doesn’t bode well for the big cats.

The oil companies have not clarified exactly what they will do with the leased land. “The area we are looking at is in Big Cypress National Preserve, it is not part of Everglades National Park,” says Rob Hilliard, regulatory manager for Burnett Oil Company. “We are at the outset of what is a long permitting process and we don’t know if we will ever drill there. We have to conduct seismic testing and that requires federal and state approvals.”

Hilliard said his company was proposing to use vibroseis method for seismic testing. “This method is different and that is done by three vibroseis buggies that use a vibrating plate that works like a sonar system and does not use explosives. We believe this minimizes the impact on the environment,” he says.

Following exploration, if Burnett were to decide to drill for oil, the company would have to go through an extensive federal and state permitting process again. “For us that would be a long way down the road,” Hilliard says. “We would be have to be very careful about the environment. Burnett prides itself on being environmentally sensitive.”

Other, pro-industry groups don’t believe there will be problems with the drilling. Oil has been produced in that area since 1943 and there have been few problems, says David Mica, executive director of the Florida Petroleum Council. “Drilling there is in the public interest. We need American energy and we need the jobs it will produce. We need the revenues it will produce. We have panther protection programs. We need to be less dependent on foreign oil. The track record of the oil industry is very positive and successful in producing down there. We are in harmony with nature,” Mica says.

Godsea says the oil drilling company will not be digging canals affecting the refuge. “It is a sensitive environment and we are taking very careful steps to mitigate potential problems with surface drilling and surface disturbances to get at the mineral rights. Those interests have a legal right to get to the minerals. We are concerned about protecting the native environment.”

Resistance to Big Oil Heats Up in Florida