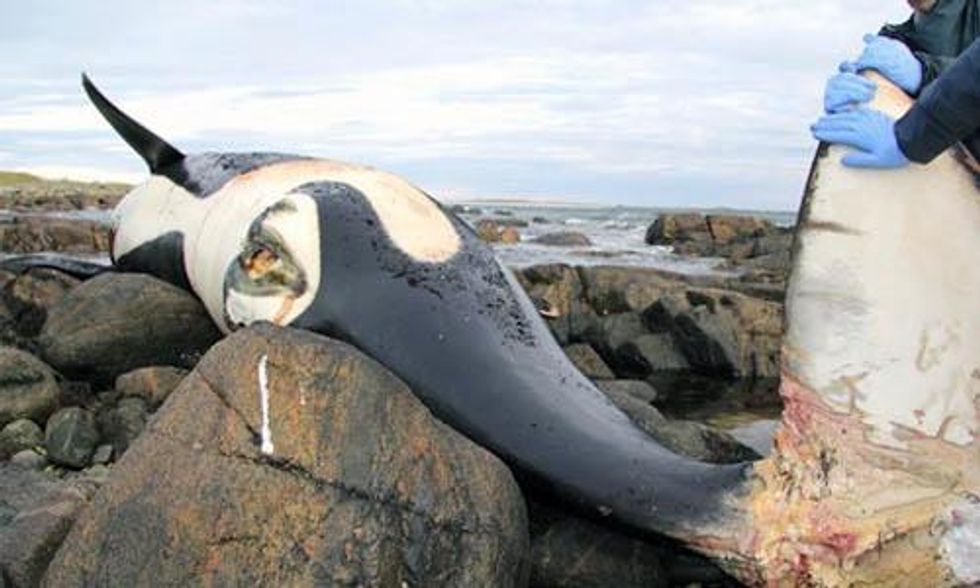 At EcoWatch, we've seen way too many atrocities on our oceans' magnificent creatures due to human-caused activities.

This time, an adult female killer whale named Lulu was found dead on Jan. 3 on the Scottish island of Tiree with deep lesions on her body. After a necropsy was performed, experts with the Scottish Marine Animal Strandings Scheme concluded that Lulu had been "chronically entangled" in abandoned fishing gear for several days and likely drowned from entanglement.

Sadly, as many local reports have pointed out, the death of the whale has put the future of the United Kingdom’s orca population in peril.

The BBC reported that Lulu was a member of Britain's only known resident population of the mammals. Now, there may be only eight remaining individuals in the killer whale's pod.

Specialists from the Hebridean Whale and Dolphin Trust used photos from the Trust’s photo ID catalogue to identify the carcass as Lulu from her distinctive eye and saddle patches.

Dr. Conor Ryan, the trust's sighting and stranding officer, said in a statement: “It is particularly sad to know that another one of these killer whales, unique to the British and Irish Isles, has died. There may be as few as eight individuals remaining in this population, which has not produced calves since studies began.”

"There were deep, granulating wounds around the tailstock and tell-tale twin linear abrasions on the underside of the tail fluke. These are consistent with a rope wrapping around the tail and trailing behind the animal, probably still attached to something at the other end. This would have made normal swimming very difficult, and we suspect the animal had been entangled for several days."
Photo credit: Scottish Marine Animal Strandings Scheme

The Scottish Marine Animal Strandings Scheme conducted an examination of Lulu four days after she was found dead. The organization posted the results of the necropsy onto their Facebook page on Jan. 6, and wrote in graphic detail about the "tragic" circumstances of her death.

Because Lulu was found with deep lesions on her body—perhaps from fishing gear, ghost nets or marine debris—the experts concluded that she might have drowned due to entanglement in the equipment. Here is the Scottish Marine Animal Strandings Scheme's Facebook post:

A very unfortunate but interesting first necropsy for 2016. We’re out on the Isle of Tiree at the moment having necropsied an adult female killer whale (Orcinus orca). This animal has been identified as ‘Lulu’, one of the animals from the Scottish west coast community. By the time we had heard of her stranding and travelled to Tiree, she had been dead for 4 days, so much of the internal organ structure had been lost. Nonetheless we found convincing evidence that she had become chronically entangled and this was the most likely cause of her death. There were deep, granulating wounds around the tailstock and tell-tale twin linear abrasions on the underside of the tail fluke. These are consistent with a rope wrapping around the tail and trailing behind the animal, probably still attached to something at the other end. This would have made normal swimming very difficult, and we suspect the animal had been entangled for several days. She hadn’t fed recently but had swallowed a large amount of seawater, most likely as she eventually succumbed to the entanglement and drowned.

There were no ropes or gear left on the carcase; we’re assuming all this from the lesions we found on her body, so we don’t know if this was due to active fishing gear, abandoned or ‘ghost’ gear, or other marine debris. The lesions are very similar however to those we see from creel rope entanglement in baleen whales. This is the first killer whale we have seen which has been entangled, although we have had an increase in entanglement incidence in other large cetaceans over the past year.

These types of mortality are particularly tragic, however from examining this case we should be able to learn a little more about a poorly understood population. We have samples to examine age, reproductive status and pollutant burden, and this will form part of future studies.