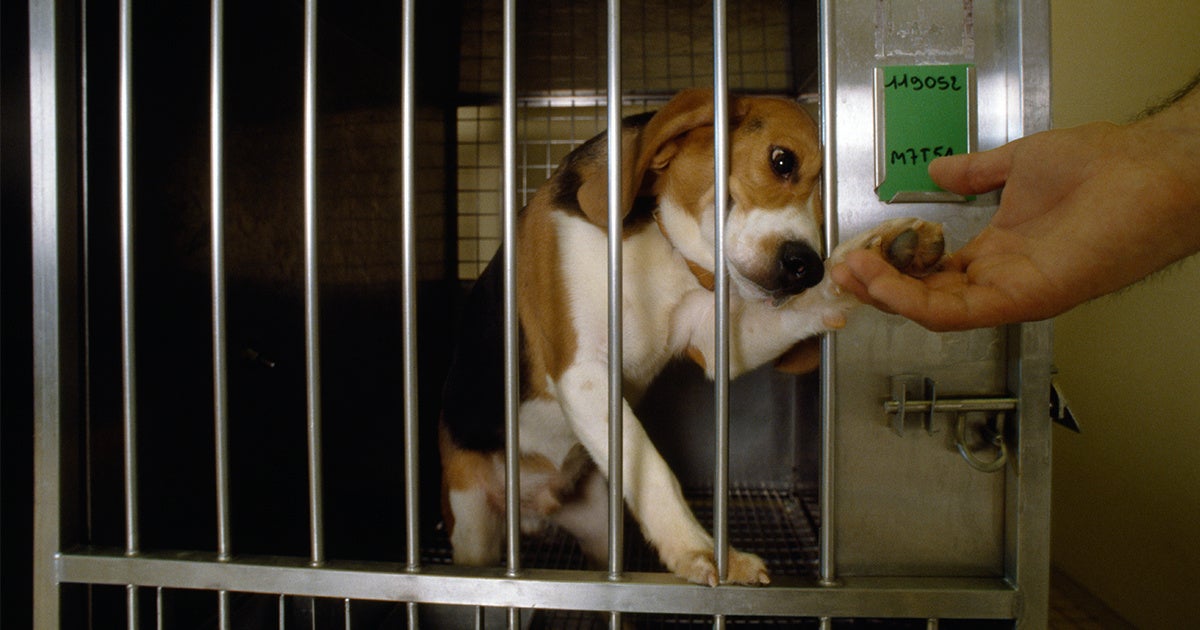 A beagle in a cage at an animal testing lab in France; beagles are often used in tests because of their friendly nature. Yves Forestier / Sygma via Getty Images

Thirty-six beagles are in danger of being euthanized at the end of a pesticide test, the Humane Society of the United States (HSUS) revealed Tuesday.

The beagles’ potential fate was only one of several shocking revelations uncovered by an almost 100-day HSUS investigation into the testing of beagles and hounds at Charles River Laboratories in Michigan.

“The disturbing findings at this facility are sadly not unique. Experiments are happening at hundreds of laboratories each year throughout the country, with more than 60,000 dogs suffering. But that does not have to be the fate for these 36 beagles,” HSUS President and CEO Kitty Block said in the press release.

Dow AgroSciences is conducting a one-year pesticides test on 36 beagles! This cruel & unnecessary test includes the force-feeding of pesticides to the dogs.

We must act fast as the dogs who don’t die from the toxicity test will be euthanized! https://t.co/K3g8GtvzoC pic.twitter.com/1Z103Mdpok

The beagles are being used in a test by Corteva Agriscience™, the Agriculture Division of DowDuPont, to assess a new fungicide called Adavelt®. They are being force-fed the fungicide via gelatin capsules for one year, and will be killed in July 2019 to assess damage unless the test is stopped. The U.S. Environmental Protection Agency (EPA) used to require that fungicide be tested on dogs for one year, but abandoned the requirement a decade ago after scientists said it did not give useful information, HSUS explained in the investigation report.

However, the test is still technically required by Brazil’s Agência Nacional de Vigilância Sanitária (ANVISA), which is why DowDuPont told HSUS they were conducting it. HSUS said it had received an email from ANVISA saying it would grant waivers to companies wishing to be exempt from the test. HSUS also asked for and received a formal, written confirmation of the policy. But DowDuPont’s regulatory affairs division said that it needed confirmation from ANVISA on its product specifically, according to HSUS.

“For months we have been urging Dow to end the unnecessary test and release the dogs to us. We have gone to considerable lengths to assist the company in doing so, but we simply cannot wait any longer; every single day these caged dogs are being poisoned and are one day closer to being killed. We must turn to the public to join us in urging Dow to stop the test immediately and to work with us to get these dogs into suitable homes,” Block said.

DowDuPont, for its part, released a statement saying it had been working with HSUS to persuade ANVISA to scrap the test requirement, and would stop the test as soon as the Brazilian agency confirmed it had done so.

“Animal testing is not something Dow undertakes lightly, but neither is it something the Company can discontinue when it is required by regulatory authorities,” DowDuPont said.

Please read our statement in response to the report published today by the Humane Society of the United States. pic.twitter.com/kyNsPlSPzR

In addition to the fungicide tests, the HSUS investigation, which ran from April to August 2018, uncovered other incidents including tests by Paredox Therapeutics and Above and Beyond NB LLC. The press release summarized the findings:

Among the beagles tested on, the Humane Society of the United States documented the horrible short life of one dog named Harvey who clearly sought attention by humans and was characterized by the laboratory staff as “a good boy.”

Harvey was being used to test the safety of two substances when poured into the chest cavity in a study commissioned by Paredox Therapeutics. Hounds were also used when the protocol called for a larger dog breed, such as a study by Above and Beyond Therapeutics for surgical implantation of a device to pump drugs through the spinal canal. Charles River carried out tests on dogs for at least 25 companies during the time of the Humane Society of the United States investigation.

The HSUS is working to replace animal testing with more effective ways of assessing the harms and benefits of substances. It said that 95 percent of human drug tests fail even after promising animal results.

“We must bring science into the 21st century for the benefit of humans who desperately need treatment and for the dogs whose lives deserve to be spared,” the investigation concluded.

Correction: A previous version of this article incorrectly stated that the University of Vermont supported the Paredox Therapeutics study. The post has been changed with the updated information from the Humane Society of the United States. Additionally, the article has been updated to reflect the fact that the fungicide test is being conducted by Corteva Agriscience™, the Agriculture Division of DowDuPont, not Dow AgroSciences, according to the companies updated statement.