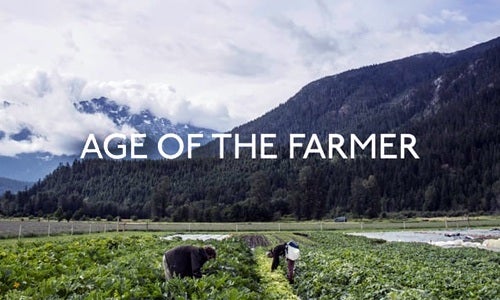 “Sometimes, you think ‘oh everyone is getting into farming, it’s the cool thing to do now.’ But actually that’s not true at all. No one’s getting into farming,” says one of the young farmers in the video below. Despite how trendy eating locally has become and despite the rise in the number of farmers’ markets, Community Supported Agriculture and urban farming projects, the number of young people in agriculture remains incredibly low.

There are simply not enough young people in agriculture to replace an aging workforce that will soon retire. The average age of a farmer in the U.S. is 58 years old. There are now six times more farmers 65 and older than there are farmers 34 and under, according to one study.

“Today, the nation’s farmers are 17 years older than the average American worker, with the ranks of farmers who are 75 years and up outnumbering those in their prime working years of 35 to 44,” says National Geographic. However, there are many organizations, such as the National Young Farmers Coalition, who are working to change that.

Spencer MacDonald and Eva Verbeeck are among those helping to highlight the stories of young people taking the bold leap into the field of agriculture (pun intended). MacDonald and Verbeeck took a road trip through the Pacific Northwest—from Portland to British Columbia—to produce a short film on young farmers. They worked for the farms they visited in exchange for room and board. The film, says MacDonald, “is an attempt to express some of the thoughts and feelings of the young farmers that we stayed with.”