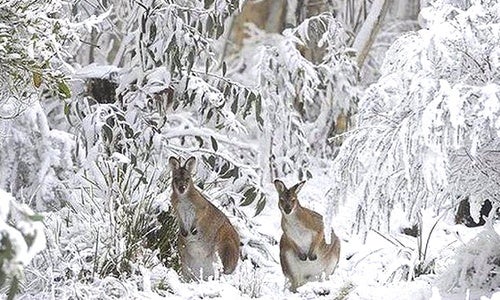 July means winter “down under” in Australia. And winter they are getting. “Icy blasts of wind have led to an unusual blanket of heavy snowfall across Queensland—which typically calls itself the “sunshine state”—during some of the coldest winter weather in decades,” reports The Telegraph.

We have snow in #thisisqueensland! So… What do we with this stuff? Any tips? Pic: Alure #Stanthorpe @sqcountry pic.twitter.com/xf1yoTVjX5

While it’s not uncommon for parts of eastern Australia, including Queensland and New South Wales, to see snowflakes or minor accumulation, there hasn’t been snow or cold like this in a while. The last significant snowfall in this area was a little more than an inch in 2007. This time some areas saw three inches of snow and recorded their lowest temperatures in more than 40 years. “Cold fronts, caused by blasts of icy winds from Antarctica, are common during Australian winters but this year’s has been much stronger than usual,” says The Telegraph.

Queensland, which is about the same distance from the equator as Florida, is more known for sun-drenched beaches and drought than cold and snow. “We haven’t seen snow like this in 30 years,” Jess Carey, from the Bureau of Meteorology told The Telegraph. “People talk about the 1984 event—it really is the most significant since then.”

We are used to our #snowmen being sandy. Well, this is awkward 🙂 –> http://t.co/0CjKLgim5K pic.twitter.com/aZljgXdUYB — Queensland Australia (@Queensland) July 17, 2015

Sydney, in bordering New South Wales, has also “experienced unusually cold weather, with average minimum temperatures of 45 degrees Fahrenheit—reportedly the coldest temperatures recorded in July since 1971,” according to The Telegraph.

PHOTO: A kangaroo appears in a vineyard as southeast Australia gets hit by winter storm: http://t.co/RNiW8QwuQy — The Associated Press (@AP) July 17, 2015

Here’s some more proof that some Aussies are not used to this kind of cold and snow at all:

It may be winter in Australia but they rarely see snow like this on the outskirts of Sydney. http://t.co/Ocrurtl25K pic.twitter.com/IOQENnI2qd — Anthony Farnell (@AnthonyFarnell) July 17, 2015

And, of course, because it’s Australia, which has the craziest weather phenomenon, there was even thundersnow.