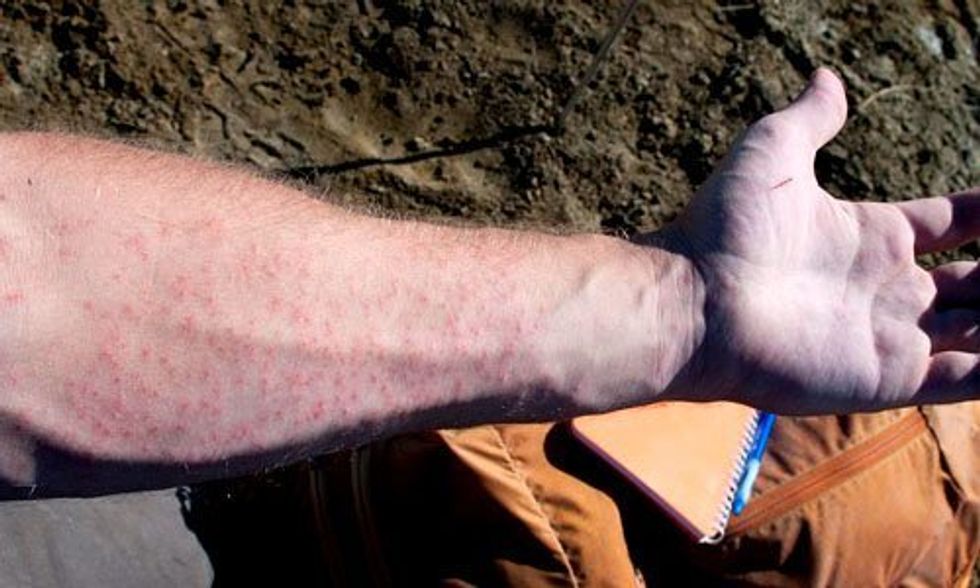 Some Alaskans joke that mosquitoes are "Alaska's state bird," but the pesky insects are becoming no joke. Warming Arctic temperatures have caused their numbers to swell immensely in the region in recent years. Lauren Culler has been studying insects in Greenland for the last several years. Culler, a postdoctoral researcher for Dartmouth College’s Institute of Arctic Studies, along with a team of researchers published a study yesterday in Proceedings of the Royal Society B.

Their findings are not good for the humans, caribou and other mammals that call the Arctic home. The study answers why this is happening. With the Arctic warming twice as fast as the rest of the planet, the Arctics waterways (mosquito breeding grounds) are melting up to several weeks sooner. Thus, mosquitoes are hatching earlier and earlier.

“It was really when the pond thawed that triggered the hatch,” Culler told National Geographic. “That’s not unexpected. Lots of biology is triggered by these melting events.” But that's not all Culler found. The warmer environment also allowed mosquitos to reach maturity faster, thus allowing more and more to survive to adulthood. Mosquitos are most vulnerable and most likely to be picked off by predators in their early stage of life as most animals are.

“The faster they go through these life stages, the better off they are,” Culler says. “If you’re only exposed for 20 days instead of 24, that’s good for you. That’s four days you don’t have to worry about being eaten.”

Caribou—mosquitoes' main food source—and other arctic animals might be able to cope with these swarms if they weren't already threatened by a changing climate. Ross Andersen at The Atlantic said that climate change has wreaked havoc on the natural cycles of the Arctic environment. Plants, which the caribou rely on for a food source, are emerging earlier and earlier because of warmer temperatures. But caribou are still calving based on the cycle of the sun. By the time caribou calves are born in May or June, there is not enough food to go around.

"Mothers are becoming malnourished. Fewer calves are being born, and fewer are surviving their crucial first few months," says Andersen. "And even when they do survive, they are still vulnerable, to overhunting, and to diseases carried north by deer that would never have survived the Arctic chill of yesteryear." Now add to that the growing swarms of mosquitoes and you see why it's a real problem.

"Arctic mosquito swarms are the stuff of legend," says Andersen. "Some of them contain hundreds of thousands, if not millions, of insects. That's enough to harass a pregnant caribou until she stops worrying about food. And it's enough to kill caribou calves outright." They inundate entire herds and the caribou's only defense is to flee, leading to decreased eating and further stress on the population. Research from the U.S. Fish and Wildlife Service has found that "insect harassment interferes with caribou foraging, which also decreases survival."

In high enough numbers, "they can drain enough blood to fell a caribou and sometimes even kill it," says the video below. "The caribou are forced off their grazing grounds by a predator 10 million times smaller than they are." That's got to sting.

And it's only expected to get worse. Culler took some of the mosquitoes into her lab and placed them into slightly warmer water to simulate Arctic waters in the near future. Her results: the mosquitoes hatched even earlier and grew even faster.

With the Arctic sea ice hitting its fourth lowest level on record last week, the Arctic can expect more and more swarms of mosquitoes in the future.

Humans in the Arctic are feeling the pinch as well. Culler told National Geographic that a colleague in Greenland was assaulted by more than 100 mosquitoes at once. And the bugs in that region were mild for the Arctic. “You can be completely covered in a matter of seconds,” Culler says.