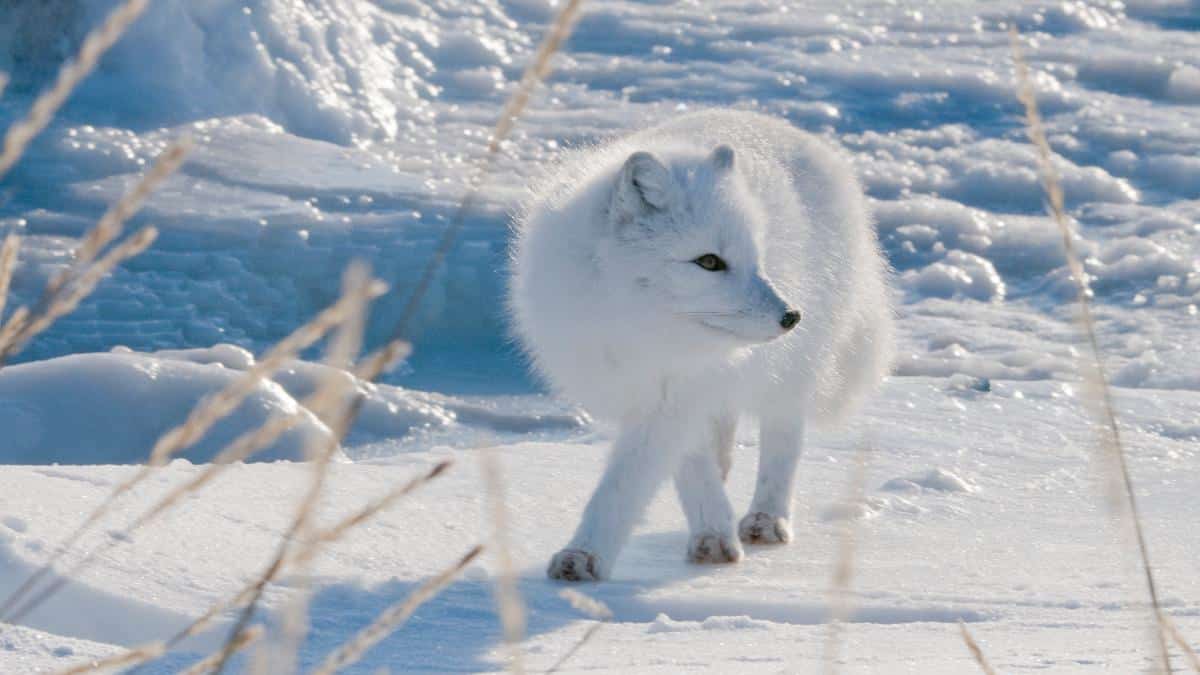 The Arctic fox's coat changes from the mixed gold and black of summer to a mostly pure white fur in winter. Dennis Fast / VWPics/Universal Images Group via Getty Images

Maybe you’ve seen a video clip of a fluffy white fox moving carefully through a frozen landscape. Suddenly it leaps into the air and dive-bombs straight down into the snow. If so, you’ve witnessed the unusual hunting skills of an Arctic fox.

During winter at the most northern parts of Earth, snow and ice transform the Arctic tundra into a blanket of white as far as the eye can see. It’s a long, cold and harsh season, and animals like the Arctic fox have a number of special tricks that help them survive. Here’s how they’re able to locate and catch their prey.

Blending in With the Arctic Landscape

Some Arctic animals have evolved unique camouflage to blend in with their surroundings. The most obvious example is the polar bear. These large predators have white fur that makes them nearly invisible as they hunt seals on the white sea ice.

Arctic foxes actually change color with the seasons. During summer, their gray and brown fur blends in with tundra rocks and plant life. This camouflage helps Arctic foxes slowly sneak up on their prey and avoid being eaten themselves.

But dark fur would make Arctic foxes easy to see on the all-white winter tundra once it’s covered with snow. As winter nears, Arctic foxes shed their dark fur and begin growing all white fur to blend in with the snow and ice. Their changing color helps keep these foxes hidden year-round.

Many of the bird species that Arctic foxes hunt during the summer migrate south to escape the harsh winter weather. The foxes are left with fewer food choices. While they still hunt some birds, like ptarmigan, on top of the snow, Arctic foxes often turn their attention to food found underneath the snow – specifically, lemmings.

Lemmings are small rodents that live on the Arctic tundra all year. To survive the cold winters, they remain active under deep snow, moving through tunnels, and search for leaves, roots and berries to eat. The snow insulates them from the cold air above, allowing them to stay active even during the middle of winter.

But how do Arctic foxes find lemmings that are hidden underneath the snow? The answer: by listening for their footsteps!

Have you ever seen a dog running through tall grass and then suddenly stop short, tilting its head back and forth? It probably looked like it was listening to something, even though you couldn’t detect what might attract its attention. In fact, there was probably a mouse or vole moving nearby, and your dog was able to hear its footsteps.

What does a mouse or lemming sound like when it runs through the grass or snow? It makes a quiet, high-pitched rustling sound. It sort of sounds like the softest gust of wind causing grass blades to rub against each other.

Most people can’t hear this sound, but your dog and Arctic foxes can hear it just fine. Because human beings domesticated dogs, they don’t need to use their special hearing to find food – we make it easy by filling their food bowls every day. But wild canids, including Arctic foxes, still very much need this unique ability to survive.

An Ambush From Above

Arctic foxes spend hours each day roaming across the tundra during winter looking for food. This includes listening for lemmings under the snow. But hearing a lemming is only the first step in getting a meal. Arctic foxes still must catch them.

Once a fox hears a lemming, it becomes almost completely still. The fox then tilts its head back and forth, trying to better locate where the lemming is. It requires careful listening to pinpoint the lemming’s quiet movements in the snow.

When a fox is confident it knows exactly where the lemming is, the ambush begins. It will jump straight up in the air, sometimes several feet, and plunge headfirst into the snow with its mouth wide open. If the attack was successful, the fox will emerge from the snow with a lemming in its mouth. Dinner is served.

Although this pouncing technique, known as “mousing,” may seem easy enough, an Arctic fox may attempt it hundreds of times per day with little success. It takes practice and persistence.

Humans make a lot of noise that makes it harder for predators to find prey. Although Arctic foxes live far enough north to avoid most noise pollution, other species including coyotes and red foxes live much farther south, where many more people live.

Coyotes and red foxes also hunt like Arctic foxes. The noise from airplanes, vehicles and other engines likely makes it harder for these species to hear rodent footsteps under the snow. And as the human population grows, bringing noise with them as they spread across the globe and into Arctic regions, it’s reasonable to assume that Arctic foxes will also have a harder time finding food.

Jacob Job is a research associate in the Department of Fish, Wildlife, and Conservation Biology, Colorado State University.

Disclosure statement: Jacob Job does not work for, consult, own shares in or receive funding from any company or organization that would benefit from this article, and has disclosed no relevant affiliations beyond their academic appointment.

Curious Kids is a series for children of all ages. If you have a question you’d like an expert to answer, send it to curiouskidsus@theconversation.com.