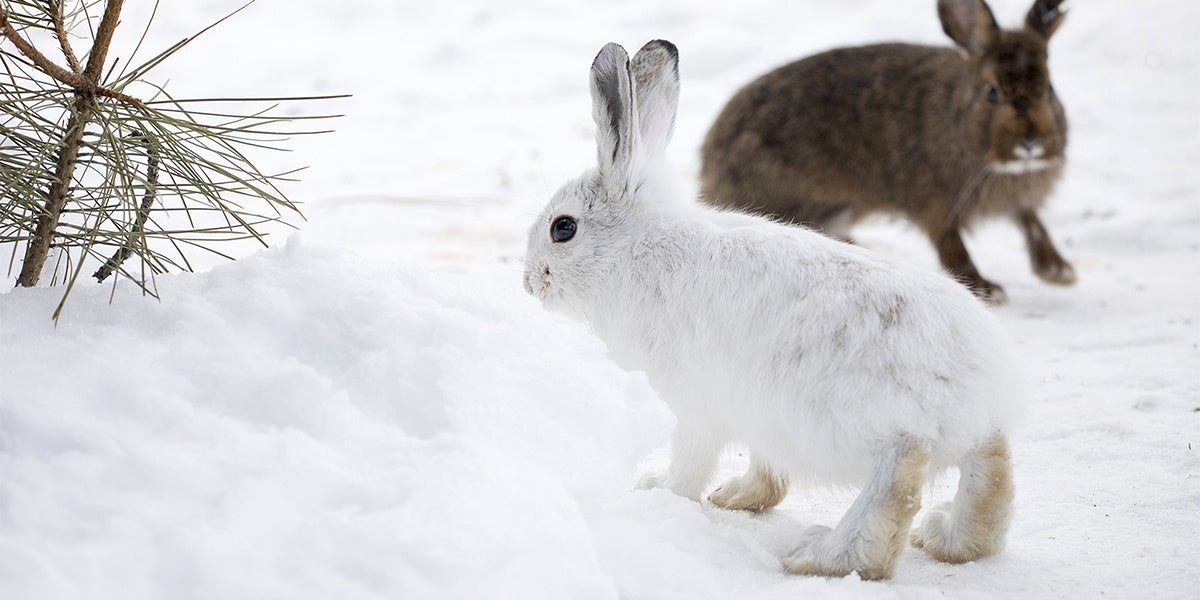 Animals that turn white in the winter to hide themselves in snowy landscapes could struggle to adapt to climate change, research suggests.

A new study finds that declining winter snowfall near the Arctic could have varying effects on the survival of eight mammal species that undergo a seasonal color molt from summer brown to winter white each year.

Species most at risk of standing out against the snow include mountain hares, snowshoe hares and short-tailed weasels. Without blending into the background, these animals could find it harder to hunt prey or hide from predators.

However, there are some parts of the northern hemisphere where color-changing mammals could have a better chance of adapting to climate change, the study finds.

These “rescue” hotspots, which include northern Scotland and parts of North America, should be protected by conservationists to give color-changing animals the best chance of adapting to future climate change, the lead author told Carbon Brief.

Visual camouflage is a vital tactic used by both predatory animals, who must hunt while avoiding detection, and their prey, who must hide to avoid being eaten.

But in parts of the northern hemisphere, the changing of the seasons offers a unique challenge to those trying to camouflage with their surroundings.

In winter, when the landscape is snowy and barren, animals with white coloring find it easiest to blend in. However, when spring arrives and snow is replaced with brown soils and growing vegetation, those with mottled brown coloring tend to find it easier to escape detection.

One solution to this problem, used by a range of animals, is to undergo a seasonal moult from brown to white each year.

Scientists have recorded 21 mammal and bird species using this color-changing tactic, including the Siberian hamster, the collared lemming and the willow ptarmigan.

The new study, published in Science, focuses on how climate change could alter the survival chances of eight of these species.

Climate change is causing a decline in winter snow cover in Arctic regions, along with the earlier onset of spring each year. This decline could be causing a “mismatch” between animals with white coats and the snowless ground, explains lead author Prof. Scott Mills, vice president of research for global change and sustainability at the University of Montana. He told Carbon Brief:

“All of these species literally live or die by the effectiveness of their camouflage, which evolution has exquisitely crafted to match the average duration of winter snow.”

This mismatch could make some animals, such as hares, more vulnerable to predators, he said. It could also make it harder for predators, such as the arctic fox, to effectively hunt their prey. Mills said:

“One thing to realize is that all 21 of these species, including the carnivores, are prey: Arctic fox get clobbered by golden eagles, weasels are killed by foxes, coyotes, and raptors. For the hares and rodents, tasty snacks for multiple predators, camouflage is everything.” 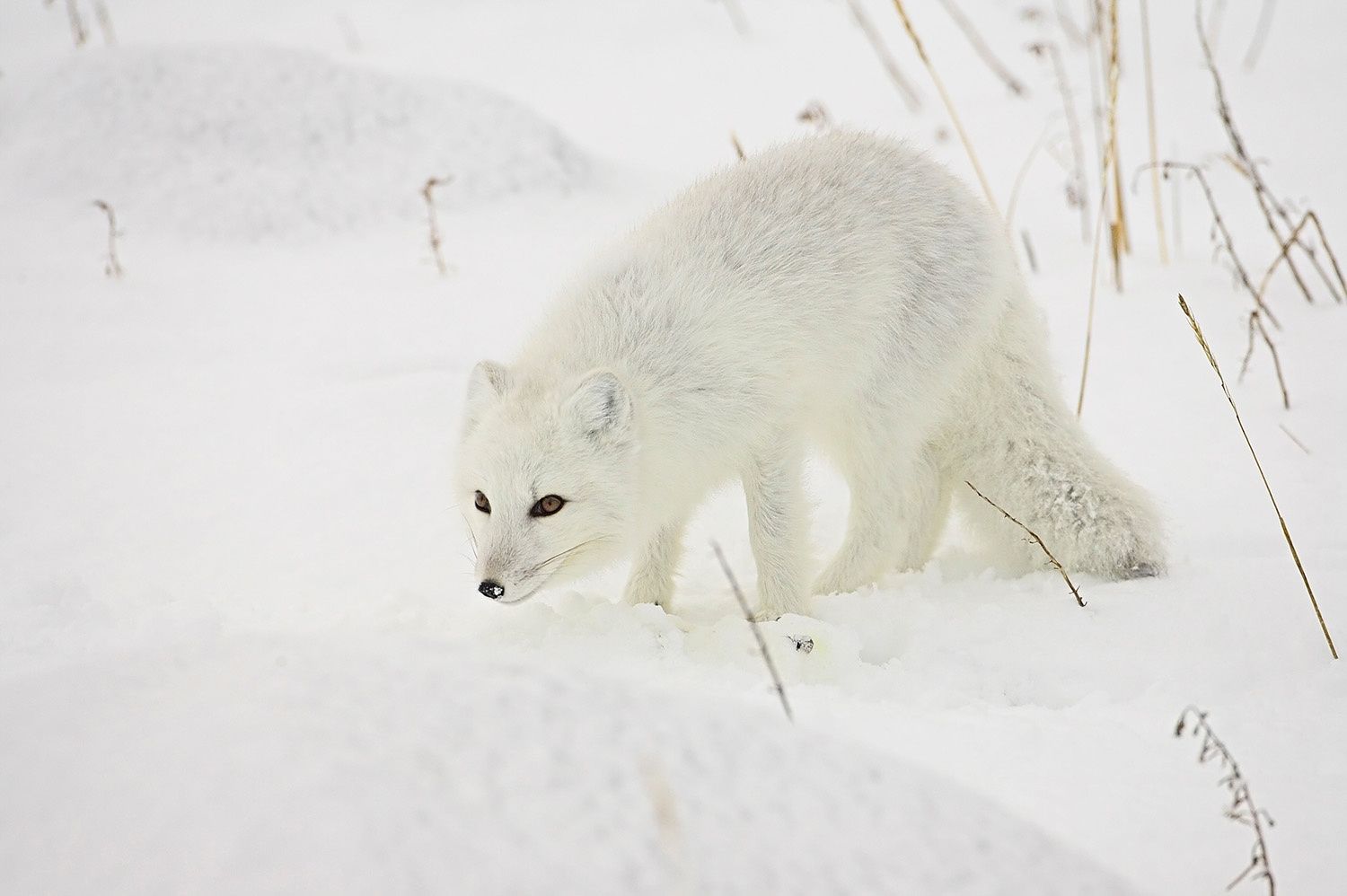 For the study, the researchers first collected coat color and location data for more than 2,500 live animals and museum specimens spanning 60 countries.

They then analyzed this data using modeling to study the molting behavior of animals living in different parts of the world.

The researchers found that, within one species, not all individuals will molt in the winter.

The chances of an animal molting depend on the landscape in which they live. The more snowy the landscape, the higher the chance an animal will turn white in the winter.

This is shown on the chart below, where the number of snow-covered days per year is plotted against the likelihood of turning white in the winter for the Japanese hare (dark blue), the white-tailed jackrabbit (light blue), the least weasel (yellow) and the long-tailed weasel (red). 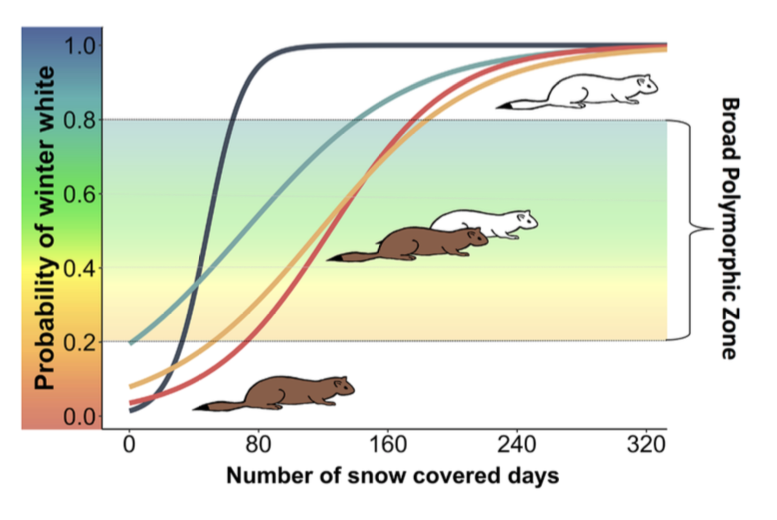 The probability of a colour-changing mammal having a white winter coat in regions with 0-320 days of snowfall per year. Results are shown for the Japanese hare (dark blue), the white-tailed jackrabbit (light blue), the least weasel (yellow) and the long-tailed weasel (red). Mills et al. (2018)

The chart also includes a “broad polymorphic zone.” A “polymorphic zone” is a term used to describe regions where the probability of having either a brown or white winter coat is close to equal.

In these “zones,” mammals could have the best chance of adapting to declining snowfall conditions, Mills said. That is because, in these areas, a proportion of each species do not turn white in the winter and are therefore more able to blend in with snowless environments.

These brown-coated animals will be more likely to survive winters with less snow cover and pass on their genes to their offspring. Over time, this would increase the proportion of animals with brown winter coats, allowing the population to adapt—and ultimately survive—in environments with less snow. 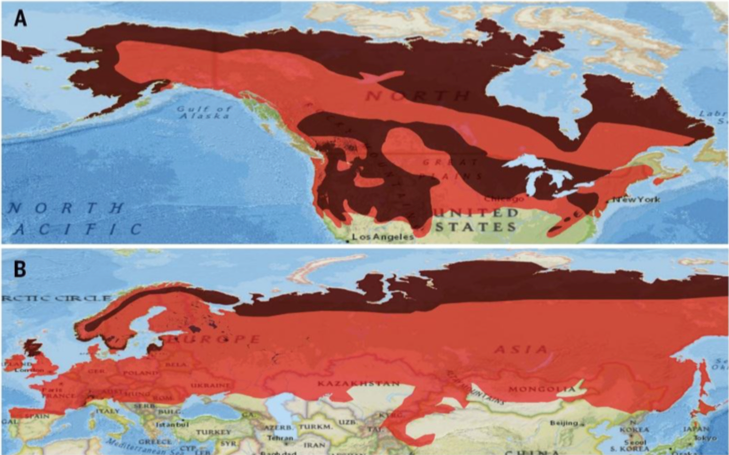 Regions in North America (A) and Eurasia (B) with polymorphic zones in winter coat colour for more than two species (red) and more than three species (brown). Mills et al. (2018)

The charts show that parts of the U.S., Canada and Scotland show the largest overlap.

These regions could be considered “evolutionary rescue zones” where a number of color-changing mammal species could be able to adapt to declining snowfall, said Mills:

“Because areas with the most [coat color] variation evolve most quickly, these ‘polymorphic’ zones emerge as hotspots for rapid evolutionary response to climate change. Here in the polymorphic zones the populations are most likely to rapidly evolve towards winter brown, and to disperse the winter brown genes out into the adjacent winter white populations.”

The species whose range most commonly fall into these zones include the arctic fox, the white-tailed jackrabbit and the long-tailed weasel, the research finds. These species may have the best chance of adapting to declining winter snowfall, Mills said, but it is still too soon to tell what their chances of survival could be:

“To really evaluate risk to various species will require a lot more fieldwork and genetic analyses for other species, like we’ve been doing with snowshoe hares. We’re starting to work with weasels and Arctic fox, but I really hope that this paper initiates researchers around the world to start investigating coat color mismatch.”

The findings should provide “yet another push to policymakers” to reduce the “global carbon footprint,” Mills said:

“I hope it also helps [policymakers] see that other short-term, yet effective, options are available for protecting wildlife in the face of climate change.”

The new study provides striking evidence of how climate change could drive the evolution of new characteristics in animals, said Prof. Innes Cuthill, a behavioral ecologist with specialist knowledge of camouflage from the University of Bristol, who was not involved in the study. He told Carbon Brief:

“We have long known that evolution can be rapid, from detailed case studies of particular species in particular locations, but the new research is a great example of how to capture the ‘big picture’ of evolution of colouration in time and space.”