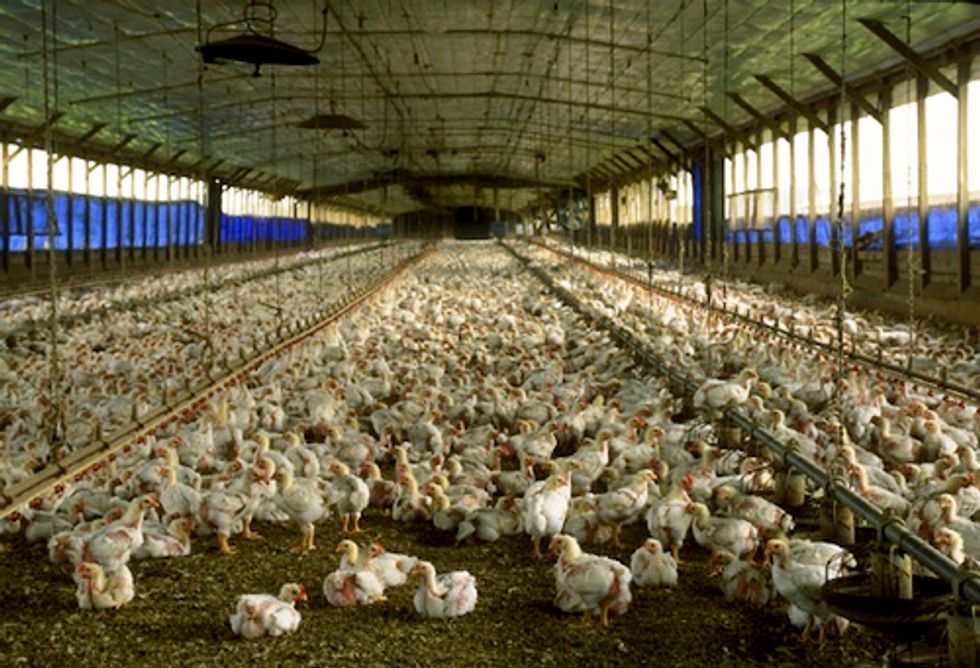 A comprehensive analysis of the U.S. meat, egg and dairy industries in 2008 excoriated  producers for their business practices. A new assessment of progress since then says industrial livestock production remains just as destructive, and little has been done to address any of the problems.
The report, from Johns Hopkins University Center for a Livable Future (CLF), says the problems identified in 2008—which included non-therapeutic use of antimicrobials in food animal production, liquid farm waste and intense and inhumane animal practices—have worsened. The CLF report blames an “assault on reforms” in Congress and finds the U.S. Department of Agriculture (USDA), Food and Drug Administration (FDA) and Congress have acted “regressively” in policymaking on industrial food animal system issues.
A commercial meat chicken production house in Florida. Photo credit: Wikimedia Commons
“There has been an appalling lack of progress,” Robert S. Lawrence, CLF director, said in a press release. “The failure to act by the USDA and FDA, the lack of action or concern by the Congress and continued intransigence of the animal agriculture industry have made all of our problems worse.”
The CLF report says that despite the continual emergence of new scientific evidence demonstrating the severity of the threats posed by the industrial meat, dairy and egg processes, remarkably little has actually been done to address any of the problems.
“If the last five years has shown us anything, it is that the public is more engaged than ever in the food system,” said Governor John Carlin, chair of the commission. “The results of this analysis show that our policymakers are really not listening to their constituents.”
The 2008 analysis by the Pew Commission on Industrial Farm Animal Production (PCIFAP) recommended:

“In 2008, the recommendations were heralded by many in the agriculture community, the agencies and Congress as the catalyst they needed to make vital changes to a food supply that has been criticized as unsustainable and in some cases unsafe,” said Bob Martin, PCIFAP executive director. “Inaction was inexcusable five years ago, now it is unconscionable.”