People Are So Annoying That Animals Are Becoming More Nocturnal 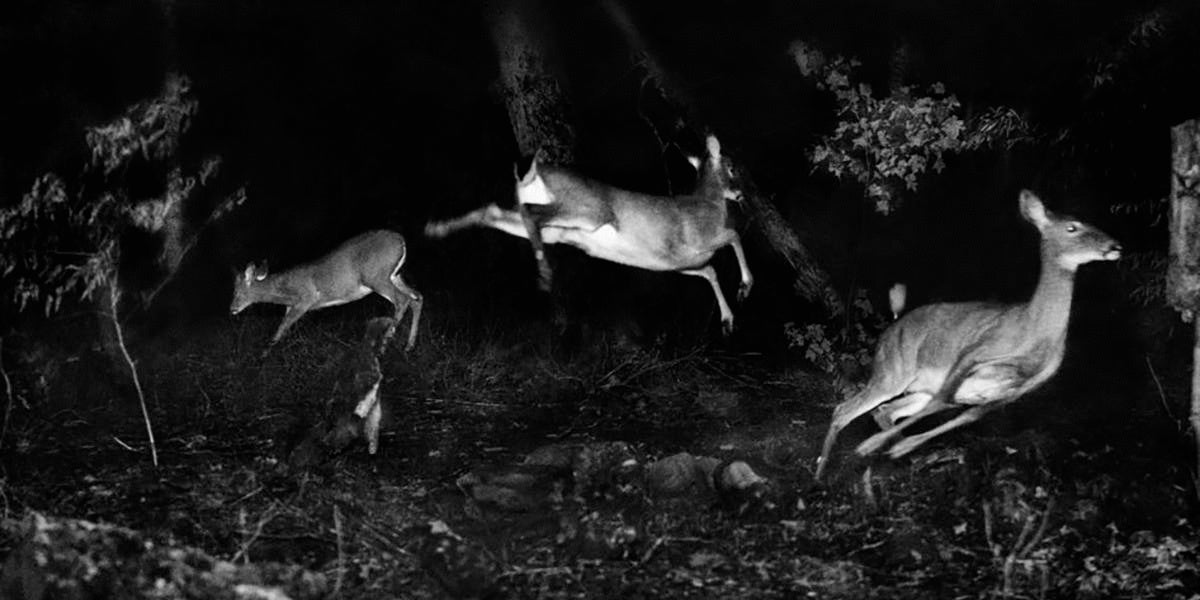 It’s official: Animals around the world are sick of our sh . . . enanigans.

After looking at 62 mammal species on six continents, a recent study published in Science found that 83 percent of these species are doing more and more of their business in the dark rather than deal with humans and all of our accompanying guns, cars, noise and other forms of harassment.

“Human activity is creating a more nocturnal natural world,” said lead author Kaitlyn Gaynor, an ecologist at the University of California at Berkeley. Gaynor said the trend is both powerful and striking.

Deer? Wild pigs? Coyotes? All of them are increasing their nocturnality in an effort to avoid spending time with us. Heck, even tigers—easily some of the planet’s scariest predators—are turning into night owls to avoid the Homo sapiens.

The hum from our cars and airplanes numb South African dwarf mongooses to noises made by approaching predators. The 24/7 cacophony produced by oil and gas operations drives away grasshoppers, crickets and ants and causes bluebirds to have fewer chicks. And you can’t even go underwater to get some peace and quiet. Our generators, propellers, engines, and military sonar drone so incessantly, they cause dolphins to lose their breath as they dive and make the hearts of narwhals go haywire. This aquatic ruckus may even overshadow the soft whispers shared between baby humpback whale calves and their mommies.

And we’re prone to fits of violence.

In Colorado, the government is spending $4.5 million dollars to kill black bears and mountain lions on a hunch that it might increase deer numbers, because people there like to hunt deer. And in 2017, the U.S. Department of Agriculture killed 23,646 beavers—one every 22 minutes—because beavers modify the environment in ways that are inconvenient for us. (Felling trees and building dams―perhaps the beavers are too similar to us for their own good.)

Tough tamarins, you might say. If the beasts don’t like it, they can move out. Well, no, they can’t. 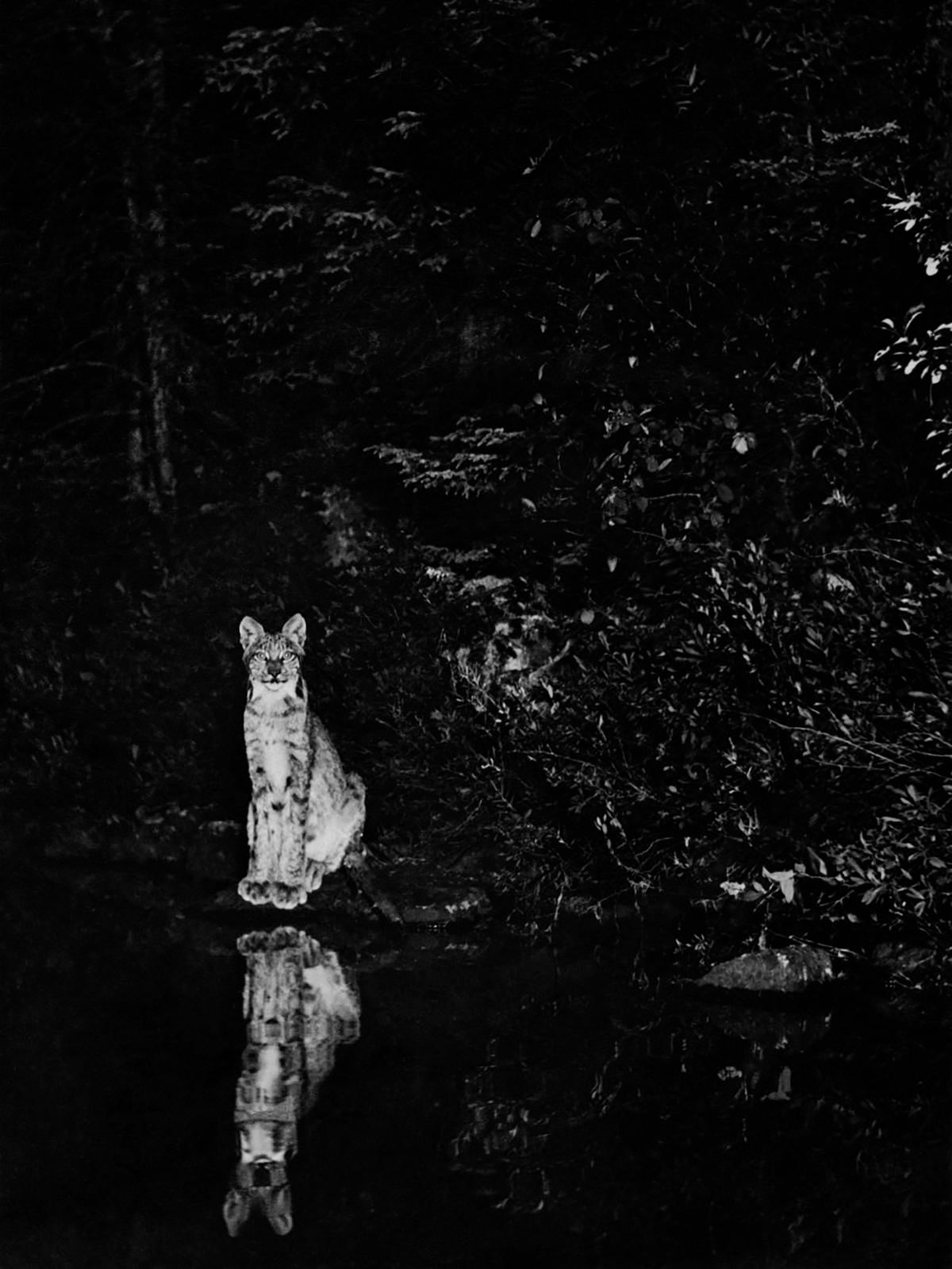 A lynx photographed at night.George Shiras

The habitat market is garbage these days. The forested mountaintops inhabited by woodland caribou have been carved up to extract tar sands. The creeks and streams that are home to the beaverpond marstonia snail have been sucked dry for irrigation and drinking water. The Ridgway’s hawk’s rainforests have been razed for livestock pastures and coffee plantations. And the polar bear’s sea ice? It’s being liquidated as we speak.

More and more species are having to figure out how to survive in a space shared with humans—even if that means altering behaviors that have evolved over millennia. According to the new paper, “In places where wild animals co-occur with humans, animals may minimize risk by separating themselves in time rather than in space.” That wording kind of makes it sound like bonobos, binturongs, and springboks are cracking the code on interdimensional time travel, but really they’re just waiting for us to call it a day, go indoors, and leave them alone.

Just look at the sable antelopes of Zimbabwe. Under normal conditions, these grazers venture down to water holes during the day because lions, hyenas, and other predators prowl such places at night. But a 2012 study found that when you apply a little pressure from trophy hunters during daylight hours, the antelopes suddenly start taking their chances with the lions creeping around in the black of night.

The leopards of Gabon use a similar tactic to avoid bushmeat hunters. In areas without many people, the cats split their waking hours between day and night almost equally (46 percent nocturnality). But in areas where hunting is prevalent, the leopards forsake the sun and spend 93 percent of their waking hours in the dark.

Our mere presence is intimidating.

It’s not just the loud and lethal guns scaring them into hiding. Just having humans walk through the forest causes Sumatran sun bears to go dark (19 percent nocturnality in low disturbance, versus 90 percent when scientists come plodding along). The same is true for big, gnarly brown bears in Alaska, who choose the night life to avoid tourists during the day (33 percent nocturnality in low disturbance, versus 76 percent in high disturbance). To be fair, though, tourists are the worst.

Could this be a good thing? Have animals discovered a way to peacefully cohabit with us? After all, some urban dwellers—raccoons, pigeons, rats—are doing fabulously as our neighbors.

Sure, it’s certainly possible for some animals to thrive in proximity to us as we slumber. “In Nepal, for example, tigers and people share the exact same trails in the forest at different times of day, reducing direct conflict between humans and these large carnivores,” said Gaynor. In this case, both species benefit.

But some wildlife isn’t equipped for such an adjustment. “Not all animals are willing or able to just switch to a nocturnal lifestyle around people,” she said. For those, we’ll need to set aside areas that remain relatively free from our influence, whether that means establishing no-hunting zones, combating climate change, or even just cutting down on human foot traffic.

Further, expecting animals to forgo thousands of years of tried-and-true survival strategies just so they can adapt to our various needs and whims is a bit selfish. It’s sort of like saying, “Oh, I let Trudy do the dishes because she cares more about them getting done.”

Just, no. Everyone should do the dishes. We need to stop asking every other living thing on earth to bend to us, to pick up our slack. Frankly, I think it’s time for a house meeting.