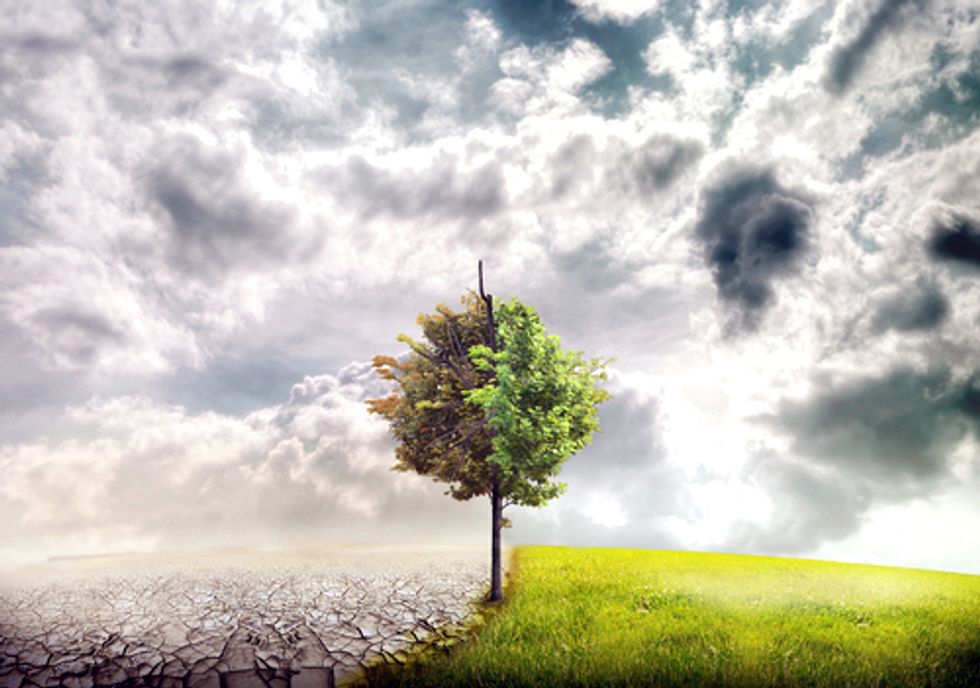 I'm so struck with America's human spirit as Hurricane Sandy has left a trail of destruction in its wake, destroying homes and businesses and turning the lives of so many upside down. And yet people remain unbowed—New Yorkers and New Jerseyans, first responders, hospital workers, National Guard and countless others—are pulling together, as they always do, in the face of tragedy. And this would be the case whether or not a Presidential election were running in the background.

But elections are, indeed, running in the background of this human consequence and the inspiration we are seeing from countless citizens is exactly the kind of determination and collective responsibility we're going to need to fight climate change—the force that super-charged this "superstorm." It will take resourcefulness and grit to reduce the carbon pollution that's fueling these storms, but Hurricane Sandy proves once again we have it.

The question is: Will we use it?

Many lawmakers and fossil fuel companies don't want us to unleash America's ingenuity on the problem of climate change. Oil, gas and coal companies have spent more than $150 million on campaign ads in this election, and their talking points are echoed on the campaign trail.

Nearly every contender for the GOP's presidential nomination denied climate change and called for more dirty fuels. Mitt Romney—who supported climate action when he was governor of Massachusetts—has joined the crowd. At the Republican National Convention, he mocked President Obama's promise to slow the rise of the oceans and heal the planet.

Romney's comment drew laughs in the conventional hall. But there was nothing funny about being in New York or New Jersey when Hurricane Sandy's storm surge breeched seawalls and swamped entire neighborhoods. This is what I find so troubling about climate deniers. By ignoring the scientific facts, they dishonor the human suffering brought on by climate change.

So far, more than 90 people died in this storm. Eight million people were without power. Thousands lost their homes. Hurricanes have always been a part of life on the Atlantic Coast, but climate change is pumping storms with more moisture and increasing their destructive power. It is turning 100-year-storms into frighteningly routine events. And unless we reduce global warming pollution, more families will experience the anguish and fear of living through powerful storms.

The true measure of climate change isn't taken in Congress or in pseudo-scientists' debates. It is taken in the communities torn apart by extreme weather. New Yorkers who saw the waters rise this week—and the Midwestern farmers who watched their crops die and Colorado residents who looked on as their houses burned this summer—remind us that climate change is about people, and our connection to nature's rule, not the weather.

Fortunately more leaders are recognizing the threat climate change poses to our towns and cities. New York Governor Andrew Cuomo made the connection clear from the start this week. "I think part of learning from [Hurricane Sandy] is the recognition that climate change is a reality. Extreme weather is a reality. It is a reality that we are vulnerable." Cuomo and other officials are discussing measures to protect their communities from future storm surges and floods.

These are important steps, but we must also attack the problem at its source: carbon pollution. We know how to power our economy with clean, renewable energy that doesn't run out and doesn't pollute. President Obama has presided over the largest increase in renewable energy in our nation's history. He has also issued new fuel economy standards that will cut carbon emissions from new cars in half and save drivers $1.7 trillion at the pump.

On Thursday, New York Mayor Bloomberg endorsed Obama, citing Hurricane Sandy, climate change, and the need for presidential leadership. Governor Romney, meanwhile, opposes those standards and wants to end wind incentives. If he becomes president, no doubt we can expect a surge in fossil fuels pollution and more climate paralysis.

We will continue to have hurricanes and floods no matter who gets elected on Tuesday. But I hope that we are maybe seeing the fierce partisanship around the mother of all environmental issues—climate change—thawing as Republicans and Democrats face the wrath of nature arm in arm, with the exception of course, of Mitt Romney—who continues to deny there is a problem and backs it up with anything he feels will play well for him.

I put my faith in young people to be a driving force in answering this challenge and maybe demanding that the childishness around climate change in Washington stop, immediately. They know their generation will pay the price if America doesn't start confronting climate change now.