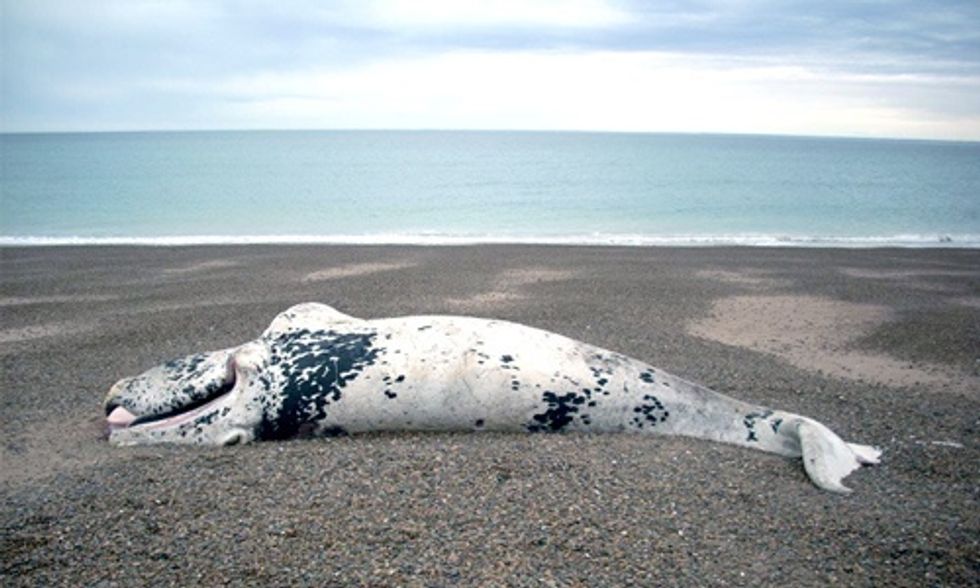 In Argentina baby whales have been dying off the coast in increasingly high numbers for the past decade and no one has known exactly why. "The average number of right whale deaths per year at Peninsula Valdes jumped more than 10-fold, from fewer than six per year before 2005 to 65 per year from 2005 to 2014," reports National Oceanic and Atmospheric Administration (NOAA) Fisheries West Coast Region. "Even more striking," they say, "90 percent of the deaths from 2005 to 2014 were very young calves fewer than three months old. The mystery killer appeared to be targeting the nearly newborn, sometimes more than 100 calves of the endangered species each year."

This is a right whale calf washed up at Peninsula Valdes, Argentina. New research indicates a likely connection between the deaths of hundreds such calves starting in the mid-2000s and blooms of the toxic algae Pseudo-nitzschia. Photo credit: Andrea Chirife, Southern Right Whale Health Monitoring Program

This will have a long-lasting effect on the southern right whale population, explains Dr. Mariano Sironi, scientific director of the Institute de Whale Conservation in Argentina.

"In 2012 we lost nearly one third of all calves born at the Peninsula. Southern right whales have their first calf when they are nine years old on average," he says. "This means that it won't be until a decade from now that we will see a significant reduction in the number of calves born, as all of the female calves that died will not be contributing any new offspring to the population."

Now, thanks to a report published in Marine Mammal Science, NOAA Fisheries and NOAA Ocean Service scientists and others from the U.S. and Argentina believe they have found the culprit: toxic algal blooms. These blooms have been found to pose a significant threat to fisheries and other wildlife, so it's no surprise that the blooms are wreaking havoc on whale populations, as well.

The correlation is not definitive proof that the algae caused the deaths, but is strongly suggestive.

“The numbers [of algae and whale deaths] hinge at the same point and have the same pattern,” said Cara Wilson, who led the study. “What's unusual about this is how long these bloom events continued to reoccur. You don't usually have deaths every year but the calves died in high numbers every year from 2007 to 2013.”

The findings have implications beyond Argentina and whales. Algal blooms are expected to increase worldwide due to climate change. And if one of the largest species in the ocean is susceptible to these toxic blooms, it's just further evidence that no species is safe. NOAA scientists are currently investigating mysterious whale strandings off the coast of Alaska. Between May and August of this year, at least 30 large whales in the western Gulf of Alaska washed ashore.

"Given the lack of solid evidence the new study does not definitively prove that the toxic algae caused the spike in deaths of whale calves. But it does offer strong circumstantial evidence, and that puts researchers in a better position to understand the possible impacts of future algal blooms," said Gregory Doucette, coauthor of the paper.

"For us, the more opportunities we have to try to examine that relationship, to link up these mortality events to potentially toxic blooms, the better we can assess the possible effects," he added.

California’s Wildfire Season Is Off to an Early Start