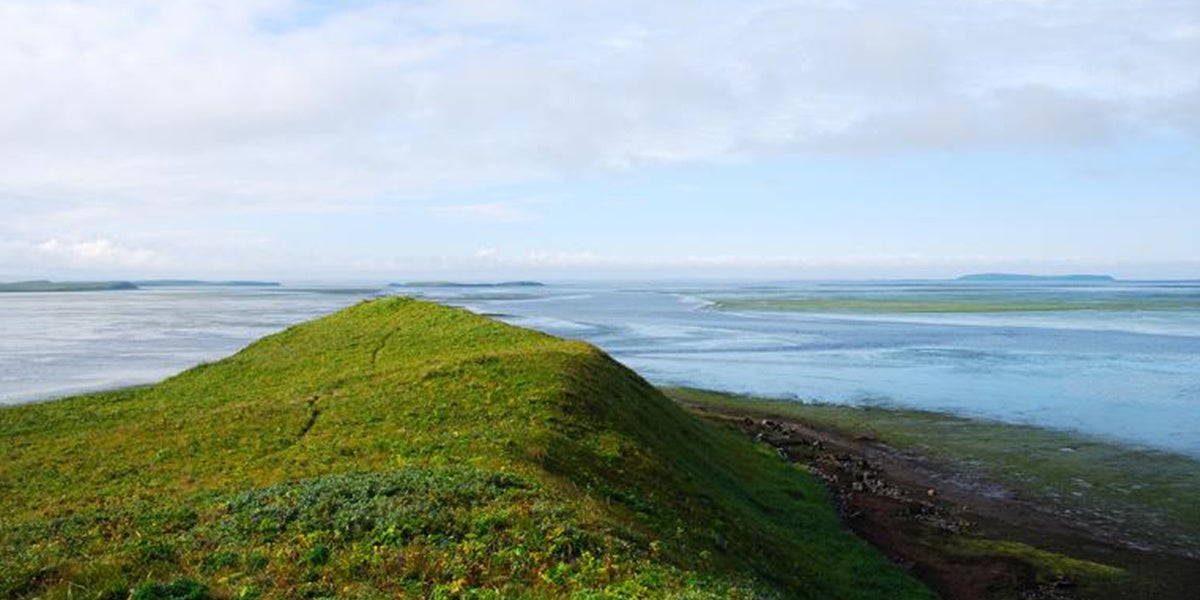 While the world was distracted by the government shutdown last Monday, Jan. 22, Interior Sec. Ryan Zinke signed a land-swap agreement with the King Cove Native Corporation to trade 500 acres of federal land in the Izembek National Wildlife Refuge, on the southern tip of the Alaska Peninsula, for tribal land of equal value. The land will be used to build a 20-mile gravel road connecting King Cove to the nearby city of Cold Bay for medical evacuations in poor weather, 11 miles of which will pass through the wildlife refuge.

Although many Alaskan legislators and King Cove residents celebrated the agreement, the land swap has faced opposition from environmental groups, subsistence communities and sportsmen. Izembek National Wildlife Refuge was the first area in the U.S. to be named a Wetland of International Importance at the Ramsar Convention in 1986. Even though it is the smallest of the 16 national wildlife refuges located in Alaska, Izembek contains more than 200 wildlife species, including brown bears and caribou. Millions of migratory birds, including 98 percent of the world’s Pacific black brants and the entire global population of emperor geese, rely on the vast stores of eel grass in the lagoons to feed during their journey along the Pacific Flyway.

“It is a very unique and extremely important ecosystem,” said Nicole Wittington-Evans, Alaska regional director of the Wilderness Society. The road “would really change the entire feel and wilderness character of this area.”

Subsistence communities in western Alaska, who have been involved in the area’s conservation efforts since the early 1980s, have also spoken out against the project. In an April 2017 statement against the road project to House Committee on Natural Resources, Myron P. Naneng, chair of the Sea Lion Village Corporation Board, cited impacts to subsistence resources like waterfowl and fish, increased ATV use, and the federal government’s legal obligation to subsistence communities under the Federal Subsistence Management Program as reasons the road project should not be built.

“Virtually the entire populations of Brant and Emperor geese depend on the Izembek refuge for feeding and staging, and because there are other effective transportation alternatives for King Cove, we cannot support this land exchange and road,” Naneng said.

Wilderness advocates worry that, in addition to the localized impacts, a road through the Izembek refuge could open a precedent for other infrastructure projects in federally designated wilderness areas.

“When you build a road, invariably, in spite of all the promises and safeguards that are made, ultimately it becomes a public road,” said Francis Mauer, retired wildlife biologist with the U.S. Fish and Wildlife Service and the Alaska chapter representative from Wilderness Watch. There is a historical precedent for this in Alaska. During the development of the Trans-Alaska Pipeline, Dalton Highway (originally called the Haul Road) was only intended to be used to support pipeline construction and to access the northern oil fields. Despite those promises, the road was fully opened to the public in 1994. Although the road through Izembek would be built under the auspice of providing access to medical services, it could also be used to connect the King Cove cannery operations to the Cold Bay Airport, as originally proposed in the city’s 1994 resolution.

Sportsmen are also concerned about the road. Barry Whitehall, a board member for the Alaska chapter of Backcountry Hunters & Anglers, wrote in High Country News in October 2017 that “any hunter who has experienced the Izembek National Wildlife Refuge … will never forget it.” He continued, “Construction of a road through the heart of Izembek’s wilderness lands would set a precedent endangering refuges and wilderness areas everywhere.”

Under the 1964 Wilderness Act, new roads and motorized vehicle use are banned in wilderness areas, save for rare instances of providing access to mining claims. All but 15,000 of the 315,000-acre Izembek National Wildlife Refuge has been inaccessible to motorized traffic since Congress designated it wilderness in 1980 under the Alaska National Interest Lands Conservation Act—the same law that designated wilderness in the Arctic National Wildlife Refuge, in which Congress lifted a decades-old ban on oil and gas drilling in December.

The U.S. Fish and Wildlife Service has reviewed and rejected the road project multiple times due to the irreparable damage it would cause to the ecosystems in the refuge. After Congress authorized a similar land exchange in 2009, U.S. Fish and Wildlife Service conducted a four-year environmental impact assessment and rejected the project in 2013 due to the predicted adverse effects on habitats and wildlife.

“Simply exchanging lands will not compensate for myriad ripple effects on habitat and wildlife due to uses on and beyond the road, nor would new lands provide habitat for all the same species,” the report says.

King Cove, population 938, according to the 2010 census, is largely occupied by the Agdaagux tribe and fisherpeople. Its economy depends on the year-round commercial fishing and seafood-processing industries, particularly the Peter Pan Seafoods facility that employs at least 500 townspeople and boasts to be one of the largest cannery operations in Alaska.

The area is also known for its storms—King Cove sits in a constricted mountain valley nestled between two volcanic peaks. Gale-force winds are common, making air transportation in and out of town difficult. The city reported 18 deaths in the past 30 years attributed to plane crashes or lack of access to medical treatment. The proposed road would connect the town to the all-weather Cold Bay Airport, where King Cove residents can fly 600 miles to Anchorage for medical care.

“We have spent decades fighting for this road for one reason—it is critical for our survival,” said Della Trumble, spokeswoman for the King Cove Native Corporation and a member of the local Agdaagux tribe, in the King Cove press release on the topic. “We have already lost too many friends and loved ones for there to be any legitimate reason to oppose this agreement. A small road connecting two remote communities may not seem like an important issue to many people, but to us, it is a lifeline to the outside world.”

The gravel road, however, may not be the best solution for the community’s medical needs. Dr. Peter Mjos, former medical director for the Eastern Aleutian Tribes, described the road as a “calamity-in-waiting” in a 2013 letter to then-Interior Secretary Sally Jewell. “Any vehicle or ambulance attempting transit or rescue in such conditions could be suicidal, rescue impossible, rescuers gravely imperiled,” Mjos detailed.

The federal government has proposed numerous alternatives to the road. Congress funded a hovercraft for the community in 1998, but the Aleutians East Borough discontinued its use in 2011, claiming it could no longer afford the $1 million in annual operating costs. A 2015 assessment by the U.S. Army Corps of Engineers proposed a ferry capable of carrying passengers to Cold Bay year-round with 99 percent dependability based on historic wind data along the projected route. Mjos also described the ferry as “the safest, most reliable, most viable, and most cost-effective medical evacuation solution for the residents of King Cove.”

There may be more than just medicine motivating the road’s construction. The city of King Cove passed a resolution in 1994 stating that the road would link the salmon cannery in King Cove with Cold Bay Airport with no mention of the health and safety concerns. Alaskan politicians throughout the years have cited the commercial benefits of the King Cove road as the raison d’être for its construction—only recently has the issue of access to health care come into play.

Certain Alaskan legislators have long been invested in the King Cove road project. Following the agreement’s signing, Sen. Lisa Murkowski, the Alaskan Republican, convened Zinke, King Cove residents, Gov. Bill Walker, Sen. Dan Sullivan and Rep. Don Young for a news conference to celebrate the achievement. The Murkowski family has advocated for legislative action to make the King Cove road a reality for two decades. The current senator’s father, Sen. Frank Murkowski, first introduced the King Cove Health and Safety Act, which would have allowed construction of the road, in 1997. Then-president Bill Clinton threatened to veto the bill, but it ultimately died in the House. In 2007, Sen. Murkowski reignited the debate with a proposed bill for a land exchange, and has been working toward bringing the road to fruition ever since.

Murkowski is one of the leading Senate voices on rolling back protections for federal land. She has consistently advocated for increasing oil and gas production in the Alaska National Wildlife Refuge and spearheaded a 2016 bill to favor oil and gas development and prevent conservation designations on federal lands in Alaska. Now, she has support from the top.

The King Cove road project “is [the Trump administration] taking its chance, like it’s done on a host of other conservation issues,” said Dan Ritzman, Alaska program director at the Sierra Club. “This administration, which is willing to do and try anything, gave Senator Murkowski this window to move on this action.”

The King Cove road project has received a surprising amount of attention from the White House. The Washington Post first reported on the inner workings for the deal, which was described by Interior officials as an internal “push” from Zinke, in October. According to emails obtained by the Defenders of Wildlife in a series of Freedom of Information Act requests, Interior officials made a concerted effort to conceal the plan in fear of how the public would respond. But President Trump reportedly took personal interest in the issue after The Washington Post’s story was published. He reportedly sent a copy of the paper to Murkowski with the message, “Lisa, we will get it done.”